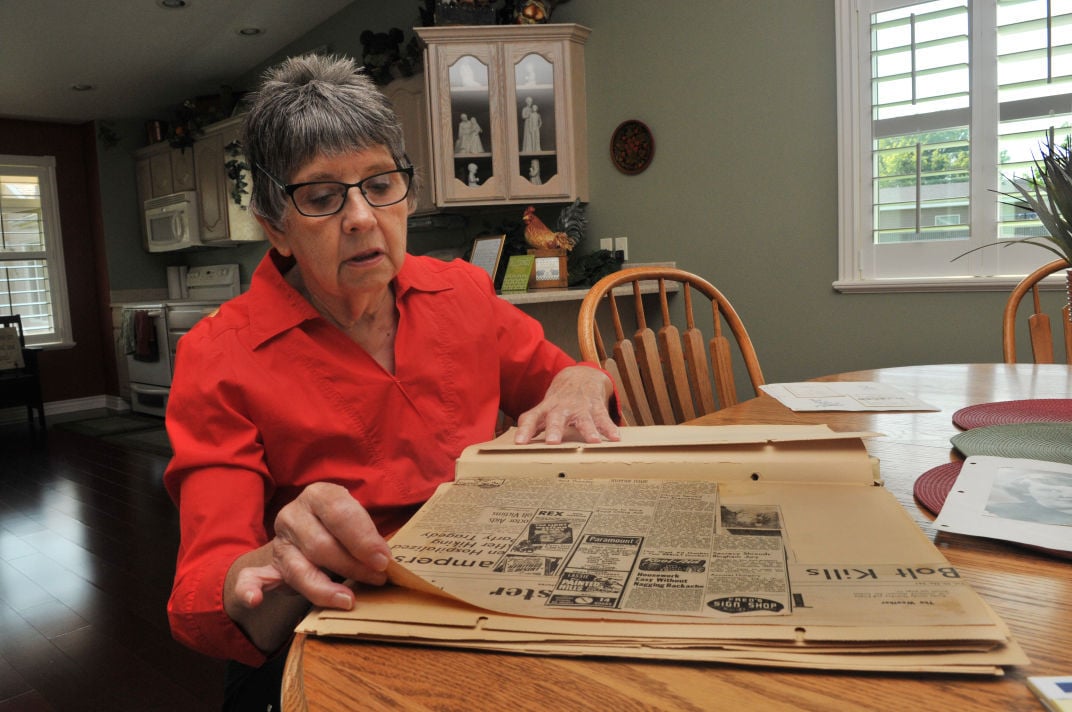 Karma Lambert, of Burley, looks over newspaper clippings from a 1951 lightning strike that killed four of her fellow church camp hikers and a youth leader near Driggs. 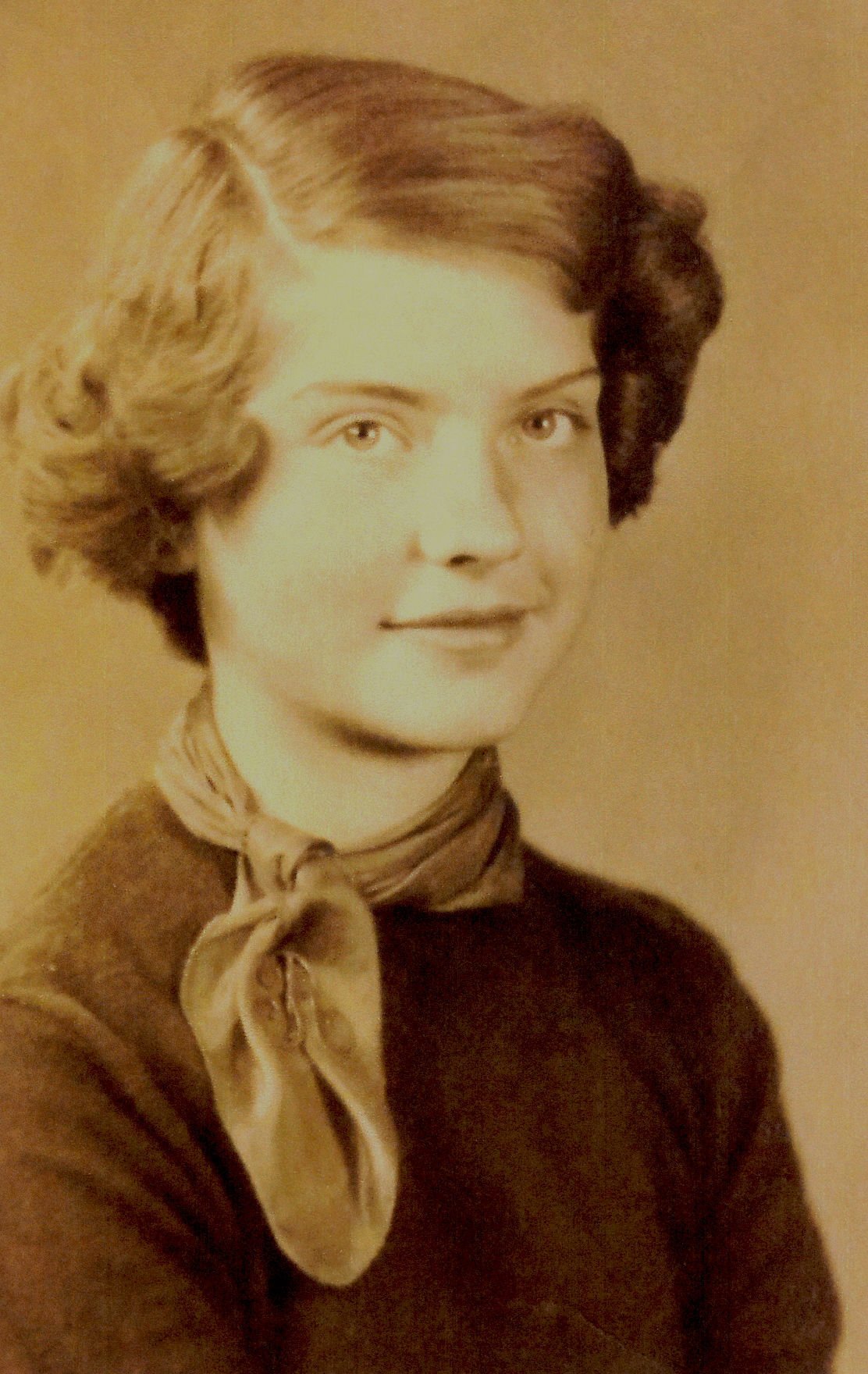 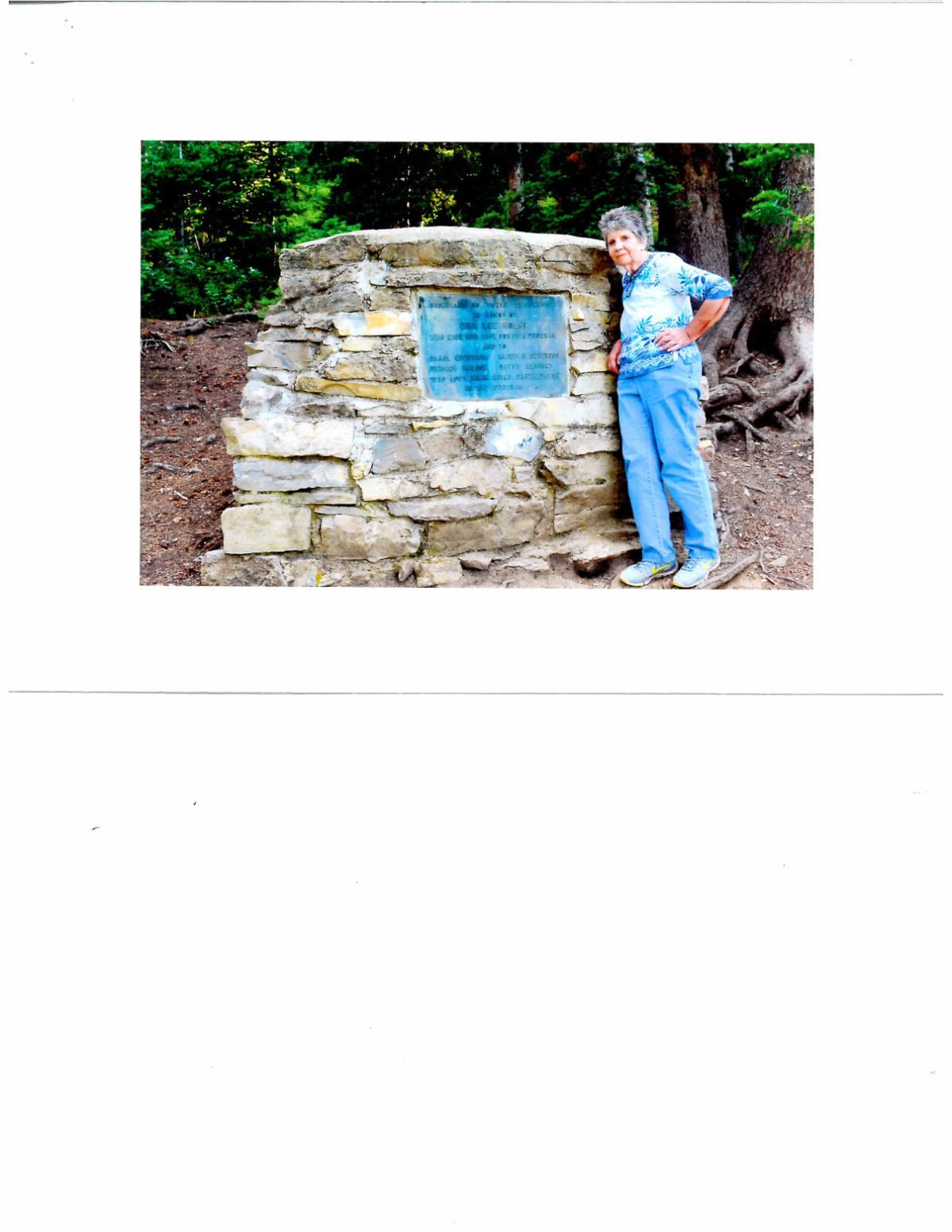 Karma Lambert of Burley hikes to the monument on Aug. 2, in memory of her friends and youth leader who were killed by lightning on Aug. 1, 1951.

BURLEY • On Aug. 1, 1951, four girls and their youth leader were killed when lightning struck a tree during their church camp outing near Driggs.

Sixty-four years later, one survivor of the group, who had gathered for a picnic lunch under a balsam pine tree, took her children and grandchildren on a trek back to the spot to see the memorial plaque she helped erect a month after the tragedy.

“It was very emotional to think about what was lost and all that could have been,” Karma (Rasband) Lambert said. “I had my family with me the day I returned, and I thought about those girls who never had a chance to have a family."

In 1951 Lambert was a 14-year-old living in Idaho Falls with her single mother — who did not own a car.

“We walked everywhere and there were no summer vacations, so church camp was a big deal for me,” said Lambert, who is now 78 and lives in Burley.

Lambert was eager to participate in all the activities and was surprised that only 35 of the 150 girls at camp signed up for the Darby Canyon hike to the Wind Caves and Ice Caves that morning.

After some discussion with their hiking guide, Fred Miller, about canceling the hike due to inclement weather, the sun came out and the group set off for the day.

Earlier that morning, Holtz was overheard saying that she had not planned to go on the hike, but reconsidered after she learned that three of her charges were going.

After a morning’s hike up the mountain, they reached the dark Wind Caves. They planned to tour the caves, eat lunch and then go to the Ice Caves. Lambert had a flashlight with her so Severson and Holtz, who did not, stayed close by.

When they came out of the cave, it was raining.

Engstrom, always outgoing and the life of any party, exited the cave first with her buddy Malone and they ran off down the mountain to stake out a tree where the group of friends could have lunch.

The last thing Lambert remembers before being carried off the mountain on a stretcher, was coming out of the cave with Severson and Holtz.

Lambert believes she must have stood up at the command — which may have saved her life — as the bolt of lightening struck the tree.

“I was the only one under that tree that survived,” Lambert said. “And everyone else on the hike was “knocked flat.”

Lambert’s daughter, Suzanne Kloepfer, said a nurse who was on the hike with the girls, saw her mother “flinch” afterwards and started artificial respirations on her.

Several of the other hikers ran back to camp for help.

As the community rallied to help to the victims and church camp, the news of the accident spread and soon the highways were jammed with carloads of frantic parents, who did not yet know if their child was injured or killed.

A doctor who went up the mountain to help walked partway down with Lambert on the stretcher. She was deemed the most critically injured and he wanted to make sure she continued breathing on her own.

“He held up a pair of shoes and asked if they were mine and the soles were blown off of them,” Lambert said.

Merlin Kay was one of the farmers who brought horses to help carry the girls who perished down from the mountain.

“I remember him talking about the little girl that he brought down off the mountain,” his daughter Sandra Warren said. “She was wrapped in a blanket. He was haunted by the memory of her long blond hair that hung out of the blanket and across his horse. The men that did that were really impacted.”

Lambert had a burn on her hip where she carried her metal flashlight and her nylon panties had melted into clumps.

“There were red streaks all over my body,” she said.

She was treated at the hospital and released the next day but a doctor who visited the home afterwards told her to stay quietly in bed for a while and avoid emotional upset.

Kloepfer said her aunt recalls the family unplugging the phone and disconnecting the doorbell for a month afterwards to prevent Lambert from startling when they rang.

Because of the doctor’s orders to avoid becoming upset, she was not allowed to attend her friend’s funerals.

To Honor Those Lost

In June, Lambert’s family began discussing making the hike to the memorial plaque that stands at the spot. Lambert’s children and grandchildren were eager to learn more about this piece of family history.

Although Lambert has two hip joint replacements and one knee replacement, she walks two miles a day and felt up to the challenge.

“I didn’t know how I was going to climb a mountain, but I was willing to try,” she said.

The hike, which usually takes about 4 hours, turned into trip of 11 hours as Lambert took frequent rests and told her tale many times to hikers on the trail.

When they arrived at the memorial, Lambert was filled with emotion.

The memorial plaque was made by Hortz’s husband, who worked at a foundry, and Lambert was among the people who gathered stones from the site a month later as it was set in cement.

The plaque is dedicated to the youth and leader who gave their lives for the program.

But, Lambert was disappointed that no one seemed to know the story behind the monument, even the hiking guides who gives tours on the mountain.

“As I stood there, it made me realize how precious life is and precious our friends are and how quickly life can vanish,” she said.

As children, Kloepfer said, they often teased their protective mother by running outside during lightning storms and dancing in the yard. But, the full impact of what her mother endured was revealed to the family that day.

“Mom had always taught me to be grateful for my leaders and for how they serve us,” Kloepfer said. The lessons now carry a clearer meaning as she thinks about Hortz’s life and how she left behind a husband and two children.

Although the family planned a devotional at the monument, there was not time for it and the family became worried about getting off the mountain before dark.

“We were really quite concerned about mom at this point,” she said.

Lambert’s grandchildren took their shoelaces out of their shoes and the family used T-shirts and poles to construct a makeshift stretcher to Lambert part way down the mountain.

As they made their way down the mountain, hikers showed kindness by sharing supplies and offering encouragement.

Although the hike proved more daunting than expected, Lambert was able to pay homage once again to those who lost their lives that day and share the experience and story with her family.

“I think that this really gave her that piece of closure that she never got back then,” Kloepfer said.

Karma Lambert, of Burley, looks over newspaper clippings from a 1951 lightning strike that killed four of her fellow church camp hikers and a youth leader near Driggs.

Karma Lambert of Burley hikes to the monument on Aug. 2, in memory of her friends and youth leader who were killed by lightning on Aug. 1, 1951.