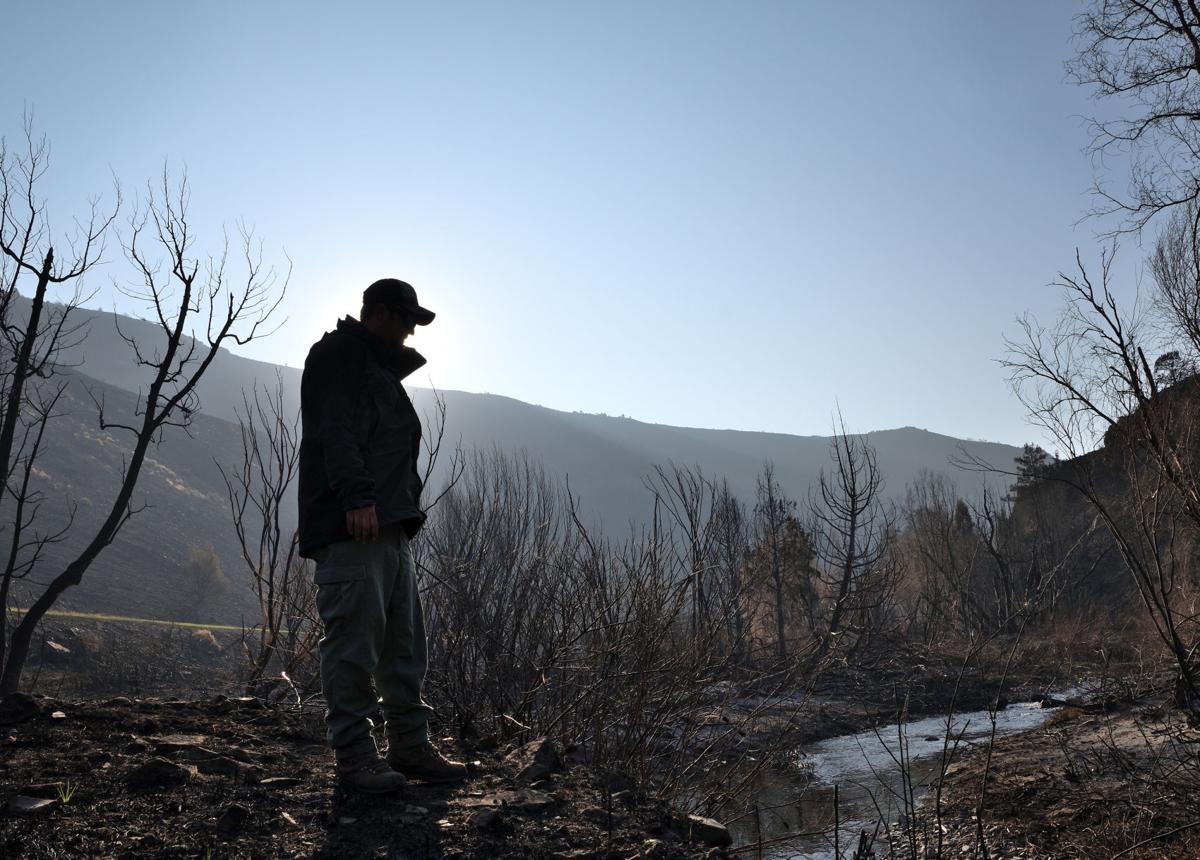 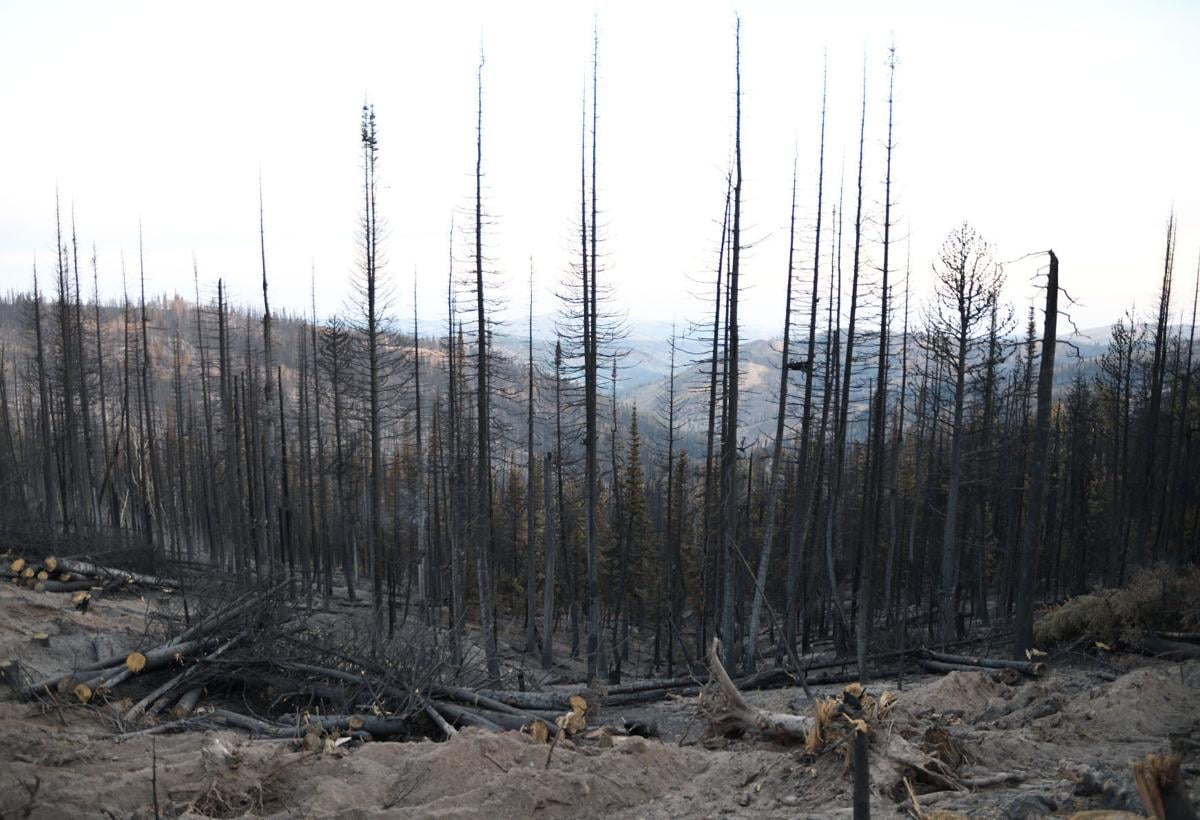 Dead conifers line the side of the road Oct. 9 near Monument Peak. 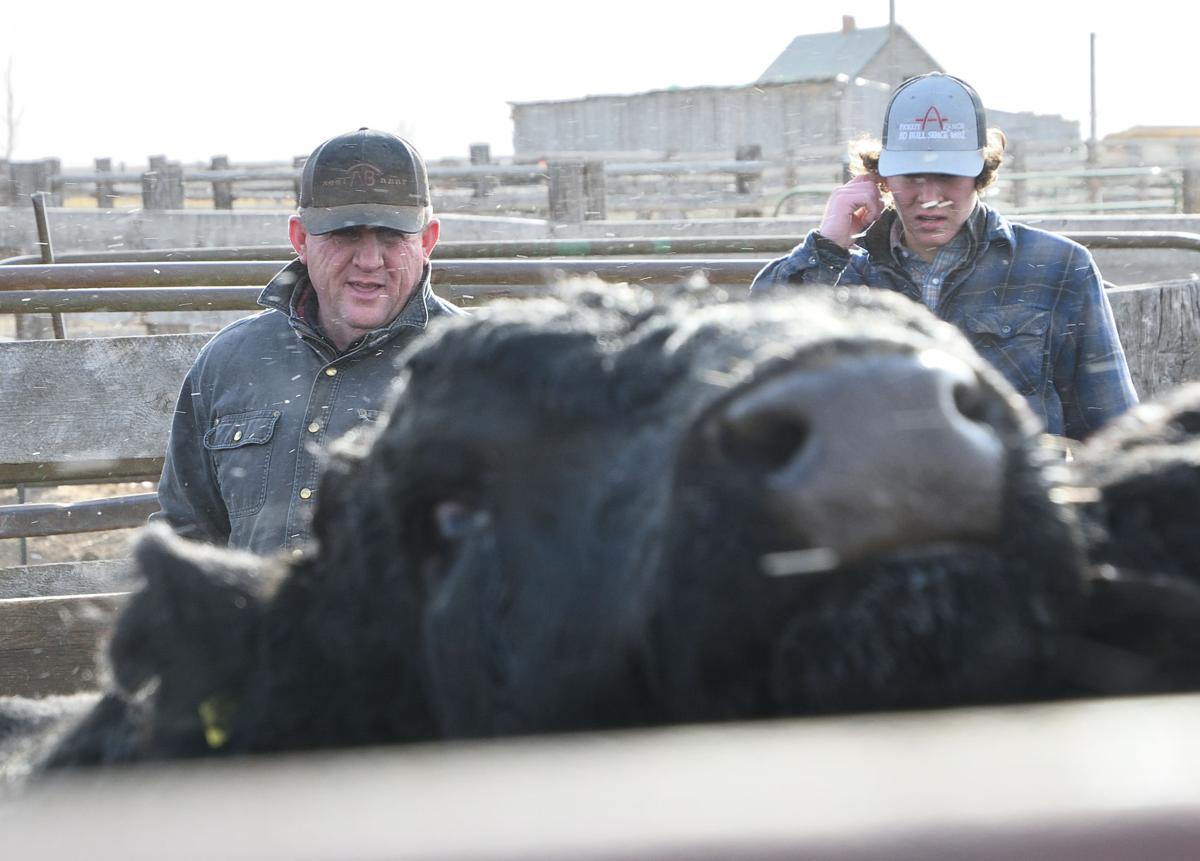 BURLEY — Green shoots are starting to pop up on the 90,190 acres of South Hills forest and grazing land blackened in the Badger Fire.

Restoration and seeding efforts started following the fire that was sparked Sept. 12 are paying off.

“I think the way it looks will be a shocker for folks,” said District Ranger Randy Thompson, with the US Forest Service Minidoka Ranger District.

The burned areas will appear “naked,” despite the sprouts already coming up, but within two years it will begin to fill in, he said.

Thompson said Forest Service members cried and wrung their hands after the fire. Then they made plans. Now it is time to work, he said.

The fire provides opportunities for change and new growth.

“Visually it will be totally different,” Thompson said. “But, it will be good too.”

Too early to tell

The wind-driven fire jumped around and burned hot. From 40,000 feet up, what was left looks like a black mosaic pattern across the forest, Thompson said. Erosion will occur, he said, but the extent is still unknown and the area will be under continual evaluation.

Thompson said after the fire was extinguished, an emergency response was launched to remove hazards like burned trees. Over the fall and winter, restoration efforts began, including mastication of juniper skeletons, which will help newly laid seed take root. To date, the Forest Service has performed broadcast seeding on 700 acres, and through a partnership with other organizations seeded 4,500 acres in sagebrush.

“It’s still too early to tell how much of the seeding was successful,” Thompson said. “There’s still a lot of snow up there.”

A week ago coming up through Rock Creek, he said, they still couldn’t get past Diamond Field Jack because of the snowpack.

The Forest Service would like to reseed about 15,000 acres with a natural seed mix native to the area. Seeding has been hampered, Thompson said, due to lack of funding and a shortage of seed. The need for the seed simply outweighed what nurseries had in stock.

The agency is working to secure more funding but they will wait for the optimal time to plant to ensure the best results, Thompson said.

“Timing is very important,” he said.

There was some wildlife loss but they don’t know yet how the animals fared over the winter.

“We know they moved their winter range,” he said.

Most of the roads have not suffered any washouts from the fire damage so far this spring, but the risk is still there and some roads may be difficult to travel due to packed ash.

“People shouldn’t tear through the muddy roads, not only for their safety but to help keep the roads in place,” Thompson said.

The Forest Service will concentrate on restoring burned areas for a couple of years, and any extra road damage may not get addressed right away.

Last year, a lot of trails were torn up by off-road vehicles.

All trails and campgrounds in the area will remain closed until they can be accessed by a specialist for the risk of falling rock.

One campground in the Rock Creek area is marked with barriers and will be unavailable.

“My biggest concern is not getting anyone hurt,” Thompson said. “There is always a little risk but I want to make sure everyone is safe.”

The Forest Service has an interactive webpage with information on the Badger Fire area.

“I think we’re in pretty good shape,” he said. “This summer will be tough but we are ready to move forward. There is opportunity here to do some things that needed done and work with our partners.”

The fire will give the agency an opportunity to tackle some projects like the Rock Creek Corridor Plan and upgrading Father and Sons campground, an area the fire burned around.

Heather Tiel-Nelson, a spokesperson for the Bureau of Land Management, which had 13,557 acres burned during the fire, said the agency aerially seeded the entire acreage with a variety of forbs, grasses and brush seeds. After the seeding, they pulled a heavy anchor chain across about 3,000 acres of accessible terrain to ensure the seed was covered and give it the best chance for growth.

“It is really too early to tell the success of the rehab efforts so far,” Tiel Nelson, wrote in an email. “Monitoring of the rehabilitation efforts is anticipated to begin this summer.”

The BLM has three grazing allotments that burned and were seeded. Seeded areas will be rested from grazing until the agency’s stabilization and restoration objectives are met, she said.

The Forest Service has 13 grazing allotments for cattle, horses, sheep and goats in the burn area.

Thompson said they have purchased the materials to replace grazing allotment infrastructure lost during the fire including water troughs and fencing, but it hasn’t been put in place yet.

“They (the grazing permittees) have been great to work with along with all of our partners,” Thompson said.

Other agencies, organizations and clubs have stepped up to help evaluate, provide funding and work on restoration projects, he said. And it couldn’t be done without everyone working as a team.

PHOTOS: Recovering from the Badger Fire

This multi-part series on the Badger Fire explores its eﬀects on South Hills wildlife, biology and ecology. See the whole series here.

The Badger Fire: Drama in the treetops

It's time for part 2 of our series on the Badger Fire's impacts. It's a little lesson on the birds and the trees that you won't want to miss.

As the forest begins to regenerate after the Badger Fire, elk and moose will probably be OK. Mule deer — the South Hills' most abundant ungulate species — are going to struggle. But there are also things you can do to help them.

It's not clear when recreation will return to the South Hills or what it will look like when it does. But when it does, the people who use the area say they hope they'll be involved in making improvements.

Rising from the ashes: How the South Hills will recover from the Badger Fire

Rehab efforts have already begun in the South Hills. The land is starting to come back.

The inside scoop: Why I wrote these stories

The South Hills is criminally underrated.

An employee at a meat packaging company who police say threatened a coworker with a pipe wrench changed his plea to guilty on Tuesday.

It may soon cost Burley residents a little more to go swimming at the city pool, rent a city park pavilion, or use some city services like high pressure water or sewer connection. 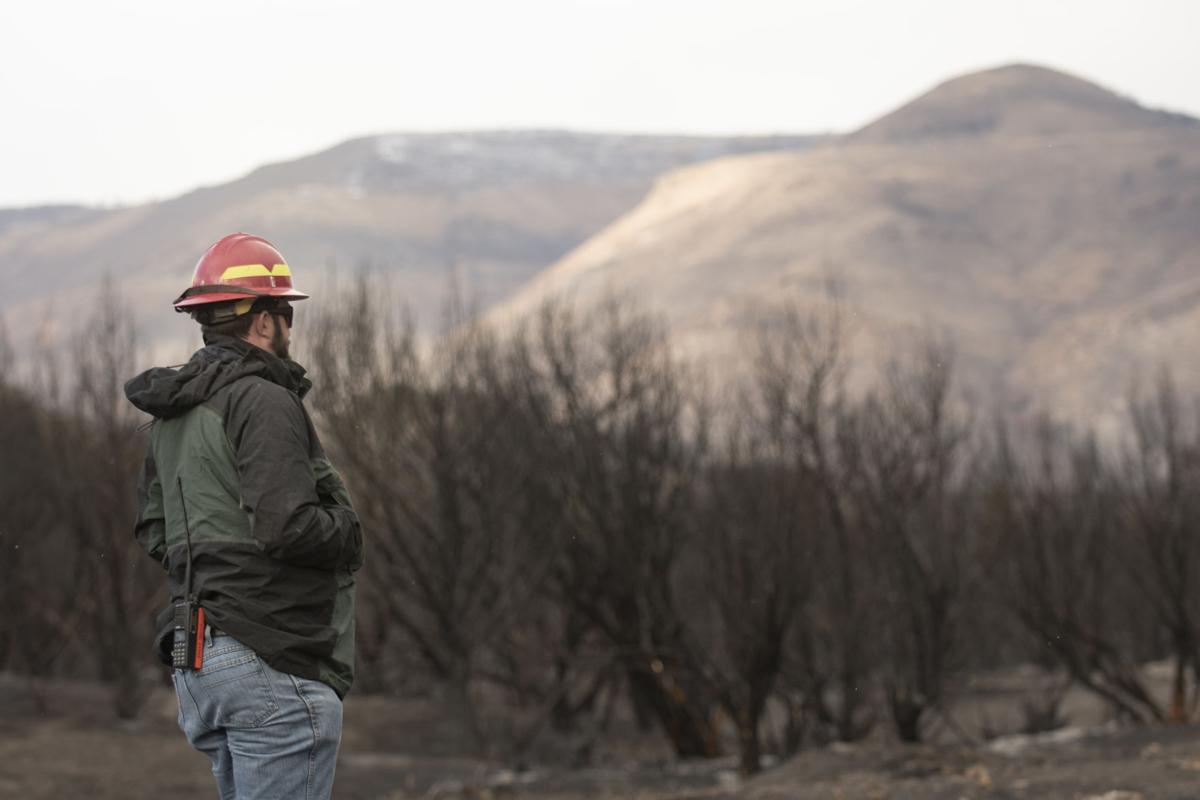 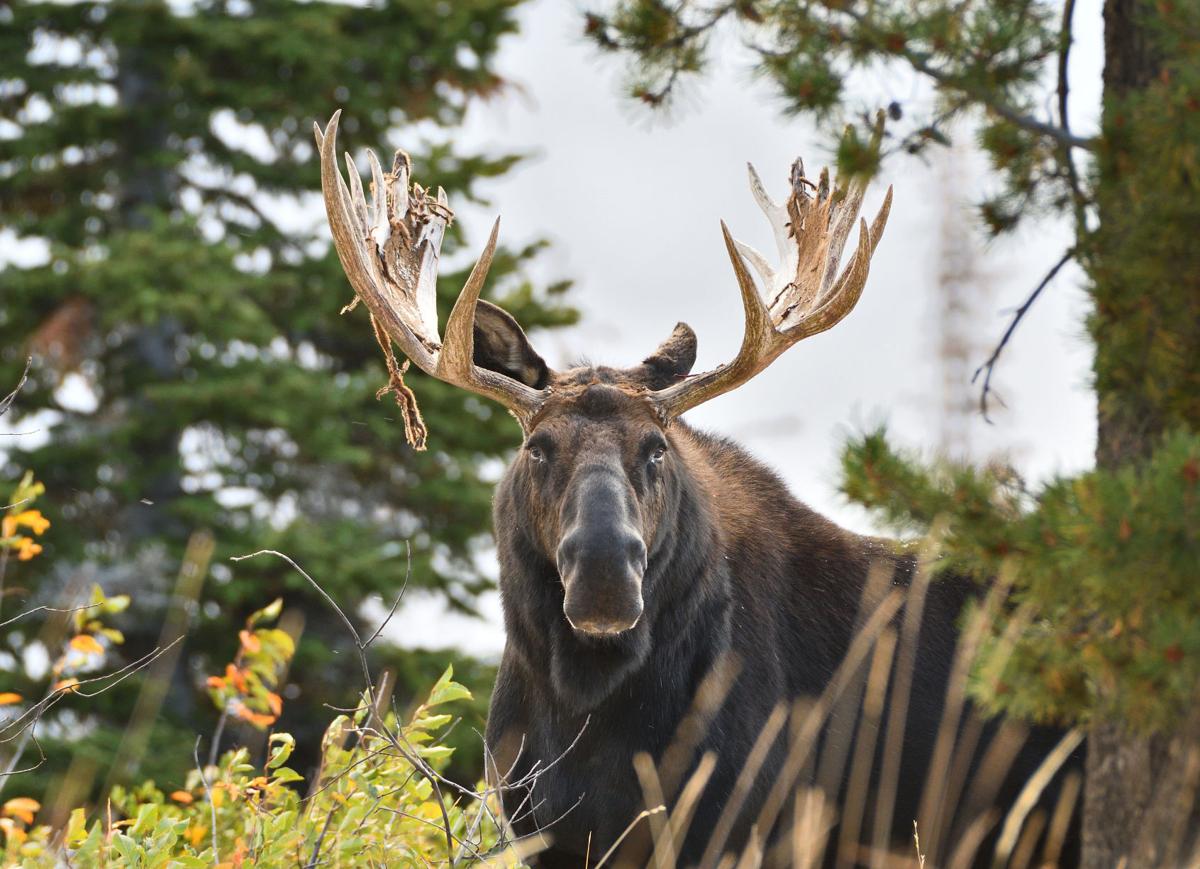 A South Hills bull moose roams around a prescribed burn area in September. Moose could experience a short-term shortage of food due to the Badger Fire, but in the long term the blaze could be beneficial for the aspen and willows the animals eat.

Dead conifers line the side of the road Oct. 9 near Monument Peak. 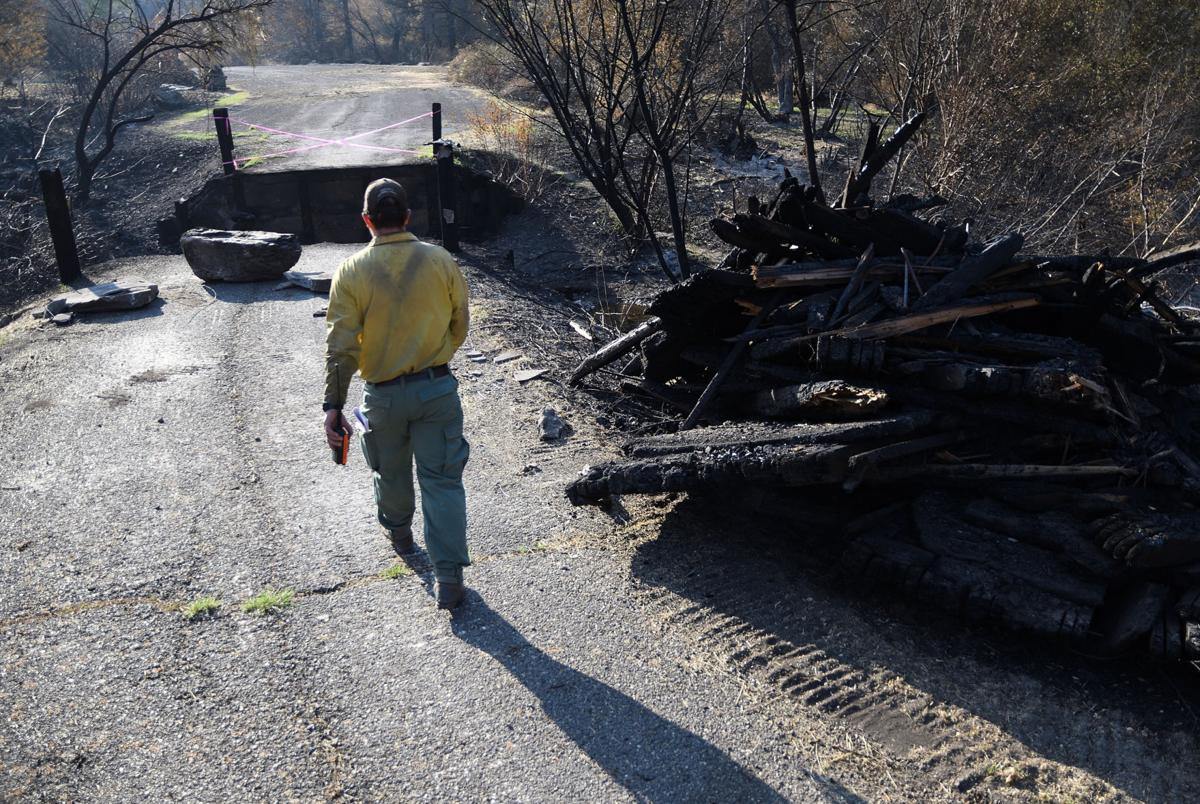 Scott Soletti walks past the wood remnants of the bridge at the Harrington Fork picnic area.