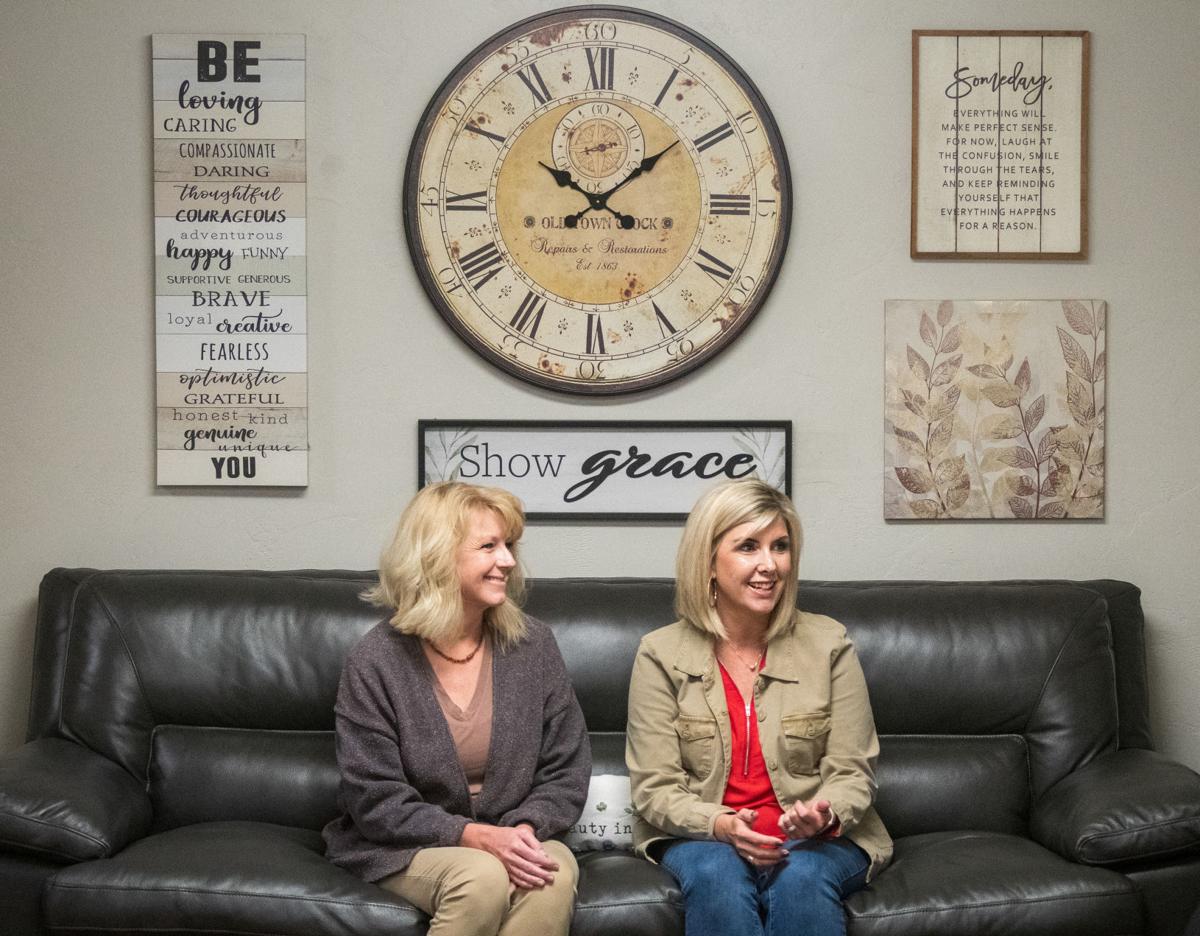 Nancy Winmill, administrative director with Simply Hope, and creative director Sheri Allred talk about why their nonprofit means so much to them and the community Thursday at their new facility in Burley. 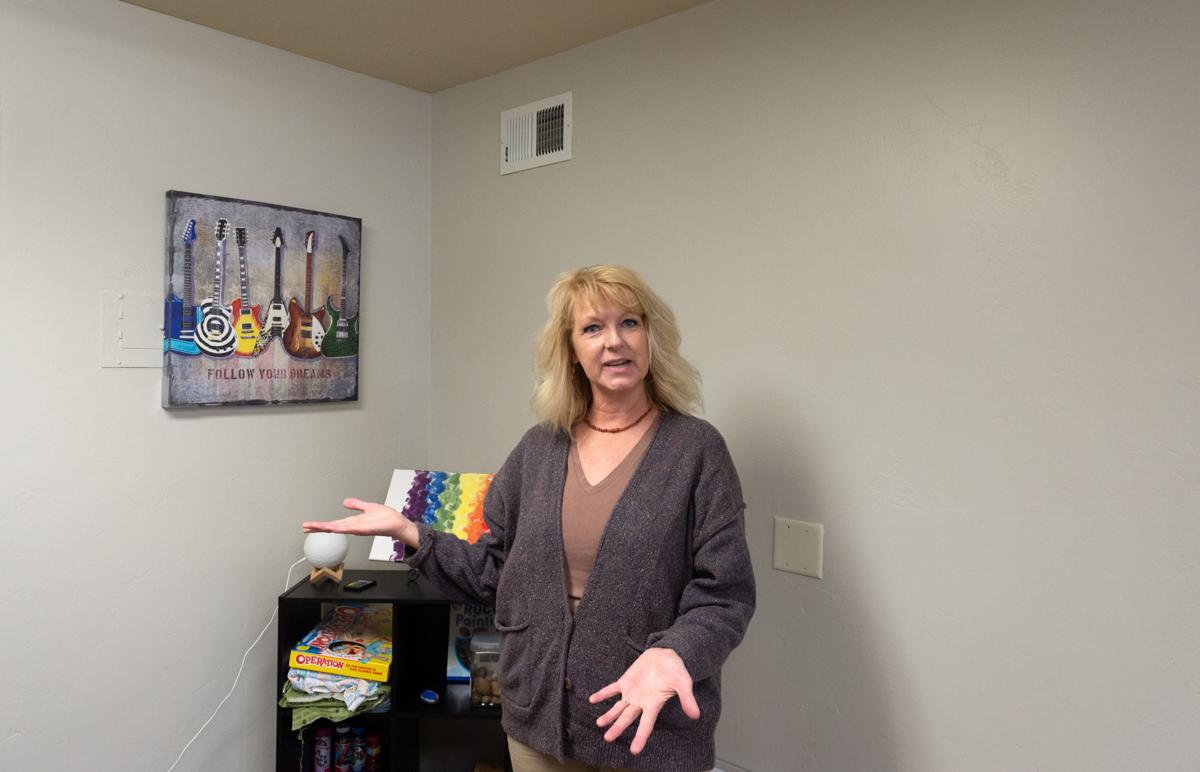 Sheri Allred, creative director with Simply Hope, talks about their new Teen Hope area Thursday at their facility in Burley. 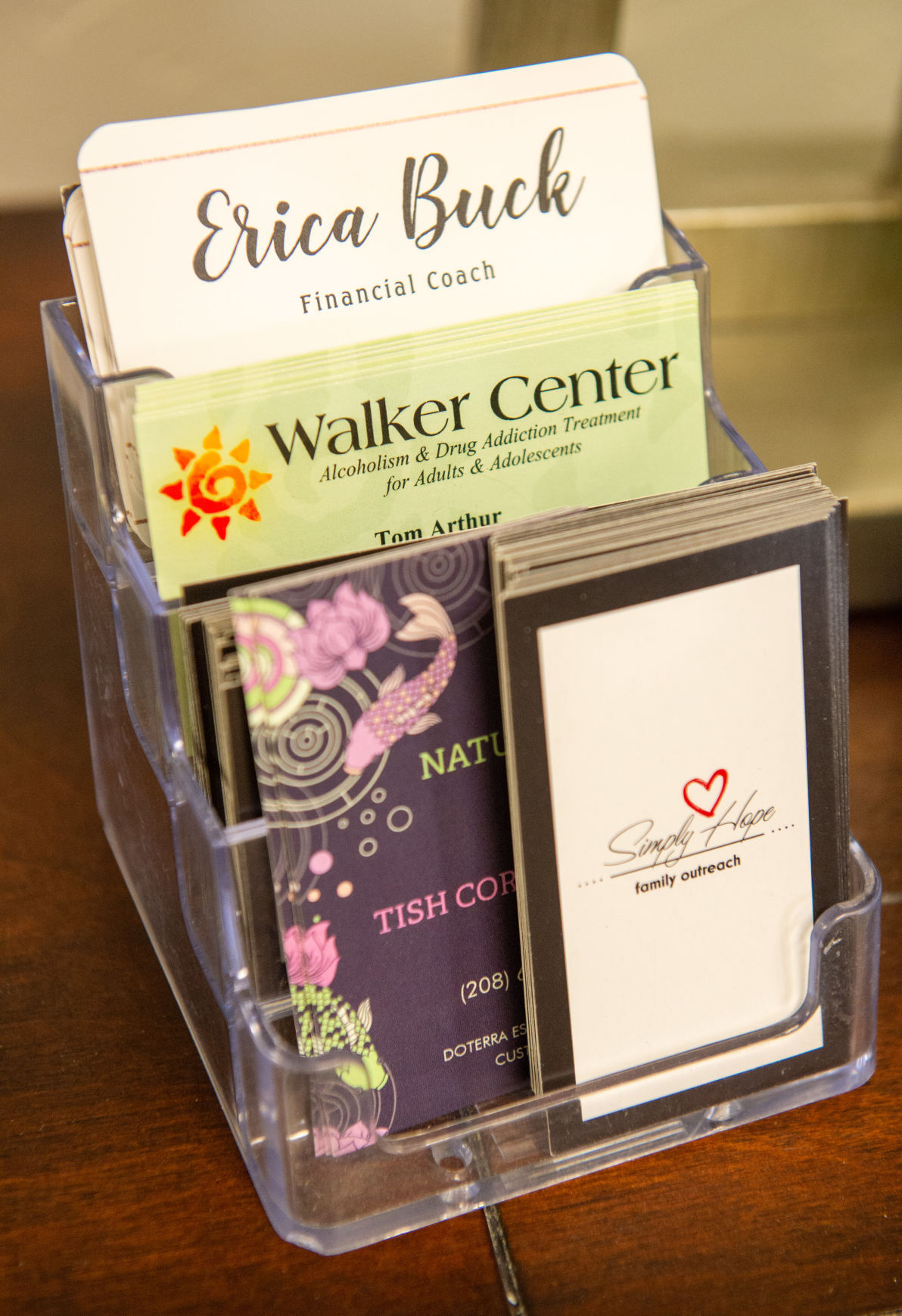 Simply Hope is a nonprofit that facilitates a number of programs in the hopes of strengthening the community. 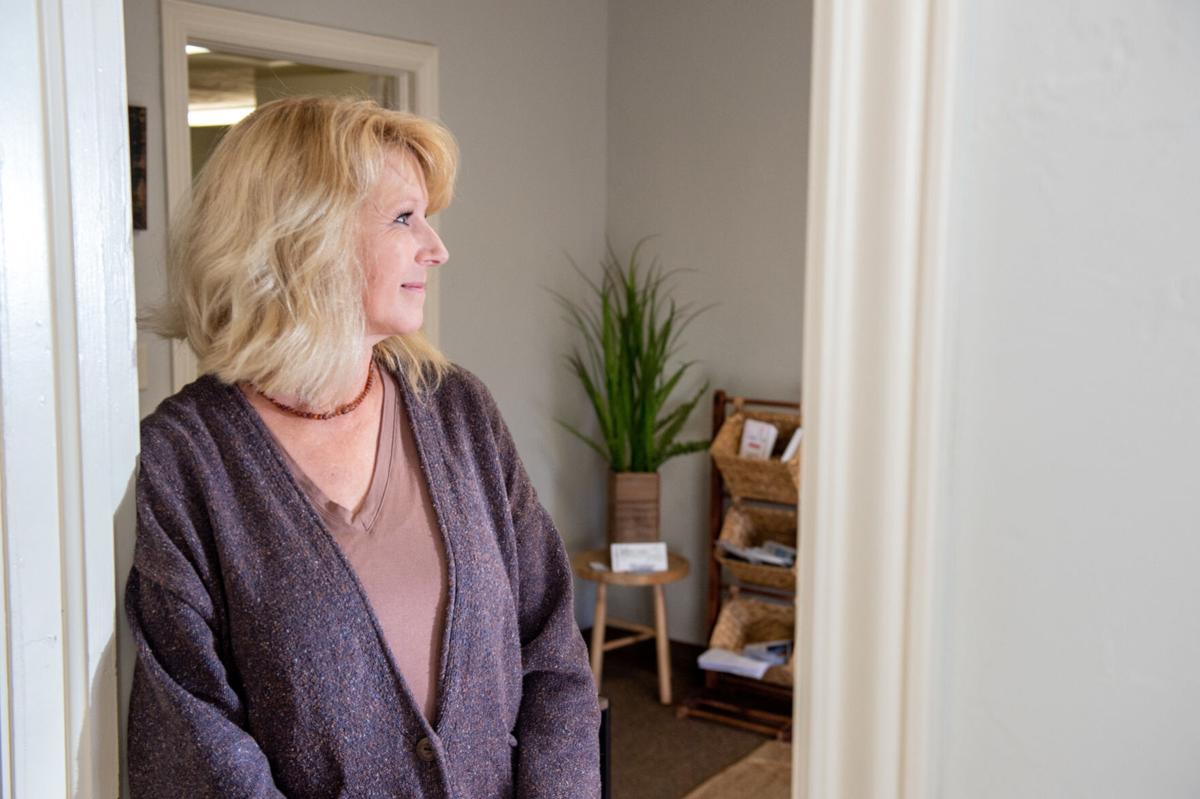 Sheri Allred, creative director with Simply Hope, answers any questions about the new building and the nonprofit's programs Thursday in Burley.

Nancy Winmill and Sheri Allred met while they were both secretaries at Burley High School. They formed a bond by sharing their struggles with each other about their children who dealt with addiction.

“We made that connection because we both had kids with these problems and we were looking around the community for resources and didn’t find any,” Winmill said.

Most resources, she said, were tailored to people on probation and parole, sponsored by churches or part of AA, which did not fit their needs.

Nearly seven years ago they opened Simply Hope, a volunteer, nonprofit organization that offers free support groups that address codependency, divorce, addiction and grief, along with other family issues. The programs are open to people across Mini-Cassia.

The outreach also connects people with resources within the community and offers some paid programs including Hope Through Art, which has a $10 fee, and Sounds of Hope, which costs $10.

Right now Teen Hope meets at 5:30 p.m. on the first and third Tuesdays of the month, but they hope to have it open on weekdays after school in January.

Simply Hope, which continues to grow, recently moved to 1323 Oakley Ave. Suite 20. There is space in the new building to create a teen center, separate from the adult group meeting spaces.

They are looking for volunteers, who must undergo a background check, to teach robotics and science projects, art, sewing, music, vlogging, offer homework help and drug and alcohol education to teens ages 13 to 18.

All teens are welcome who want to be creative, need a tribe of their own and want to hang out and are willing to give back to the community or need mental health support.

There will also be a kitchen where teens can learn to make simple meals and have snacks.

To volunteer or make a donation, text 208-679-9401 or email simplyhopefamilyoutreach@gmail.com.

For Winmill, the journey to help other families began after her son, who was in two car accidents, became addicted to opioids and was found nearly dead after an overdose.

Experiencing his death rattle breathing and later hearing an emergency room doctor say he did not know if they could save her son changed her life.

“I was stunned,” Winmill said. She knew she could not stay quiet about the issue any longer.

Allred said often addicts think their behaviors and problems affect only them.

“But it cuts a big swathe out of the family,” she said. “A lot of people get caught up in it and really you have to address the whole family.”

It only takes one person in a family to change their thought processes and take it home to help enact change in other family members, Allred said.

Winmill said women especially are taught to be nurturers and to sacrifice for their families.

“You can love them to death, literally,” she said. But, what many people don’t understand that is that doling out tough love to your child is really tough on parents, and that’s where the support groups for families comes into play.

People often want to hide family flaws, Allred said. Admitting that there is a problem within the family is the first step.

Even if a family talks publicly about the issue, they often find little support, Winmill said.

“Nobody brings a detoxing family a casserole,” Allred said.

So it has become a Thanksgiving tradition at Simply Hope to have a potluck dinner where everyone brings a casserole to support each other, Winmill said.

Connecting with other people in a group and understanding you are not alone can change your life, she said.

They have witnessed so many miracles occur in the more than 100 families they have served, Winmill said, and now they want to create those miracles for teens.

BURLEY — Justin Jensen, of Heyburn, has dedicated his life to helping others during their worst moments.

The pandemic has been hard on many businesses, especially ones that require in-person activities like bowling. But a Burley alley used the pandemic to its advantage, and now has doubled its staff to keep up with the demand for its pizzas.

Nancy Winmill, administrative director with Simply Hope, and creative director Sheri Allred talk about why their nonprofit means so much to them and the community Thursday at their new facility in Burley.

Sheri Allred, creative director with Simply Hope, talks about their new Teen Hope area Thursday at their facility in Burley.

Simply Hope is a nonprofit that facilitates a number of programs in the hopes of strengthening the community. 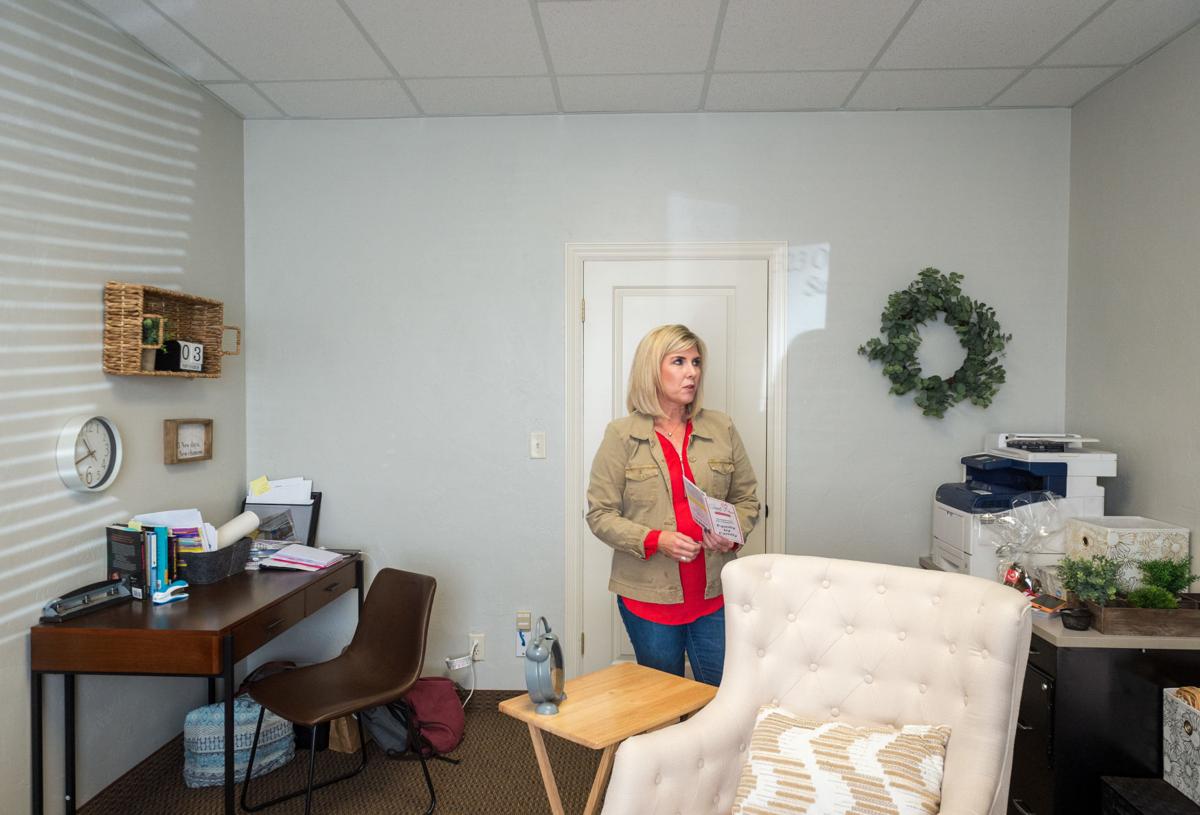 Sheri Allred, creative director with Simply Hope, answers any questions about the new building and the nonprofit's programs Thursday in Burley.