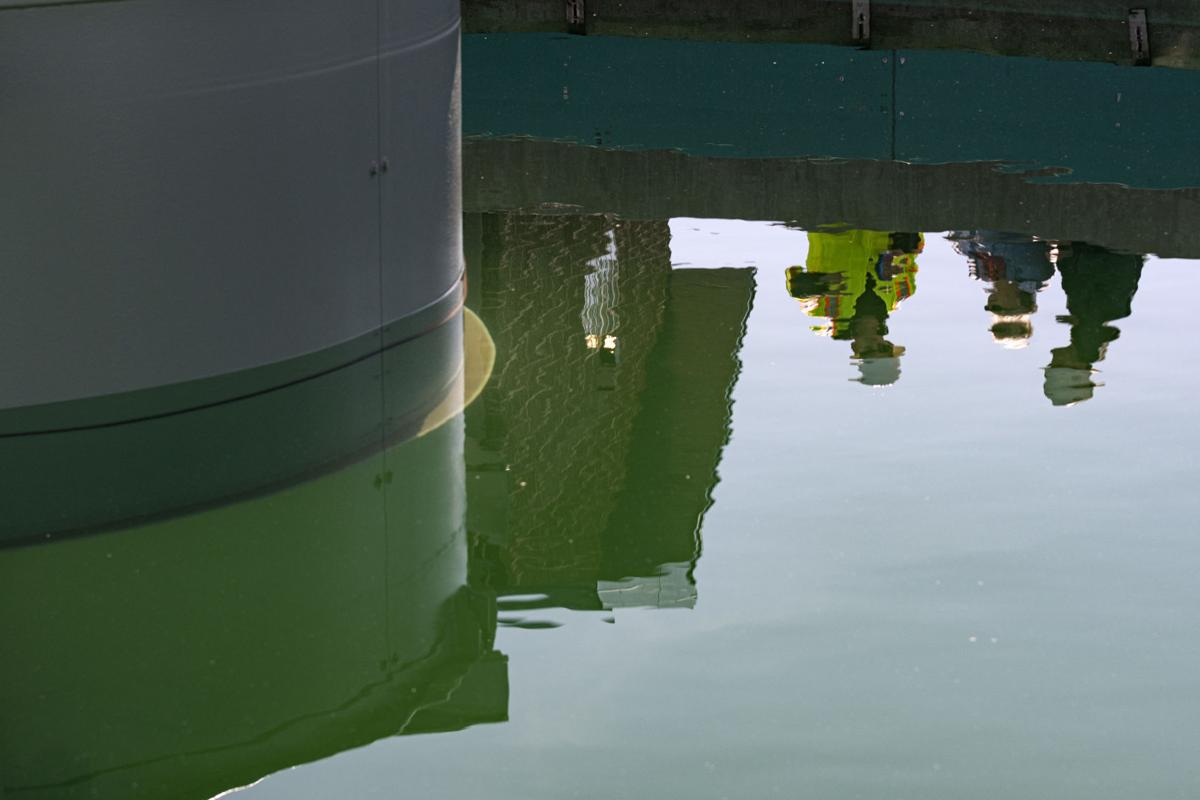 City officials, residents and construction crew members are reflected in the new clarifier during a tour of the wastewater treatment plant Wednesday in Heyburn. 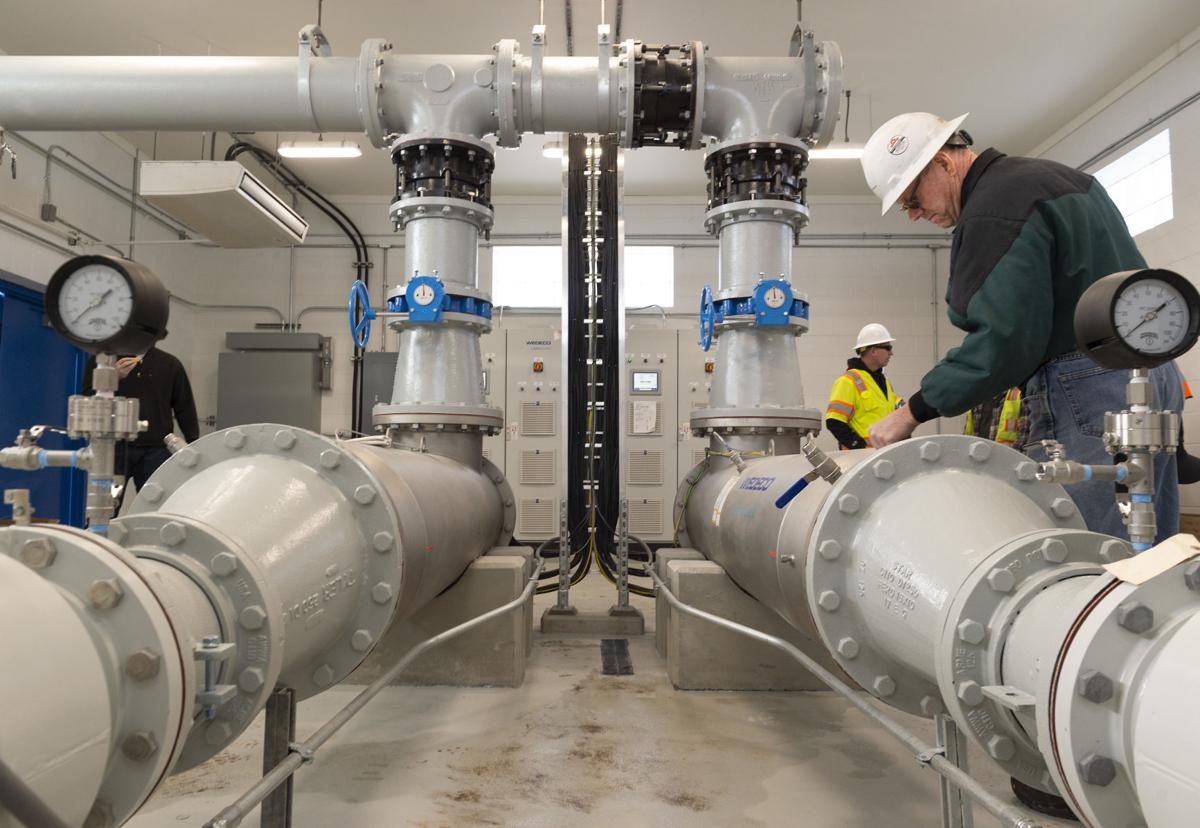 Community member Rodney Schmitt checks out equipment during a tour of the wastewater treatment plant Wednesday, March 10, 2021, in Heyburn.

Heyburn — The city’s first phase of wastewater treatment system upgrades are nearing completion and officials began running water through the ultraviolet disinfectant system and testing it on Wednesday while city officials toured the plant.

The city also held a luncheon to thank the contractors and city crews.

Other work completed in phase 1 includes installing a new clarifier and a screw press dewatering system.

“The new clarifier has more capacity than the two old ones together,” Heyburn City Administrator Tony Morley said.

The upgrades should see the city through another 40 years, he said.

The projects in phase 1 are expected to be completely online by mid-April.

“It’s a great feeling of success,” Morley said. “It puts Heyburn in a position where it can grow.”

“Heyburn is going to grow whether we want it to or not,” he said.

A $12.4 million bond for the work was approved through judicial confirmation in 2018 after the Environmental Protection Agency threatened to fine the city $55,000 a day for being out of compliance.

The costs for phase 1 and 2 are $9.6 million. City officials secured $3.1 million in grants shaving off the amount taxpayers will have to fund.

The city also used the same construction company for both phases, which saved the city about $800,000, Morley said.

After the new clarifier is up and running the two old clarifiers will be rehabbed, HDR Engineer Brad Bjerke said.

“That will give the city good redundancy,” he said.

The system’s clarifiers were a point of vulnerability but the upgrade to the plant’s solids drying process was what the city really needed to maintain compliance with the EPA, Bjerke said.

Previously, the solids were placed into bio-bags in pits, which needed to be stirred every day and had to sit for a year drying before it could be hauled to the landfill, Plant Operator Brian Vale said.

The new screw press, which will replace the old drying system, will really cut down on the hours needed to run that portion of waste treatment, he said.

The screw press will allow the city to process the solids immediately and take it to the landfill as needed, Morley said.

The second phase of the project will replace a lift station at R and 17th streets. The new lift station will be kitty-corner to the existing one.

“The lift station is over capacity and there’s no way to fix it,” Morley said.

Work on the lift station is slated to begin on Monday and expected to be completed by late summer or early fall.

“With phase 2 there are not as many moving parts,” he said.

Morley said after both phases are completed the city will keep improving its wastewater collection system, which will be a continual process as funds allow, he said.

A lot of the existing pipes are 40 years old and deteriorated, he said.

“I’m really excited to see it happen and have the redundancies in place,” Mayor Dick Galbraith said. “It’s a great place to be and I wish more citizens had a better understanding of what it means rather than just what they see on their utility bills.”

Grants to save Heyburn $3 million on wastewater fixes

Heyburn officials leveraged wastewater bond funds with grants to save taxpayers more than $3.1 million on a $9.6 million project.

HEYBURN — The city of Heyburn has filed a civil lawsuit seeking a judge’s approval to move forward with a bond to pay for $12.4 million in wor…

“I just love them because they taste freaking amazing."

City officials, residents and construction crew members are reflected in the new clarifier during a tour of the wastewater treatment plant Wednesday in Heyburn. 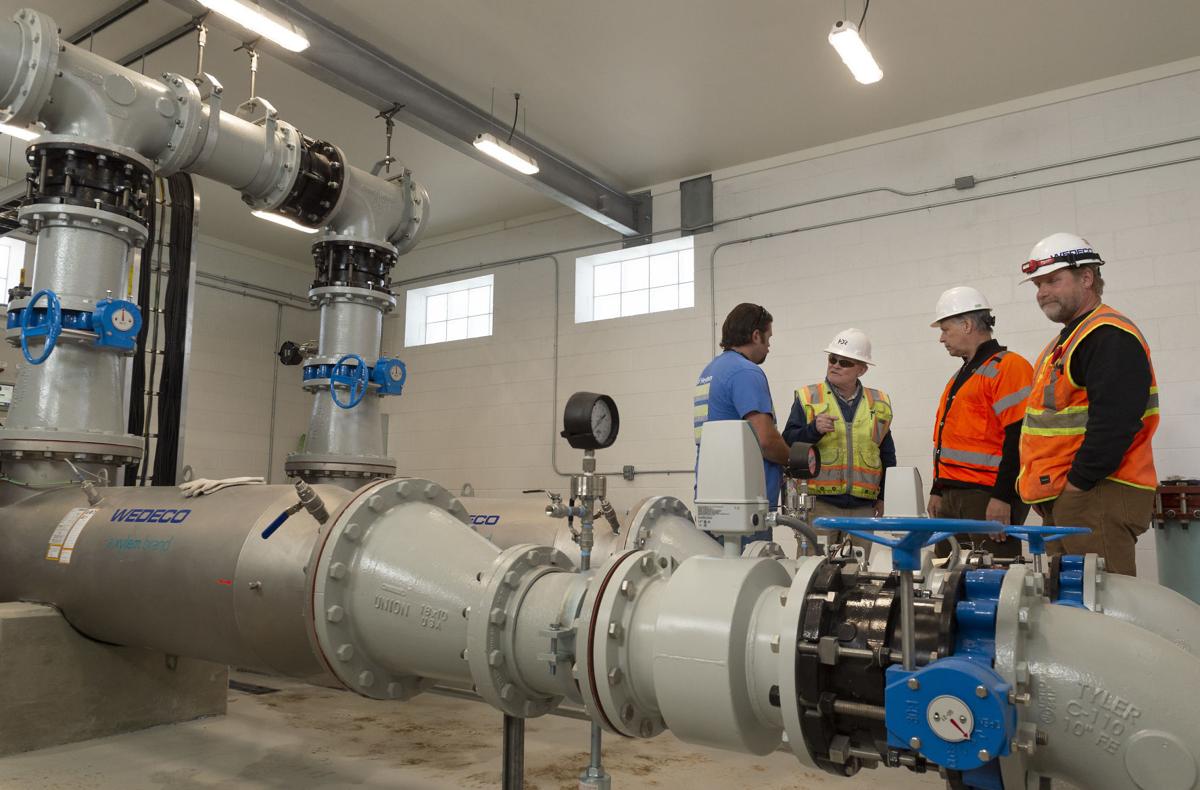 From left, Brian Vale, Mike Soucie, Brad Bjerke and Tillman Willis converse during a tour Wednesday at the wastewater treatment plant in Heyburn.

Community member Rodney Schmitt checks out equipment during a tour of the wastewater treatment plant Wednesday, March 10, 2021, in Heyburn.