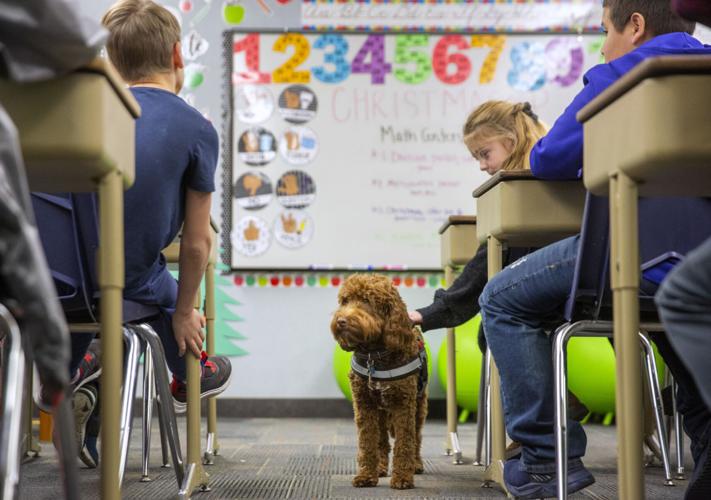 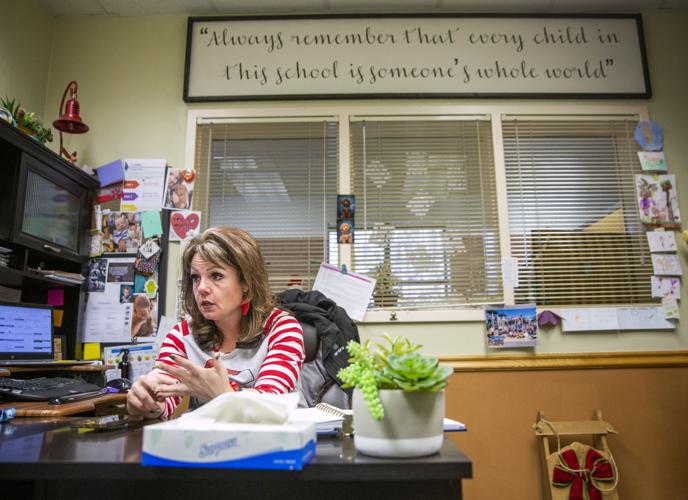 White Pine Elementary School Vice Principal Jacoby Sneddon talks about the impact her therapy dogs have had on the children Tuesday at the school in Burley. 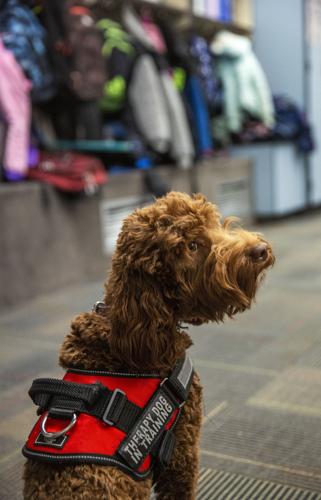 White Pine Elementary School, which teaches student from kindergarten to sixth grade, is finding multiple uses in classrooms and out for two resident therapy dogs.

Vice Principal Jacoby Sneddon’s background in special education and working as a probation agent helped her understand the connection between mental health and behavior.

“We have a lot of mental health needs in schools,” Sneddon said.

When she worked in the probation department, she began keeping a frog to help calm people. She still has the frog 15 years later in her school office’s fish tank, along with its goldfish companion, which she also uses as a calming influence in some circumstances.

Sneddon said she began thinking about starting a therapy dog program at the school after a state inspector mentioned it to her.

She extensively researched using therapy dogs in schools before she began the program with 10-month-old Selly, a reddish miniature goldendoodle, which is a cross between a golden retriever and a poodle and is hypoallergenic.

Selly has completed her obedience training and is waiting to test for her therapy certification.

Sneddon then added Whittie, a 4-month-old tan goldendoodle to the program. Whittie’s formal training will not start until she is 6 months old, but Sneddon has already been training her and she’s being socialized at the school.

Both of the dogs are regularly used in the classrooms and some teachers hand out Selly tickets to students for good behavior, which can be redeemed for a visit with the canines.

“They bring a fun atmosphere to the school and front office,” Secretary Kim Noble said. Once students enter the school foyer in the morning they can often be seen peering over the front desk counter trying to get a glimpse of the dogs.

Some parents have actually asked to have the dogs brought to them when their child is having a meltdown in the lobby, Noble said.

Special education teacher Mindy Meredith said she became aware of using therapy dogs at school when she taught at Burley Junior High School, which had some volunteer therapy dogs visit.

When the dogs are brought in to visit during reading, the students’ anxiety is visibly lowered, she said.

Students in the other classrooms also practice reading to the dogs.

“They are able to practice their reading without judgment,” Sneddon said.

“It’s really helpful for my students because they know they have to pay attention and continue to focus through a distraction,” Meredith said.

It brings the energy down in a room, which can help students with attention and hyperactivity disorders, she said.

All of the classrooms receive training before the dogs visit. The rules are that the students have to continue to focus on the subject and if a dog approaches them they can pet it, but they can’t call them or pick them up. The dogs are also taught not to lick. Outside of the classrooms when students encounter the dogs, they must ask first before petting them.

Sometimes a request is made to have a dog accompany one child in a classroom, as an emotional support dog, Sneddon said.

The other children are simply told the dog is working.

“It helps a lot when I’m feeling sad,” student Trinity Salazar said about the therapy dogs visiting her fourth-grade classroom.

Ashton Retzloff, also in the fourth grade, said he likes it when Selly visits his classroom and he’s working on earning a Selly ticket so he can spend extra time with her.

“I think the program is great because it is calming for the kids,” Tiffany Thompson, a fourth-grade teacher, said. The dogs visit her classroom about once a week.

“The students get so excited and it’s fun to have her in there. The students really enjoy it and they know it’s a privilege,” she said.

Using therapy dogs in schools is becoming more common, Sneddon said, and there is a lot of research to back up their use.

Good socialization and training is paramount to the success of a program.

The dogs are also brought in during staff meetings and the teachers enjoy the interactions, Sneddon said.

“The parents have been super supportive,” she said. “And in all honestly, I didn’t know how much the dogs would help me professionally. When I have an upset parent come in the dogs have the same calming effect on them.”

New to Rupert: A musical Christmas

“It is certainly new to Rupert. It takes incredibly talented people to pull it off and it has got to be a labor of love.”

A sagging ceiling over the Howells Opera House’s audience section has forced Oakley Valley Arts Council to temporarily close the theater and begin raising funds for its repair.

A Crystal start to 2022: Rupert's giant sugar beet set to bring in the New Year

New Year’s Eve revelers will gather for the third year on the Rupert Square for a party to watch a giant lighted sugar beet — named Crystal — descend from the sky.

Senior judges are playing a greater role in keeping justice moving along while saving litigants, attorneys and counties time and money.

A Heyburn man is charged with raping an 11-year-old girl.

A Paul man is charged with several child sex charges after police said he abused two children, ages 6 and 8.

When the COVID-19 pandemic forced the closure of a roofing sales and insurance office, two Mini-Cassia men turned the loss into opportunity and launched their own business. Now a celebrity is talking about them.

A Burley entrepreneur is combining a thriving e-commerce business with a brick and mortar store that markets directly to customers online twice daily via live sales.

White Pine Elementary School Vice Principal Jacoby Sneddon talks about the impact her therapy dogs have had on the children Tuesday at the school in Burley. 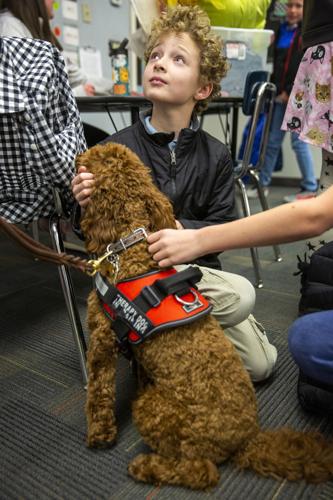