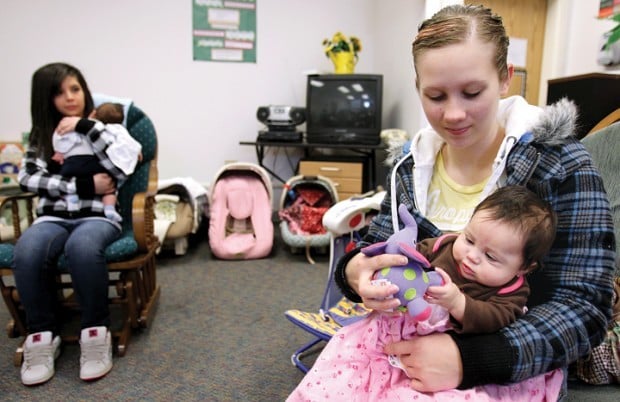 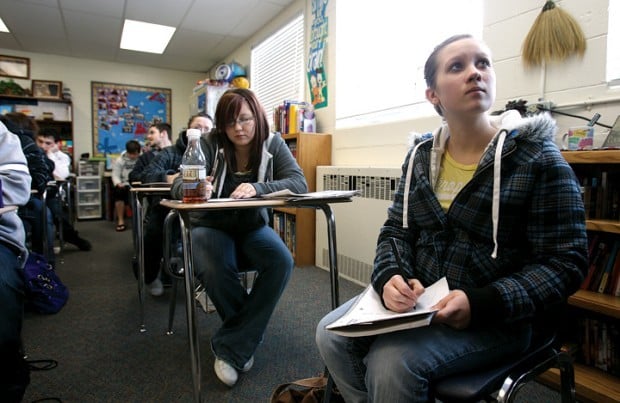 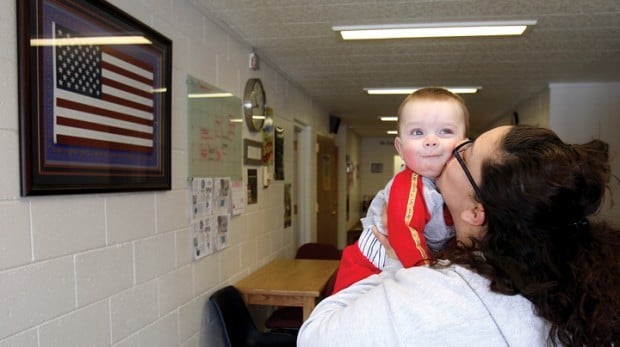 Kristen Rodriguez kisses her son, Jaysun, Monday in the hallway of the Cassia Alternative High School in Burley. In 2009, south-central Idaho led the state in teen pregnancy rate, a measure of how many teen girls per 1,000 become pregnant. (ASHLEY SMITH/Times-News) 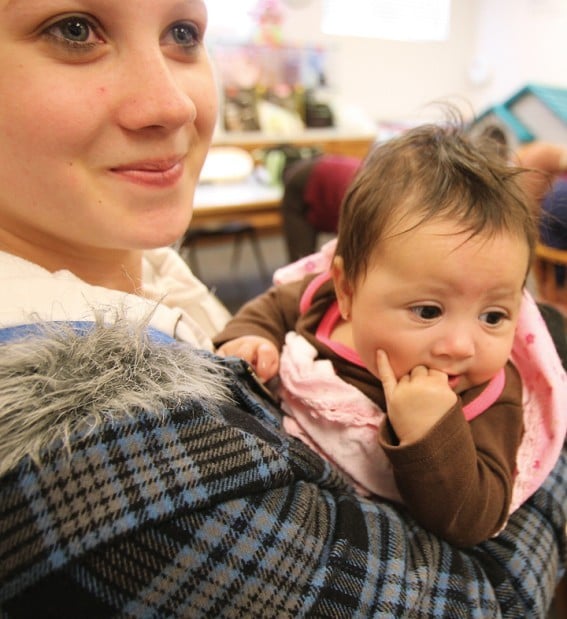 BURLEY — While most teens ponder who to ask to the prom or whether to take trigonometry next semester, Kiyana Villalvazo’s thoughts center on a tiny girl with delicate feet.

Every two weeks, Villalvazo brings her 4-month-old daughter, Jesenia, to Salt Lake City for medical treatment on the infant’s legs, which curled as she grew inside her mother. Only 18 herself, Villalvazo has watched as casts and now metal braces help guide her daughter’s growth.

Villalvazo married her longtime sweetheart, Jose, at age 17, and moved in with his family. But her pregnancy early last year came as a surprise.

“We talked about having a baby, but we didn’t actually plan it,” she said. “Some kids plan to have their babies now, big time. I don’t know why — I just get this vibe that they want to be wanted and want to have a kid.”

But this much is certain: As Idaho’s teen pregnancy rate dropped from 1999-2009, south-central Idaho teens continued to get pregnant at much higher rates than their counterparts across the state.

In 2009, more than six of every 100 teen girls age 15-19 within the eight-county South Central Public Health District became pregnant. Idaho’s statewide teen pregnancy rate was closer to four of every 100 girls.

“I have never seen numbers like this before, and I’ve been working in this program on and off for the past 13 years,” she said.

“Once they drop out, they can drop off the radar,” said Lauri Heward, principal of Cassia Alternative High School in Burley, which Villalvazo attends.

“I think it’s alarming and a sign of the times,” Anderson said. “And I have to tell you, I don’t particularly like the times.”

Teens make mistakes. They always have and still do, 18-year-old Josh Dring said.

Dring, himself a father of a nearly 2-year-old daughter, doesn’t sugarcoat the reality that some teens live in the mainly rural Magic Valley.

“Everybody just goes to parties in Burley,” he said. “They get drunk and messed up and can’t control themselves.”

Dring said his girlfriend dropped out of school and got her high school equivalency degree after they had their child. The couple plans to marry in May. What’s not planned, he said, are most teen pregnancies.

He said schools do a good job in preaching abstinence and other sex education, but those messages don’t always sink in.

“It’s just how teenagers are,” he said. “They don’t know what to expect and they don’t really care what happens. They just go for it. And we just basically go in blind.”

Anderson said some teen parents treat their children as show-and-tell features, swelled by a mix of pride and a lack of maturity.

“It’s a pretty cool thing to bring your child to school,” he said. “Of course, we never let them.”

While more teens are comfortable talking about pregnancy, that hasn’t necessarily extended to their parents, Burley Junior High School sex education teacher Janet Bingham said. As more pre-teens experiment with physical relationships, she said, parents are still slow to realize how early they should start having those uncomfortable discussions about sex.

“Parents don’t do an adequate job,” she said. “They think their kids are too young to know about sexual things.”

It’s not that parents don’t care, Masoner said — quite the opposite. But work pressures can keep them distant from their children’s bombardment of sexual messages through unsupervised access to popular media.

“In most families it’s a big concern, but parents just don’t have the tools or the comfort level to talk to their kids about this,” she said. “It’s not part of the everyday conversation in their homes.”

For a number of Magic Valley teens, a heavy emphasis on family and traditional religious beliefs against contraception and abortion may play into both why they get pregnant and why they don’t.

But cultural factors are only one part of the story. Anderson said socio-economic factors play a larger role than any other factor.

The cost of responsibility

Villalvazo wants to become a nurse, and her husband wants to graduate high school with her.

But when Jose was laid off from his job, not even the help of family could keep pace with the needs of a young couple with an infant to care for.

“If you pretty much don’t have all the support and help you need for money and food and all that stuff, it’s hard,” Villalvazo said. “But we got on Health and Welfare and food stamps, and that helps out a lot.”

“Really, it’s a huge hit to the taxpayers,” she said. “Despite the emotional issues — and there’s so many of them — it’s a financial issue for our country.”

As state legislators eye a Medicaid overhaul that would cut $39.1 million in state spending next fiscal year by reducing funding for some services, the debate over the cost of teen pregnancies continues.

Educators are doing their share, Kontos said. Without school day cares like those provided at his school and Cassia Alternative, more teens would drop out to care for their children, increasing their reliance on state-funded social programs.

“You can’t leave the baby without assistance,” Kontos said. “It’s a struggle for these girls, but at least if they graduate there is a hope they can go on.”

There’s another side to that coin, both Masoner and Heward said, as not all teens are motivated to maintain self-reliance. Masoner said some teens take the approach that they won’t have to pay for their child’s care, instead shifting it to their parents or public care. Heward suggested that teen mothers should be required to stay in school to receive state assistance.

“If we put that standard back in place, it would help keep some of those kids in school,” Heward said. “Not to discredit the GED program, because for some kids it’s a saving thing, but a diploma should mean something.”

She’s not alone in her call for some teen mothers to shoulder a heavier burden.

“Somewhere we’ve got to get tough. What are the real consequences?” Bingham said.

But while some area educators are calling to give the issue the stick, they also realize that education can serve as the carrot that leads teen mothers out of cycles of poverty. Placing a higher emphasis on finishing high school and receiving post-secondary education can help improve the prospects of teens who grow up in struggling agricultural areas, Kontos said.

“I want to graduate,” Villalvazo said. “I know a lot of people who dropped out of school. They had too much stress, and they think they’ll just blow it off and come back and get their GED.”

Life together, yet alone

But she’s had to get used to life without Jaysun’s father. Her boyfriend of three years left the state after she became pregnant.

Heward said the burden of caring for a baby too often falls solely on the mother’s shoulders, and few teen parents remain together by the time they are seniors in high school.

For Dring, caring for a son, maintaining a relationship with his girlfriend and pursuing a music career have strained each pursuit.

“We were just like regular teenagers, trying to figure out how to get through life and how to do things,” he said of life before the baby. “I still get to go out and have a life and play in my band. She can go do things, but just chooses not to.”

But educators and teens alike know that not everyone shares Dring’s intentions of parenthood. Bingham said a lot of teen girls want unconditional love and think a baby will provide it.

“What they don’t understand is they’re the ones who will have to do the unconditional loving.”

Rodriguez is doing just that while working to finish high school this year. She hopes to move to Twin Falls and attend cosmetology school after she graduates, but it hasn’t been easy.

“It’s not all fun and games. You see the other kids with their babies and you’re like ‘Oh, that’s so cute,’ but once you have your baby, wow, it’s not all what it seems,” she said. “…When you get behind the walls and get home, the baby’s into everything, and you’re trying to do your work, trying to go to school and get everything done. It’s a lot harder than it looks.”

Laurie Welch may be reached at lwelch@magicvalley.com or 677-5025.

TWIN FALLS • You might not like it, but a group of national health experts say it’s high time your 10-year-old had a talk about sex.

Read more about teen pregnancy by county in Magic Valley

Find out about teen pregnancy resources

Kristen Rodriguez kisses her son, Jaysun, Monday in the hallway of the Cassia Alternative High School in Burley. In 2009, south-central Idaho led the state in teen pregnancy rate, a measure of how many teen girls per 1,000 become pregnant. (ASHLEY SMITH/Times-News)