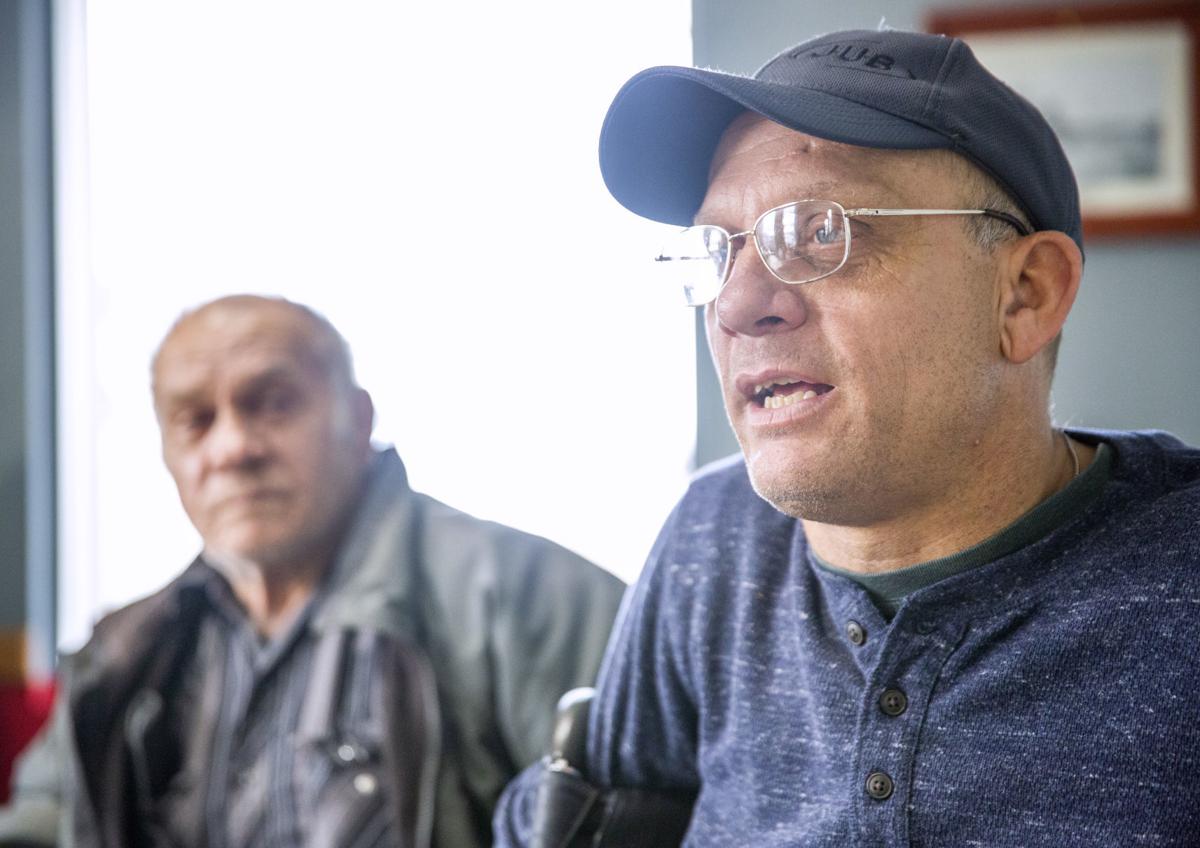 With his father, former Mayor Jim Pruett, sitting behind him, Mayor Chris Pruett talks about the changes he's seen in the city over the course of his life Jan. 31 at Ziggy's in Bliss. The town's name comes from the Bliss family, who settled at the nearby river bottom in the late 1800s. 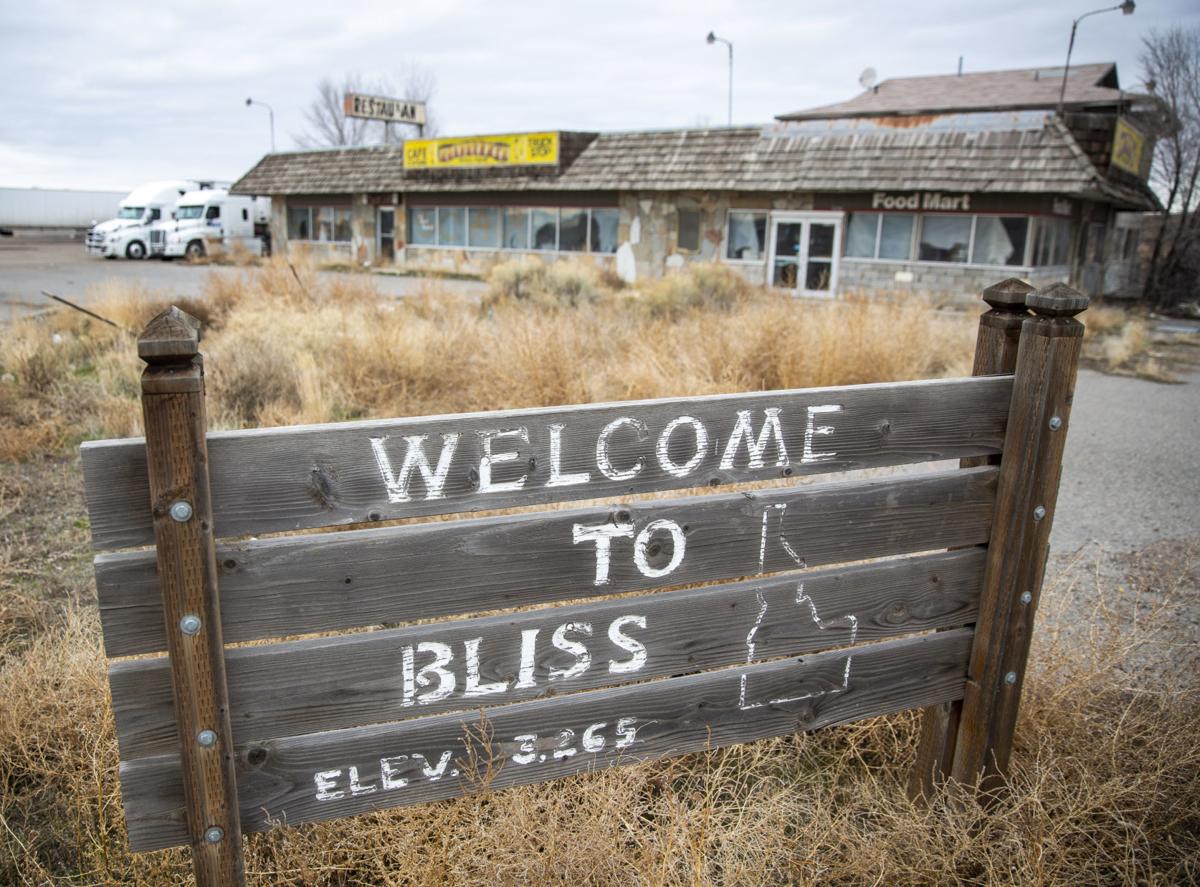 A sign welcoming travelers to the town sits Jan. 31 in front of an abandoned building that will soon be demolished and turned into a truck stop. The truck stop will employ about 70 people — Bliss' population is in the 300s. 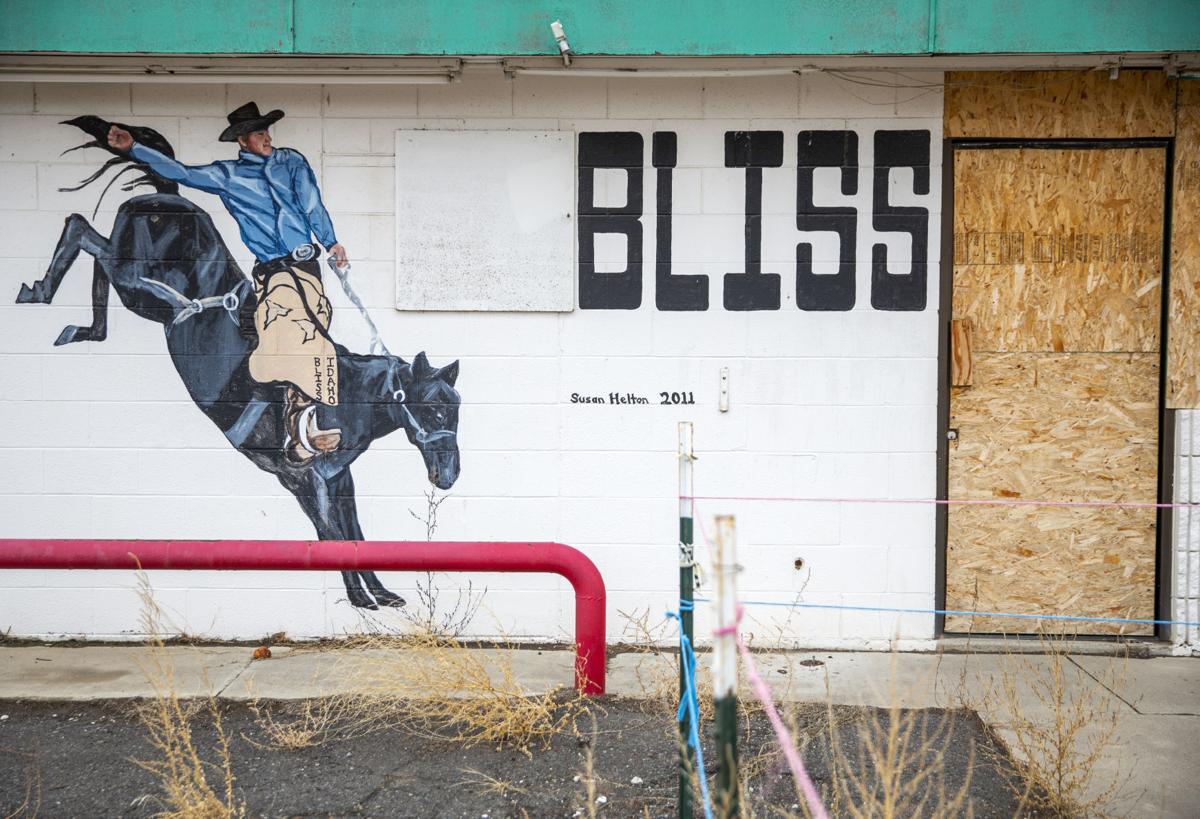 A building sits abandoned and boarded-up Jan. 31 in Bliss. A new truck stop across the street from Ziggy's will soon be the biggest investment the town has ever seen.

BLISS — The Roadrunner Cafe sits in a nearly empty parking lot. The concrete in front of its door has been overtaken by tough brown weeds, and someone has tagged its windows with orange graffiti. A battered, 30-foot-tall sign that’s lost its C now reads AFE and helped visitors spot the restaurant from the highway back when it was open.

This is the gateway to Bliss.

The abandoned lot and cafe at the entrance to town is a dilapidated reminder of Bliss’ busier past. The spot is also about to become a major part of the town’s future.

Love’s Travel Stops and Country Stores told the Times-News that later this year or early in 2021, these 19 acres will soon be home to a massive new truck stop.

The facility will include 116 truck spaces, 70 car spaces, a McDonald’s and a Subway. Construction will begin this spring and will likely cost $10 to $15 million.

During the last census, Bliss had 318 residents, up from 275 in 2000. Pruett said that number’s a lot closer to 400 now. Even with that growth, the truck stop and its roughly 70 employees will be a big change for the small community.

“I don’t know that we have 70 people working in town now,” Pruett said. “It’ll be good for the economy, but we’re going to have some growing pains.”

Traffic has been Bliss’ lifeblood for over a century, first with the railroad, then with U.S. Highway 30 and now with Interstate 84. The place has always relied on being a pit stop.

Not many people know where they are when they stop by Ziggy’s, the restaurant and convenience store across from the old Roadrunner.

“Usually when they come in they say, ‘What’s the name of this town?’” Ziggy’s co-owner Steve Goolsby said. “I say, ‘Bliss. Didn’t you feel it when you got out of your car?’”

Bliss has never been a big town. But it was bigger when more traffic passed through.

Goolsby and Pruett have lived in Bliss most of their lives. Pruett said that before 1975, the city had nine gas stations and six restaurants.

Everyone traveling from Burley to Boise knew Bliss.

Interstate 84, which loops around town, diverted traffic that used to stop in Bliss on U.S. 30. According to a 1982 Times-News story, the number of vehicles passing through Bliss went from more than 5,000 a day before the freeway to 1,400 after.

Goolsby lived in Bliss in 1975 and managed the Oxbow Diner and Stinker store. He said he’s the only businessman from those days who’s still around. The interstate changed everything, he said, and forced everyone to adjust.

“Prior to that, anybody could throw up a shingle and make it work,” he said. “It was pretty easy.”

These days, Bliss still relies on the freeway, but things are slow. Pruett described the town as a bedroom community. Most people leave Bliss behind every day when they go to work.

Bliss is experiencing many of the same struggles felt by small towns throughout America. Pruett said poverty is high — the U.S. Census Bureau estimates 18% of people in Bliss live below the poverty level — and the economy is slow.

There hasn’t been a new house built in town in a decade.

“We don’t even have a laundromat at this point,” Pruett said.

All you need is Love’s?Both Pruett and Goolsby said the truck stop will give Bliss a boost. As the new biggest business in the town’s history, it’s likely there will be a significant financial impact.

“The tax revenue that will be collected there will be good for the community,” said Connie Stopher, executive director of Southern Idaho Economic Development. “The new jobs will be huge for the community.”

The adjustment won’t be easy though. Housing could be an issue — there are virtually no vacancies. It’s also unclear where the employees at the truck stop will come from, with Bliss’ unemployment in the low single digits.

“I can’t find a kid to rake my yard,” Pruett said.

Goolsby knows that Ziggy’s will soon have much more competition. He still thinks the truck stop will be a positive.

“I’m optimistic that it’ll be good for our business,” he said. “But I don’t know that. I’m sure we’ll have to adjust again.”

“I think Bliss is on the mend,” Goolsby said. “Things are looking up for this town.”

This story has been updated to include additional information from Love’s.

The URA owns a chunk of land along Rock Creek and could work with the city and county to improve the walking trail.

Downtown Twin Falls could gain an $8 million apartment complex, but there are a few potential hurdles.

No resolution yet for Murtaugh zoning debate

Murtaugh's complicated requests for area of impact changes and other ordinance amendments will have to wait to be resolved.

The Magic Valley Regional Airport set a new record for travelers in 2019.

With his father, former Mayor Jim Pruett, sitting behind him, Mayor Chris Pruett talks about the changes he's seen in the city over the course of his life Jan. 31 at Ziggy's in Bliss. The town's name comes from the Bliss family, who settled at the nearby river bottom in the late 1800s.

A sign welcoming travelers to the town sits Jan. 31 in front of an abandoned building that will soon be demolished and turned into a truck stop. The truck stop will employ about 70 people — Bliss' population is in the 300s.

A building sits abandoned and boarded-up Jan. 31 in Bliss. A new truck stop across the street from Ziggy's will soon be the biggest investment the town has ever seen.