Slightly more than half of U.S. adults (53%) support expanding Medicare benefits to include hearing, dental and vision care, according to a new NerdWallet survey. And 54% support the government working to negotiate lower prices for prescription drugs covered under Medicare plans.

The survey, commissioned by NerdWallet and conducted online by The Harris Poll, asked more than 2,000 U.S. adults what potential changes to Medicare they support.

The idea of negotiating lower prices for prescription drugs covered under Medicare garnered the most support of the options presented — and among the Medicare proposals now being floated in Congress, probably has the best chance of passing.

“There’s bipartisan interest in doing something about the cost of prescriptions for people on Medicare,” says Tricia Neuman, executive director of the Kaiser Family Foundation’s Program on Medicare Policy. “There are different views about how best to do that. But this is one area where it seems possible to envision bipartisan agreement on solutions that would do a lot to help people with high drug expenditures.”

After drug costs, interest in expanding Medicare coverage to include hearing, dental and vision care was a close second among the options presented in the survey (53%), and 71% of Americans ages 55 and over say they support this change. This is likely because Original Medicare currently covers none of these services.

“Almost everybody I talk to wants dental and what I call ‘eyewear coverage,’” says Katy Votava, president and founder of Goodcare, a consulting firm focused on the economics of Medicare.

Backing soft for 'Medicare for All'

Only about a third of Americans (35%) support creating a “Medicare for All” national health insurance system. Americans ages 35 to 44 are the friendliest to this proposal, with 51% saying they support it. 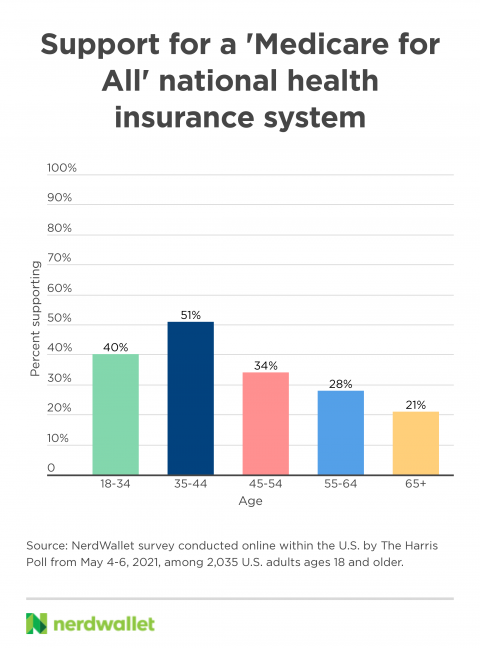 Support for this kind of proposal is uncertain. In the KFF’s most recent Health Tracking Poll that asked the question, 71% of respondents said they approved of a government-administered health plan. But a Pew Research Center poll from September 2020 found that when asked how the government should provide health insurance coverage, only 36% of respondents favored a single national government program.

Lower interest could be due to confusion about what a Medicare for All program might provide. That’s not surprising, since there have been several different proposals in Congress.

“A lot of people don’t understand exactly what Medicare for All would look like,” says Carolyn McClanahan, M.D., a certified financial planner and founder of Life Planning Partners in Jacksonville, Florida. “Some people have in their mind that it would be a government takeover of medicine.”

In addition to bills proposing various Medicare for All plans, more than 200 bills involving Medicare have been introduced in Congress since January. Among them is the reintroduced Medicare at 50 Act, which was first submitted in 2019 and would allow people ages 50 to 64 to buy into the Medicare program. In NerdWallet’s survey, only 31% of Americans support this potential change. Interestingly, all age groups under 65 are more likely to support this change than people 65 and older (34% ages 18 to 64 compared with 20% ages 65 and over).

“A lot of people are happy with their own health insurance,” Votava says. “So you’ve got a chunk of those people who are pretty satisfied with what they have and are afraid of change.”

It could also be that younger adults have had mixed experiences with Medicare as their parents have joined. “If they have a person they’ve been a caregiver for, it’s usually been a hassle or at least a learning curve,” Votava says.

“A lot of people are happy with their own health insurance. [Many] are pretty satisfied with what they have and are afraid of change.”

In April, 17 senators sent President Joe Biden a letter urging him to expand Medicare benefits to include hearing, dental and vision care, enact a cap on out-of-pocket expenses under Original Medicare, and negotiate lower drug prices as part of his proposed American Families Plan. And more than 80 House Democrats sent a letter a day later making the same points.

Despite the push — and despite campaign talk of lowering the Medicare eligibility age to 60 and creating a public health insurance option — Biden’s latest version of his spending plan includes none of the suggested expansions to Medicare.

“There is a large segment of the Democratic members of Congress who are interested in building on Medicare to improve coverage and affordability for people in this age group,” Neuman says. “These ideas are popular because they build on a very popular program. But their popularity with the public doesn’t necessarily translate into good prospects for enactment by Congress.”

This survey was conducted online within the United States by The Harris Poll on behalf of NerdWallet from May 4-6, 2021, among 2,035 U.S. adults ages 18 and older. This online survey is not based on a probability sample and therefore no estimate of theoretical sampling error can be calculated. For complete survey methodology, including weighting variables and subgroup sample sizes, please contact Brittany Benson at bbenson@nerdwallet.com.

5 mortgage trends to watch for the rest of 2021

Here are housing trends to watch for in the final months of the year. Also, check out more of the week's best money reads from the experts.

The road to successful investing may be more simple than you think.

Only 16% of Americans Know This Crucial Social Security Number

If you're missing this piece of Social Security information, you're doing yourself a major disservice.

Why inflation may not go away anytime soon

America's finance chiefs don't think inflation will go away overnight. Here's why. Plus, check out more of the week's best money tips from financial experts.

In some ways, the U.S. credit reporting system has improved. Credit freezes, which lock our credit information to deter identity theft, are now free and fast. We have free weekly…

Retirement Plan Balances Grew in 2020. Did Yours?

Despite the pandemic, many people made progress on the retirement savings front. But if you didn't, there's no reason to panic.

Including ETFs in your portfolio could make investing easier.

These small changes pack a big punch, and they only take a few minutes to do.

These simple steps could have a major impact on your retirement.

PennyWise Episode 23: Employee benefits and how to ask for more than the typical

Debunking some common myths about retirement

Debunking some common myths about retirement

Wedding season is here: What brides, grooms need to know when planning

Wedding season is here: What brides, grooms need to know when planning