Sheriff: At least 8 killed in plane collision at Idaho lake 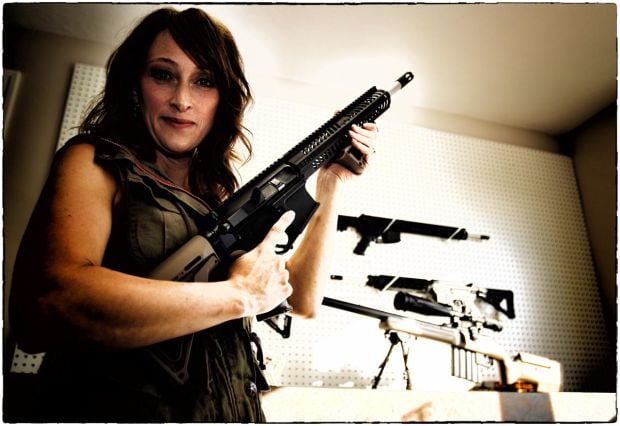 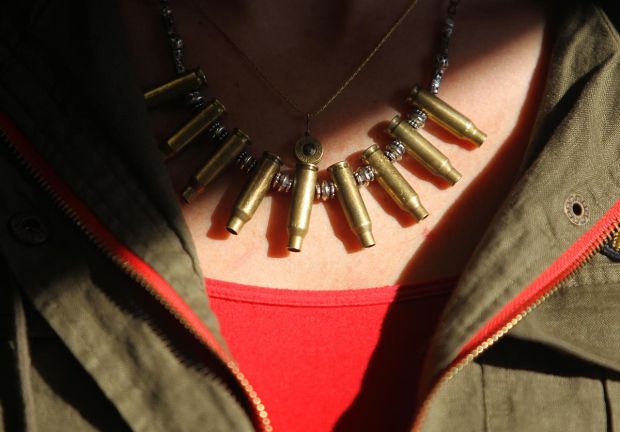 DREW NASH • TIMES-NEWS Director of Operations Kayla Cuellar wears a necklace made out of shell casings Wednesday, Oct. 2, 2013 at Valiant Firearms and Ammunition in Twin Falls. The store sells a number of varieties.

Mike and Kayla Cuellar have been running Valiant Firearms & Ammunition for more than five years, but until last week they only sold firearms as special orders for existing customers. Now they run “The Gun Room,” a portion of their shop dedicated to high-end, Idaho-made rifles and handguns.

“We’re not going to turn anyone away, but our focus is definitely on people who want to put money into a firearm that’s going to be a quality weapon they can use, whether it’s for sport, training for defensive, a what-if zombie (scenario) or whatever,” said Kayla Cuellar.

The factory in Twin Falls is one of the only gun stores in Idaho that manufactures ammo, sells weapons and offers advanced defensive firearms training under one roof, said Mike Cuellar.

Valiant supplies ammunition to retailers and law enforcement agencies throughout the northwest, including 15 police departments in southern Idaho. Branching out to individual sales is part of the Cuellar’s plan to diversify their business, an important characteristic in an industry where the market is determined by suppliers, politics and crime.

“Our next step is careful, calculated growth,” Kayla Cuellar said. “This is our biggest year ever. People buy in bulk and large quantity. We don’t like to have the big spikes in purchasing. We’d rather have a normal market where we can have steady growth.”

“We have product stocked in here that you will not find anywhere else in the Magic Valley, higher end gun parts,” he said. “Things that are just not readily available for people in the community. For example, if people want to buy a gas block for an AR-15, they’re going to have to get online and purchase, that’s the type of item I want here.”

Mike Cuellar likens his vision to Black Hills Ammunition, which he said focuses on smaller batches of quality product.

“They started in their garage with a hand press and have grown into something big, but they are nowhere as big as the big manufacturers that deal in quantity and cheap ammunition. I don’t want to go there. I much rather go the Black Hills route and stay relatively small and produce very high quality product because there’s a market for that.”

Although there is no law restricting the amount of ammo the Cuellar’s can sell, Mike Cuellar said, they have to be vigilant to protect themselves and their communities.

“There’s no law that says I have to, but I still feel a responsibility as a business owner and citizen to not just pass stuff on because it is a sale,” he said. “I’m playing close attention to customers, who they are and what they’re doing with (my products).”

There have been a handful of cases over the years that the couple said they had to deny customers ammunition.

“One individual came in and had ordered a large quantity of stuff,” he said. “Something didn’t feel right so I sent him on his way. Several weeks later there was a major issue with the gentleman and I got a call from a family member that asked us not to sell him anything.”

The new Gun Room will specialize in tactical rifles, parts, accessories and 1911 handguns manufactured by Intacto Arms in Boise.

While their firearms are intended for intermediate to advanced shooters, Valiant’s ammo and training courses run the gamut.

90% of Jackpot residents have been out of work since the COVID-19 restrictions, although some are now back at work with the limited reopening of casinos.

"The affected team member is receiving the necessary medical care and quarantining at home," the company said.

Chobani is launching a PB&J yogurt and is donating all proceeds from the product to a national food bank organization.

1 killed in industrial accident at Lamb Weston in Twin Falls

One person was killed in an industrial accident at Lamb Weston in Twin Falls Wednesday morning.

There may not be a second stimulus check, so take this step to avoid missing out on the first one

If you haven't gotten any stimulus money yet, it's time to act.

Coronavirus cash: 13 ways to tap your money if you need it

Be prepared in case you find yourself among the millions of unemployed due to the pandemic.

The COVID-19 pandemic as battered the Magic Valley aquaculture industry which relies heavily on restaurant sales.

Confirmed coronavirus cases are rising in 40 of 50 states

DREW NASH • TIMES-NEWS Director of Operations Kayla Cuellar wears a necklace made out of shell casings Wednesday, Oct. 2, 2013 at Valiant Firearms and Ammunition in Twin Falls. The store sells a number of varieties.