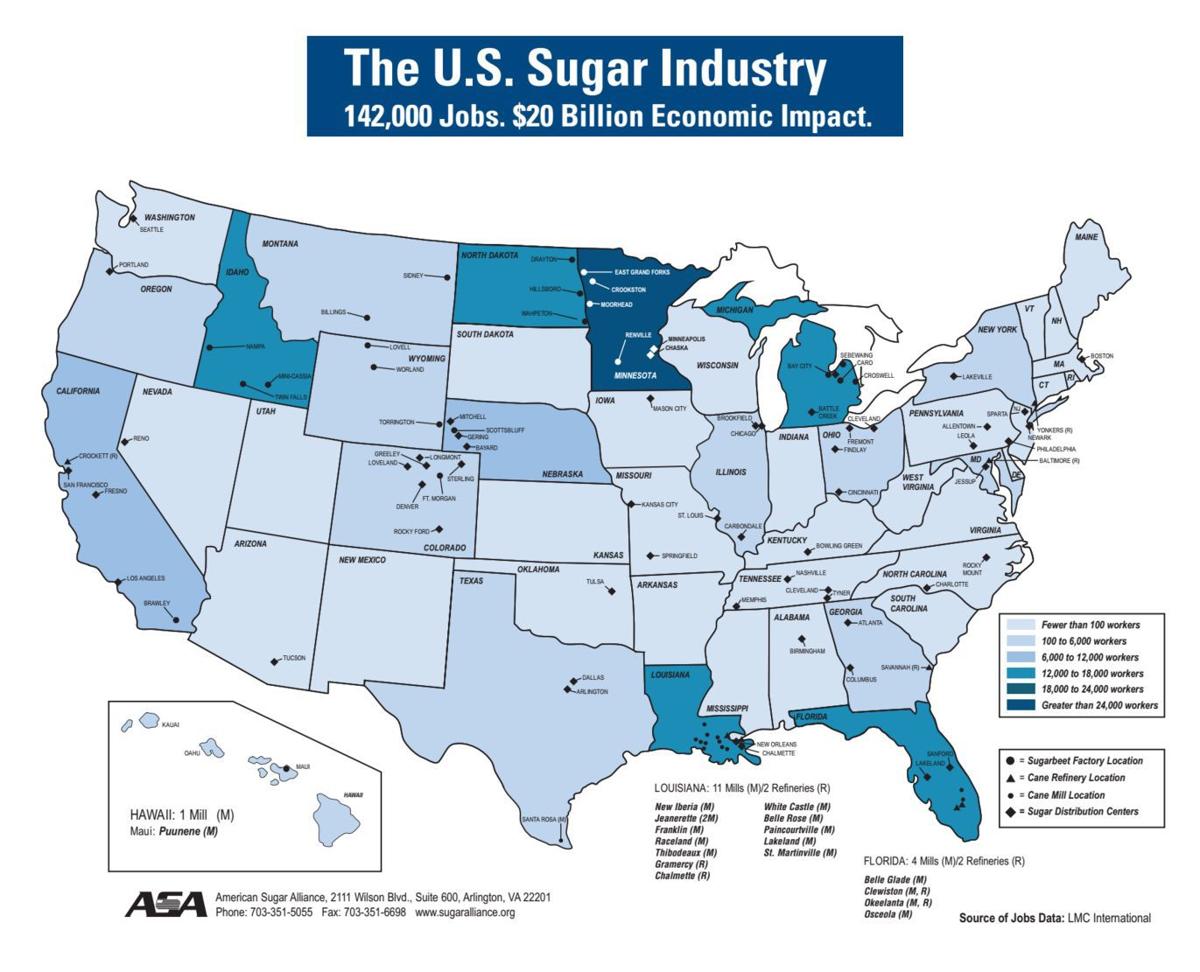 This American Sugar Alliance graphic shows in darker blue where sugar — beet sugar and cane sugar — is produced in the U.S. and the number of workers employed. The states in very light blue, such as Nevada and Oklahoma, have minimal sugar industries. 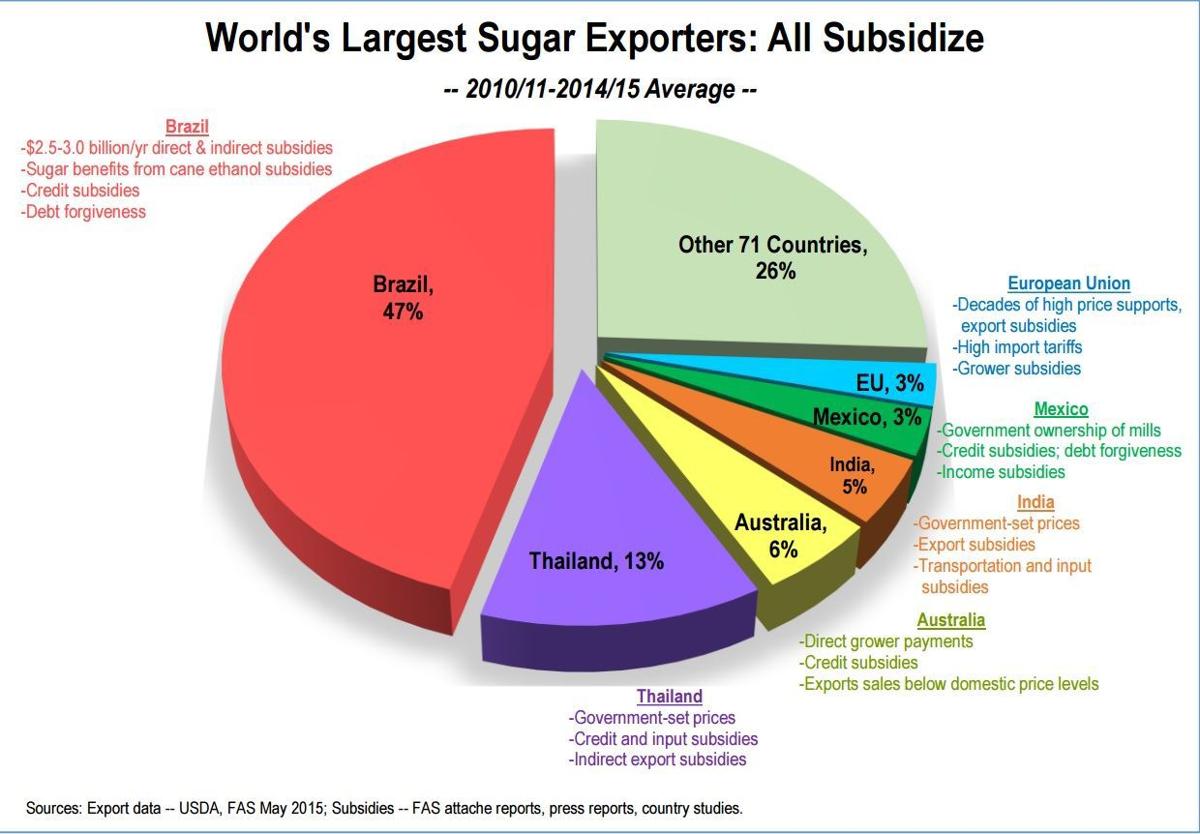 This chart, courtesy of the American Sugar Alliance, shows the world's largest sugar exporters and their pieces of the world market. 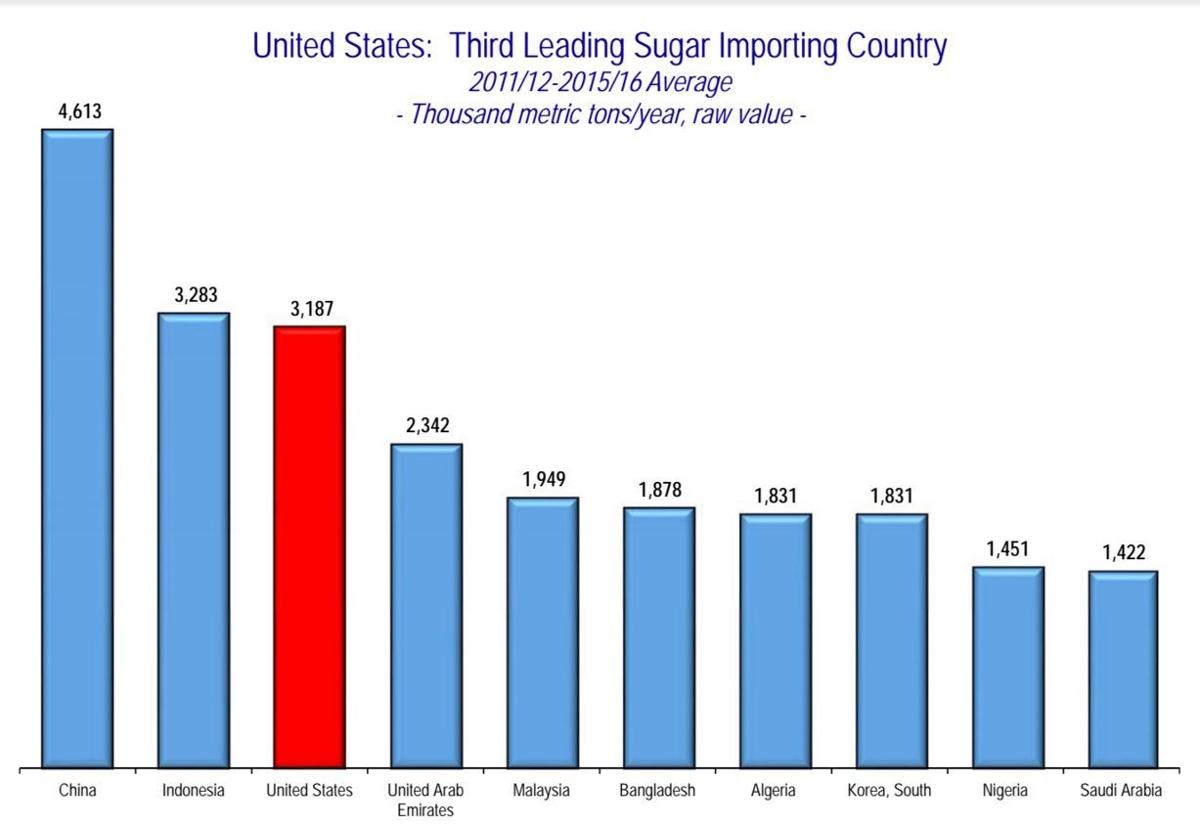 This graphic, courtesy of the American Sugar Alliance, shows the leading sugar-importing countries, with the U.S. in the No. 3 spot.

TWIN FALLS • If a farmer used the so-called “world price” for sugar to decide whether to grow sugar beets, that farmer would run, screaming, in the other direction.

That’s because the world price is barely half of what it costs to produce the commodity. Why, then, do U.S. farmers continue to grow sugar beets?

The answer is simple: The U.S. Department of Agriculture manages the amount of sugar produced nationally to protect the industry from outside influences. By adhering to World Trade Organization rules, the USDA ensures a stable and sustainable domestic sugar industry.

On a global level, sugar production — or overproduction — has become a political tool which has rendered the world price a meaningless indicator of actual prices to growers and throws the supply-and-demand marketing principle out the window, the American Sugar Alliance argues.

The alliance is a national coalition of cane and sugar beet producers.

The WTO, USDA included, has determined sugar to be an “essential” food stuff — too important to rely on imports — and has ruled its members should control their own supply by producing what they consume and no more than they consume. Upon this recommendation, U.S. sugar producers — sugar beet growers and cane growers alike — contribute 80 percent of the sugar the nation consumes.

Cane was once the dominant sugar in U.S. markets, but within the past few years beet sugar has taken the lead. Sugar from cane has to be processed twice, making it more expensive than beet sugar. So more cane producers are moving into the ethanol market.

Beet sugar now accounts for 55 percent of refined sugar produced in the country each year.

Although U.S. growers are capable of producing 100 percent of what the nation consumes, the U.S. sugar program, used since World War II, has kept sugar imports as an economic development tool with countries that are friendly toward the U.S., said Duane Grant, chairman of Snake River Sugar Co.’s board of directors. By continuing to import some sugar, the U.S. bolsters relationships with its trade partners.

Despite a legal obligation to comply with WTO rules, many of its members ignore regulations and subsidize their growers to produce massive amounts of sugar every year, Grant said, dumping their surplus onto the world market for whatever price it will bring.

Brazil is, by far, the largest sugar exporter on the globe, producing nearly half of all sugar exports. Brazil, along with Australia, Thailand, Mexico and India, created a world glut and since 2011 dropped the world sugar price from 32 cents per pound to 11 cents, according to the American Sugar Alliance.

Brazil’s sugar production, mainly from cane, is forecast to drop 950,000 tons this year to 35 million tons, one-fifth of the world’s production. Fifty-nine percent of Brazil’s sugar cane crop is now converted to ethanol instead of made into sugar, according to the USDA’s Foreign Agricultural Service.

Production in Russia, Australia and Mexico is expected to rise.

U.S. production is forecast at 8 million tons, up nearly 150,000 tons from last year, according to USDA statistics. Of that 8 million, Idaho produces 800,000 tons — nearly 10 percent of domestic sugar. Fifty-five percent of U.S.-produced sugar is from beets; 45 percent is from cane.

“Depending on other countries for a food staple was a recipe for disaster, which is why America created its sugar policy and encouraged domestic production,” an American Sugar Alliance video says of America’s foreign dependence and resulting sugar rationing in the 1940s. “Now, we have affordable, homegrown supplies.”

The U.S. consumes 10 million tons of sugar each year, importing 20 percent of that. The U.S. does not export sugar.

As the Times-News follows a year in the sugar beet cycle, you'll meet the people who irrigate the crop, haul the harvest, operate factory equipment and market the bags of finished White Satin sugar. The “Sugar Bowl” reporting team also will examine political, environmental and economic issues connected with the sugar beet industry.

MURTAUGH — By 8:30 a.m. on a Thursday in late August, sugar beet grower Ron Hepworth had finished moving water and was settled in for the day …

The sugar year: Beet harvest brings generations into the fields

TWIN FALLS — Eight months ago, Kirsten Burns had never ridden in a tractor-trailer. Let alone driving one of the longest, heaviest trucks on t…

This American Sugar Alliance graphic shows in darker blue where sugar — beet sugar and cane sugar — is produced in the U.S. and the number of workers employed. The states in very light blue, such as Nevada and Oklahoma, have minimal sugar industries.

This chart, courtesy of the American Sugar Alliance, shows the world's largest sugar exporters and their pieces of the world market.

This graphic, courtesy of the American Sugar Alliance, shows the leading sugar-importing countries, with the U.S. in the No. 3 spot.