BUHL — The water in the raceway shimmered with hundreds of wriggling gold and gray tilapia as Luis Carmona plunged his long-handled net into the swarm and scooped a few fish to dump into one of the tanks on the back of a delivery truck.

It looked like a normal day at First Ascent Fish Farm. But lately, some of the twice-a-week truckloads have been about half as full, lighter by about 1,000 pounds of live fish. The farm might have to start killing tilapia if sales don’t come back soon.

The last three months have rocked Magic Valley agriculture. Sectors like dairy and potatoes have struggled mightily as the pandemic forced restaurants — big buyers of cheese, butter and french fries — to close or scale back. Boosts in grocery store sales mostly haven’t made up for restaurant losses.

Aquaculture, which tends to be especially dependent on restaurants, saw a vast portion of its market disappear virtually overnight. Even fish farms like First Ascent, which sells live fish to Asian and Hispanic markets in Seattle, have seen large declines in revenues.

“Sales and markets have dropped off the face of the earth,” said Gary Fornshell, a University of Idaho Extension educator and aquaculture expert.

Magic Valley trout and caviar aren’t typically bought in grocery stores. Plus, even though many restaurants have been selling more take-out meals, take-out doesn’t tend to work as well for sit-down restaurants that sell high-end fish products.

Within Magic Valley aquaculture, the trout industry might be suffering the worst. An April survey by Virginia Tech and Ohio State University found that all responding trout farms lost money because of the pandemic and 86% either had already laid off staff or soon would. Thirty six percent of responding trout farms said if sales didn’t improve in three months they’d go out of business.

The pandemic could leave Magic Valley aquaculture with long-term scars.

Riverence and Clear Springs General Manager Jim Henderhan said his company lost half of its market in just one weekend in March. Riverence, which owns Clear Springs, produces about 75% of U.S. trout.

“This has probably been the toughest 10, 12 weeks now that I have ever gone through, professionally and personally,” Henderhan said. “It’s very trying what we experienced there with the loss of sales and overall impact.”

Riverence Farms in Buhl and Filer is the largest aquaculture business in the Magic Valley after acquiring Evaqua Farms a few years ago and Clear Springs Foods this winter. The company produces about 25 million pounds of trout a year. About half of that trout is sold through restaurants, Henderhan said.

In April, Riverence laid off 162 Magic Valley employees. With fewer buyers for trout, Henderhan said, the company has frozen a lot of processed fish, made donations to employees and the community and even stocked a small number of ponds.

A handful of independent trout farmers who sell fish to Riverence have been hurt, too.

“For some of the independents, selling any fish has been few and far between,” Fornshell said. “It’s been pretty devastating.”

The trout industry has been hammered by restaurant closures, but even Magic Valley fish farmers who don’t rely so heavily on restaurants have struggled.

First Ascent Fish Farms’ customers — markets in Seattle — have mostly stayed open, but there have still been negative impacts. Owner Don Campbell said during the height of the pandemic, his sales were down almost 50%.

“We kept going even though we were below cost and we weren’t making any money,” Campbell said.

Protests and riots in Seattle during the past few weeks have also had a strong, negative impact on sales, Campbell said. Some of the markets he sells to have boarded up their windows and customers stopped shopping.

Fish Breeders of Idaho in Hagerman grows sturgeon, tilapia, catfish and trout. That diversity can normally be a weakness, owner Leo Ray said, but it’s been a strength during the pandemic. Ray sells about a third of his fish to Whole Foods, a third to restaurants and a third to other grocery stores.

The restaurant third has essentially disappeared.

Even though Ray says he’s comparatively fortunate to have only lost a third of his business, it’s been a challenging three months. His staff has been scrambling, making phone call after phone call in an effort to find new buyers.

“You ever try to run a business without any money?” Ray said.

Campbell said if sales don’t improve soon, he’s going to have to make some difficult choices.

“Sometime in the next 30 to 45 days we’re going to have to decide whether we start killing fish,” he said. “We’re just not going to be able to grow them. It’s pretty heartbreaking to think about it.”

First Ascent wouldn’t be the only fish farm to stop raising new fish.

There are several reasons fish farms can’t just keep unsold fish in the raceways. For one, it doesn’t make financial sense to feed fish you’re not going to sell. Also, customers are used to buying a specific size of fish; they don’t tend to want abnormally large ones.

There are other biological limitations.

“We raise fish to the limit of the capacity of the oxygen in the water,” Ray said. “If you don’t harvest them, your inventory builds up higher than the oxygen level in the water will carry the fish. They either die, or you get them out of there or you quit feeding them.”

So farmers are, in many cases, putting their fish on maintenance diets, feeding them less or differently, to prevent them from growing.

And because some farms will stop adding new fish to their raceways, there’s likely to be a supply shortage a year from now.

Campbell said if the situation doesn’t get better, he’s going to have to stop raising new fish even though that would mean sometime next year he won’t have any to sell.

In the wake of the pandemic, the federal government has rolled out a host of new programs to help people and industries that have lost money because of COVID-19.

Aquaculture hasn’t gotten as much help as other agricultural sectors. And while the outlook has gotten better since Virginia Tech and Ohio State’s April survey, federal aid hasn’t come to aquaculture’s rescue yet, although there appear to be efforts underway to provide the industry with more assistance.

There are several reasons aquaculture has missed out on federal aid. One reason is that fish prices haven’t necessarily dropped enough — there’s a new pandemic-related assistance program that compensates farmers whose products have declined 5% in value between January and April.

“(The price) is not the issue,” Fornshell said. “Those fish could be free, they’re not going anywhere. The U.S. Department of Agriculture is using the wrong criteria for aquaculture; that’s making it more difficult for them to get aid.”

The federal government has also worked to buy products from farmers, then donate that food to people in need. Fish is highly perishable, so it’s hard to set up large-scale donations.

Even if restaurants across the country re-opened today and saw diners return in full force immediately, aquaculture would still have to wait a while before sales came back.

That’s because restaurants typically hang on to about two weeks of fish in cold storage, Ray said. They’re going to have to sell that fish first before they start buying again.

“Just now (the restaurants) are starting to really order,” Ray said, adding that if restaurants bounce back strong the industry should be OK, albeit heavily in debt.

Henderhan said he thinks the industry will recover, but these past few months have been so tumultuous it’s impossible to know. He hopes he can re-hire as many employees as possible, and soon.

“It’s very market-dependent of course,” he said. “I’m hoping, I’m very optimistic that it’s going to come back around.”

Restaurant closures have decimated demand for dairy, and that's forcing Magic Valley farmers to dump good milk. And there aren't many feasible ways farmers can donate milk instead of wasting it.

The Magic Valley saw a relatively modest increase in COVID-19 cases last week, but infections are skyrocketing in the Treasure Valley.

UPDATE: Idaho misses marks, will not advance from Stage 4

Too many Idahoans got sick from COVID-19 to move beyond the Stage 4 of reopening, Gov. Brad Little said Thursday.

Mosquitoes might seem like they're not a big deal. But they can spread West Nile. So the experts are bringing in a powerful tool: bluegill fish. 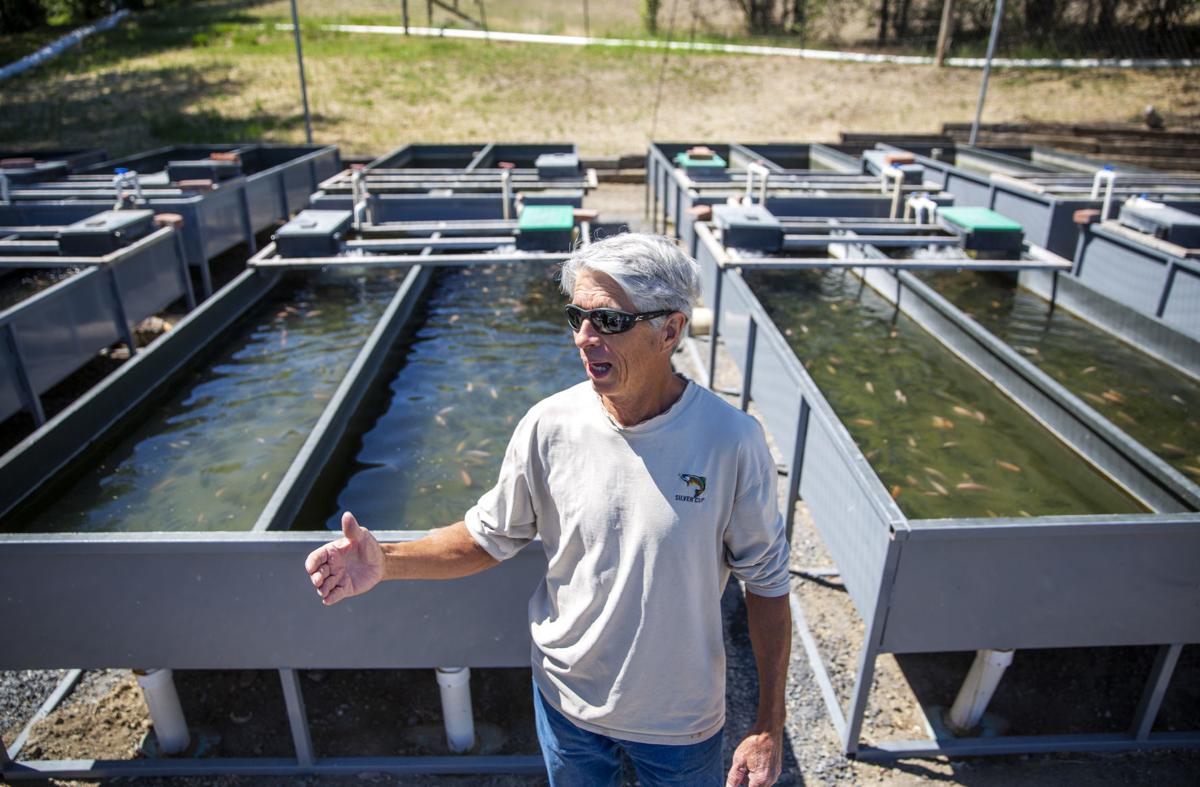 Owner Don Capmbell talks about the challenges of the aquaculture industry Thursday, June 18, 2020, at First Ascent Fish Farm in Buhl. 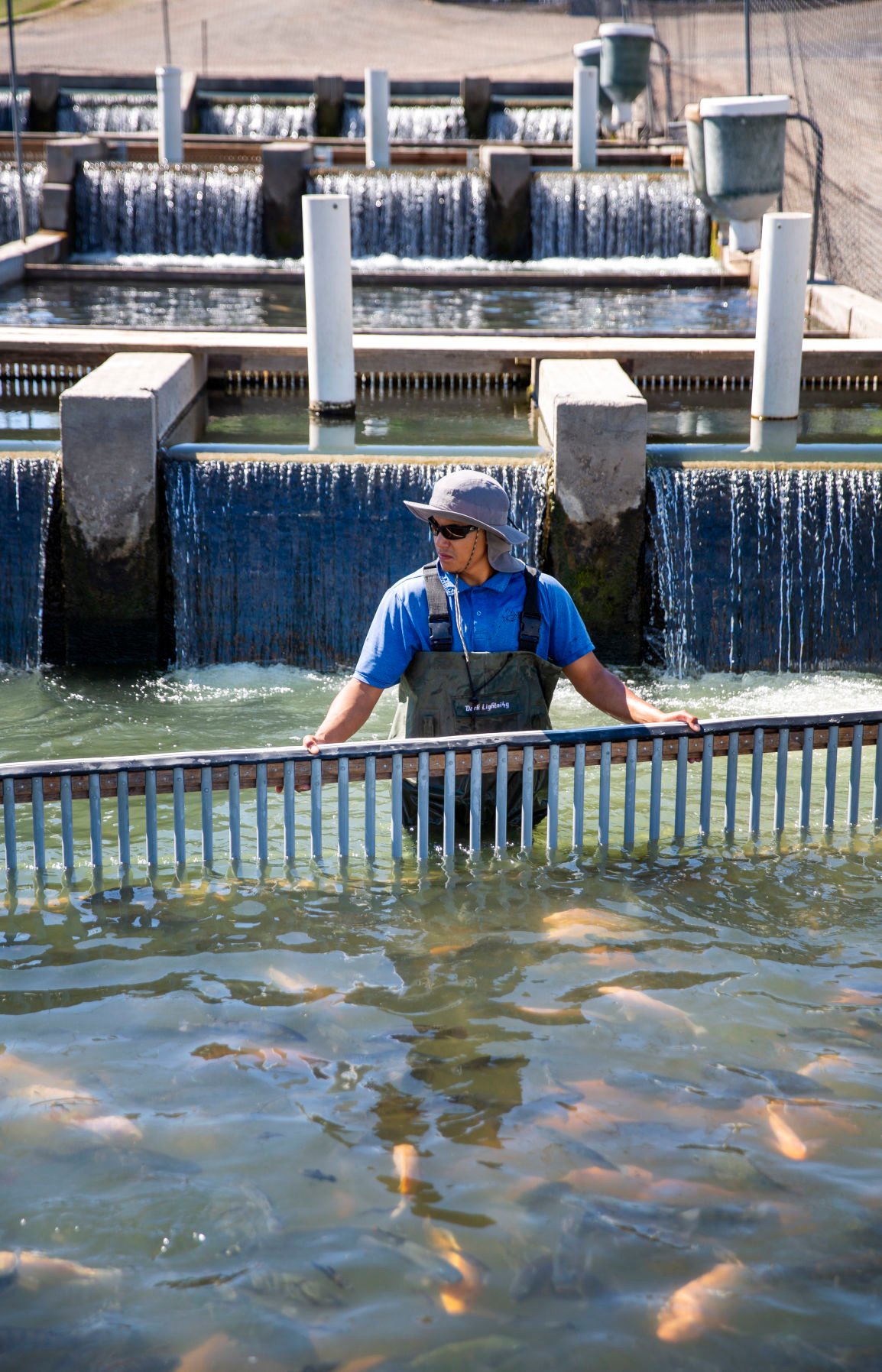 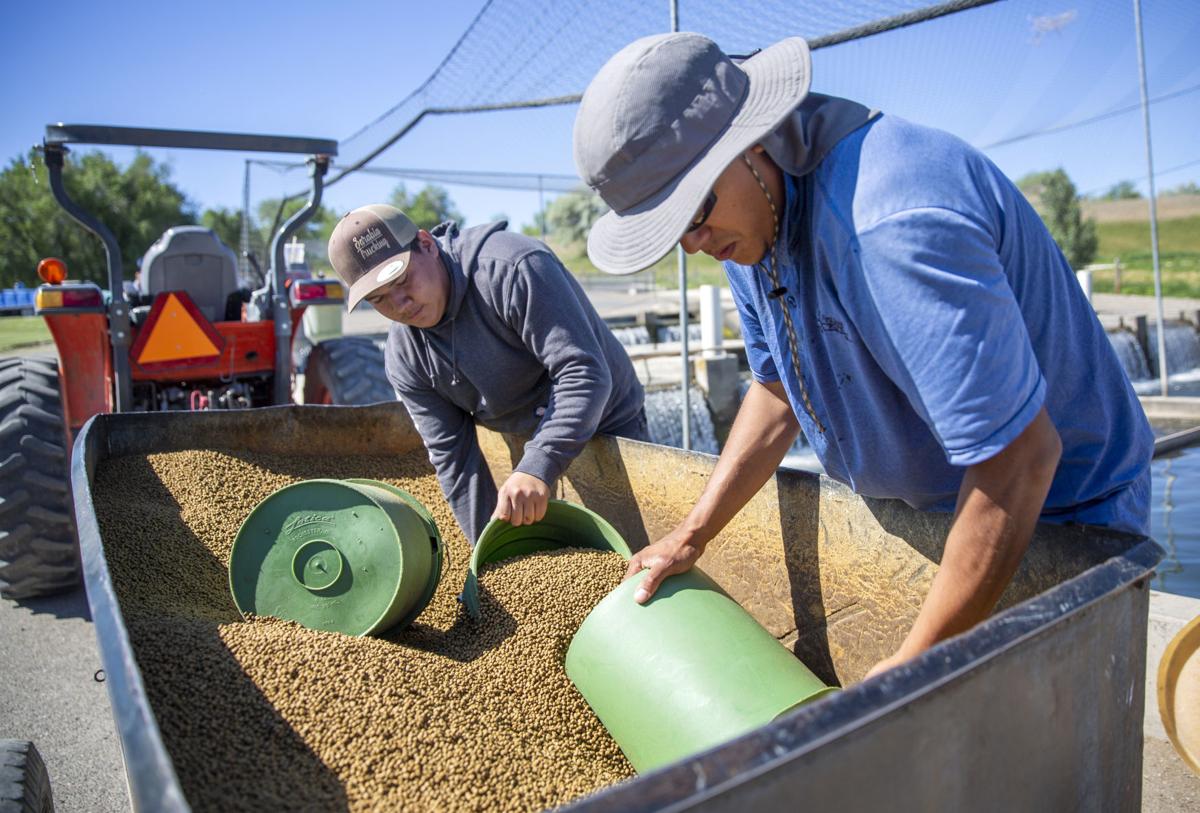 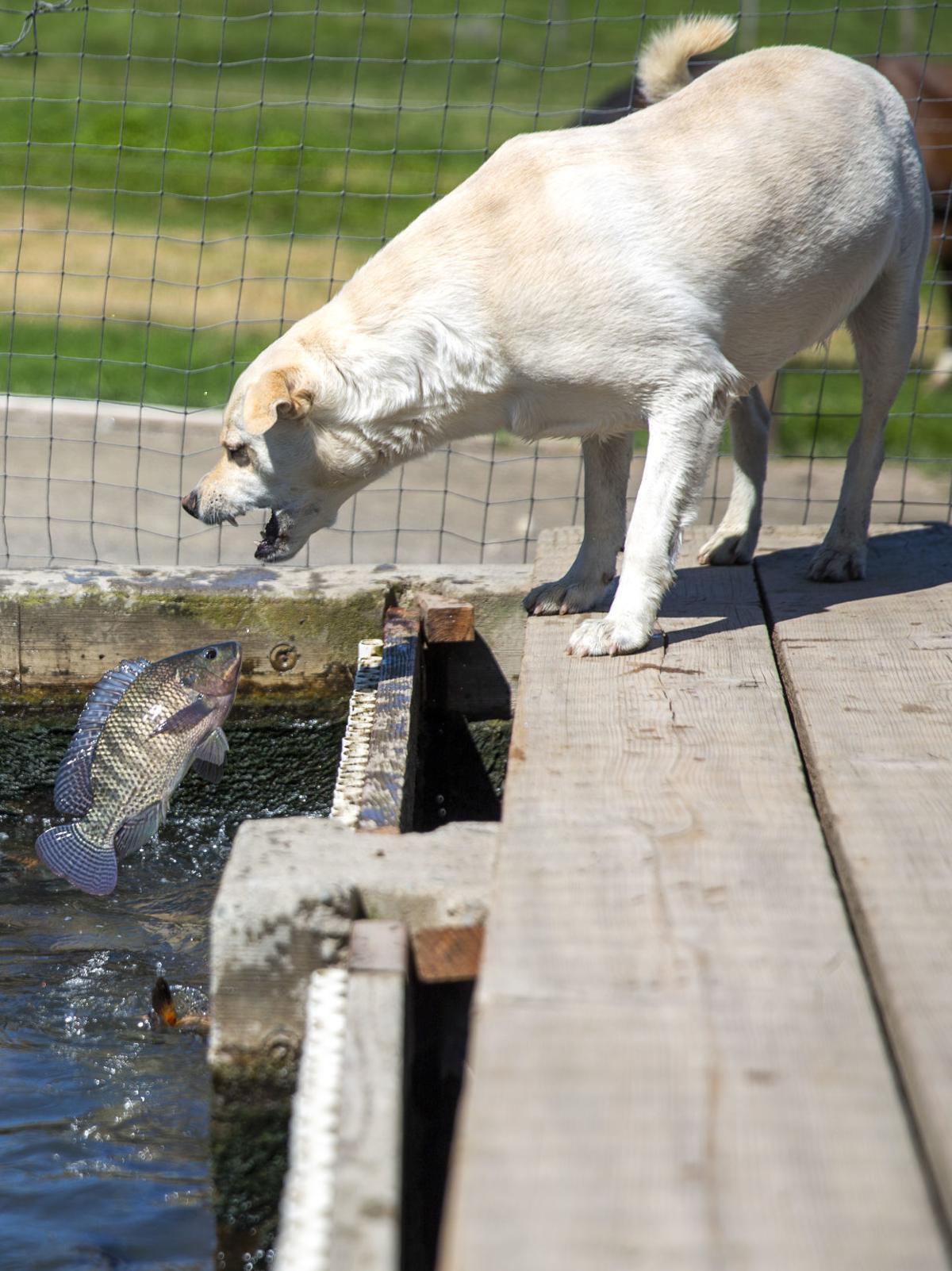 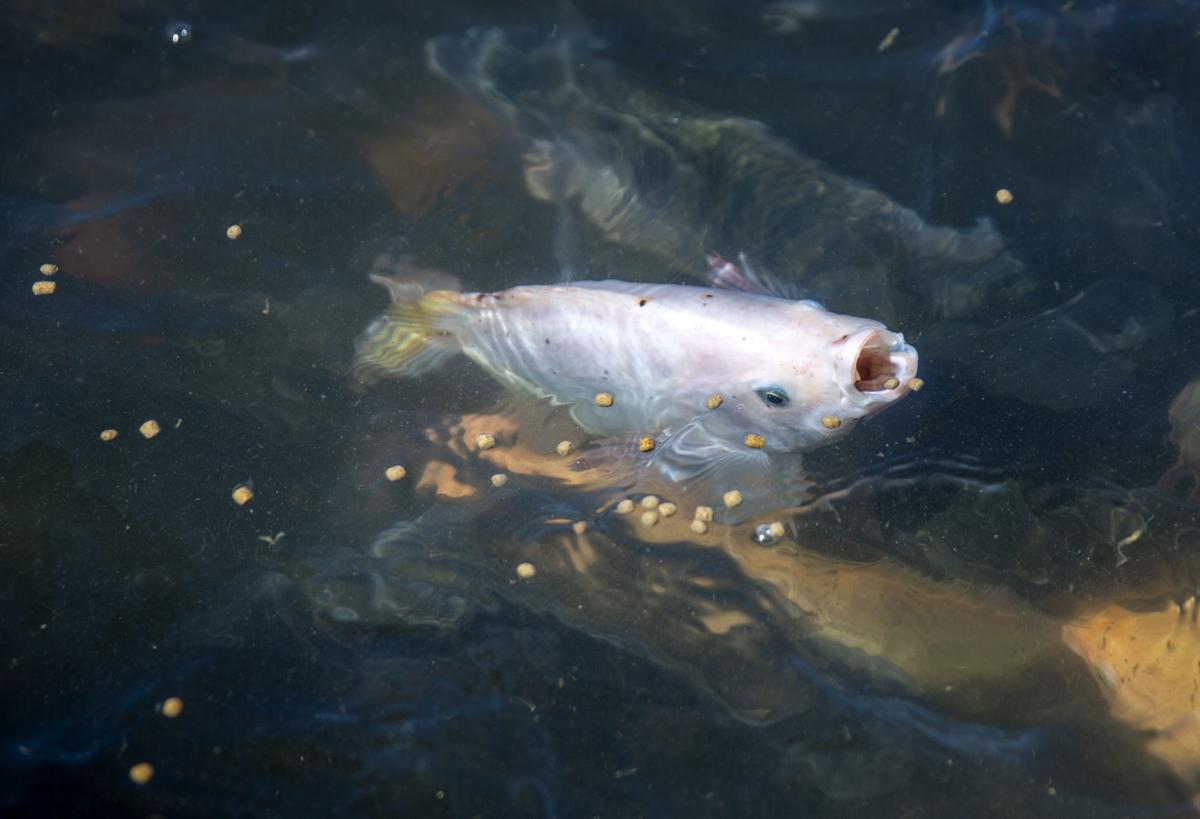 A tilapia surfaces to grab some food Thursday, June 18, 2020, at First Ascent Fish Farm in Buhl.