In this March 10, 2021, file photo, a woman strolls along the beach under rain clouds in Seal Beach, Calif. 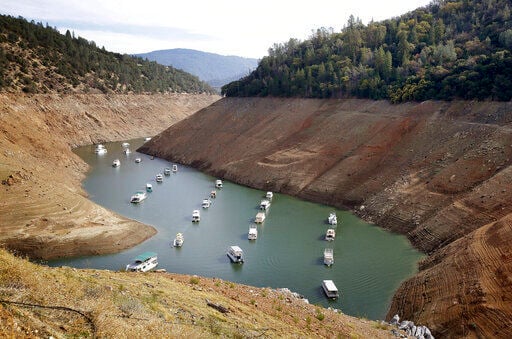 In this Oct. 30, 2014, file photo, houseboats float in the drought-lowered waters of Oroville Lake near Oroville, Calif.

BILLINGS, Mont. — Rainstorms grew more erratic and droughts much longer across most of the U.S. West over the past half-century as climate change warmed the planet, according to a sweeping government study released Tuesday that concludes the situation is worsening.

The most dramatic changes were recorded in the desert Southwest, where the average dry period between rainstorms grew from about 30 days in the 1970s to 45 days between storms now, said Joel Biederman, a research hydrologist with the U.S. Department of Agriculture Southwest Watershed Research Center in Tucson, Arizona.

The consequences of the intense dry periods that pummeled areas of the West in recent years were severe — more intense and dangerous wildfires, parched croplands and not enough vegetation to support livestock and wildlife. And the problem appears to be accelerating, with rainstorms becoming increasingly unpredictable, and more areas showing longer intervals between storms since the turn of the century compared to prior decades, the study concludes.

The study comes with almost two-thirds of the contiguous U.S. beset by abnormally dry conditions. Warm temperatures forecast for the next several months could make it the worst spring drought in almost a decade, affecting roughly 74 million people across the U.S., the National Oceanic and Atmospheric Administration said.

Water use cutbacks, damaged wheat crops, more fires and lower reservoirs in California and the Southwest are possible, weather service and agriculture officials have warned. Climate scientists are calling what’s happening in the West a continuation of a “megadrought” that started in 1999.

While previous research documented a decline in total rainfall for much of the West, the work by Biederman and colleagues put more focus on when that rain occurs. That has significant implications for how much water is available for agriculture and plants such as grasses that have shallow roots and need a steadier supply of moisture than large trees.

“Once the growing season starts, the total amount of rainfall is important. But if it comes in just a few large storms, with really long dry periods in between, that can have really detrimental consequences,” study co-author Biederman said in an interview.

The total amount of rain in a year doesn’t matter to plants — especially if rains come mostly in heavy bursts with large run-off — but consistent moisture is what keeps them alive, said UCLA meteorologist Daniel Swain, who writes a weather blog about the West and was not part of the study.

The new findings were published in the journal Geophysical Research Letters. Researchers led by University of Arizona climate scientist Fangyue Zhang compiled daily readings going back to 1976 from 337 weather stations across the western U.S. and analyzed rainfall and drought data to identify the changing patterns.

Other parts of the region that saw longer and more variable droughts included the southwest Rocky Mountains, the Colorado Plateau and the Central Plains.

The rainfall study is in line with data that shows climate change already is affecting the planet.

“Climate models project that the American Southwest is very likely to experience more frequent and more severe droughts,” said William Anderegg, a University of Utah biologist and climate scientist. “This study and other recent work demonstrates that this dry down has already begun.”

The weather station data that was used in the study represents “the gold standard’ for an accurate understanding of changes being driven by climate change, said Christopher Field, an earth systems scientist and director of the Stanford Woods Institute for the Environment.

Park Williams — who studies changes in water, wildfires and climate at UCLA — cautioned more work was needed to see if the rainfall trends since the 1970s reflect a longer-term natural cycle or are tied to human-caused warming. Regardless, the combination of longer dry spells and warmer temperatures almost certainly adds to increased wildfire size, he said.

Northwestern states were largely spared from the accelerating cycles of drought. The researchers observed higher annual rainfall totals and shorter drought intervals in Washington, Oregon, Idaho and portions of Montana, Wyoming and the Dakotas.

That’s consistent with predicted alterations in weather patterns driven by climate change in which the jet stream that brings moisture from the Pacific Ocean shifts northward, they said.

A company wants to build more potato cellars. But neighbors say the ones there weren't built correctly.

About 25% of Idaho in drought; 1 area in extreme drought

About a quarter of Idaho is experiencing some degree of drought, with one pocket in the south-central part of the state in extreme drought.

Come for the bees. Or the educational activities. Or just the great food.

A group of farmers has filed an antitrust case against several big agricultural companies, contending the companies worked together to ban e-commerce sales in order to keep prices artificially high.

The global center of research for tropical cattle has to be somewhere. “Why not Illinois?” says Matthew Wheeler, University of Illinois researcher and leader of a project that has successfully bred cattle to thrive in hot climates and produce 10 times as much milk as indigenous breeds.

For the 117th time, Twin Falls Canal Co. officials opened the headgates at Murtaugh Lake on Tuesday morning. Water was expected to reach "The Forks" south of Hansen, where the Main Canal splits into the High Line and Low Line canals, by late Tuesday.

In this March 10, 2021, file photo, a woman strolls along the beach under rain clouds in Seal Beach, Calif.

In this Oct. 30, 2014, file photo, houseboats float in the drought-lowered waters of Oroville Lake near Oroville, Calif.