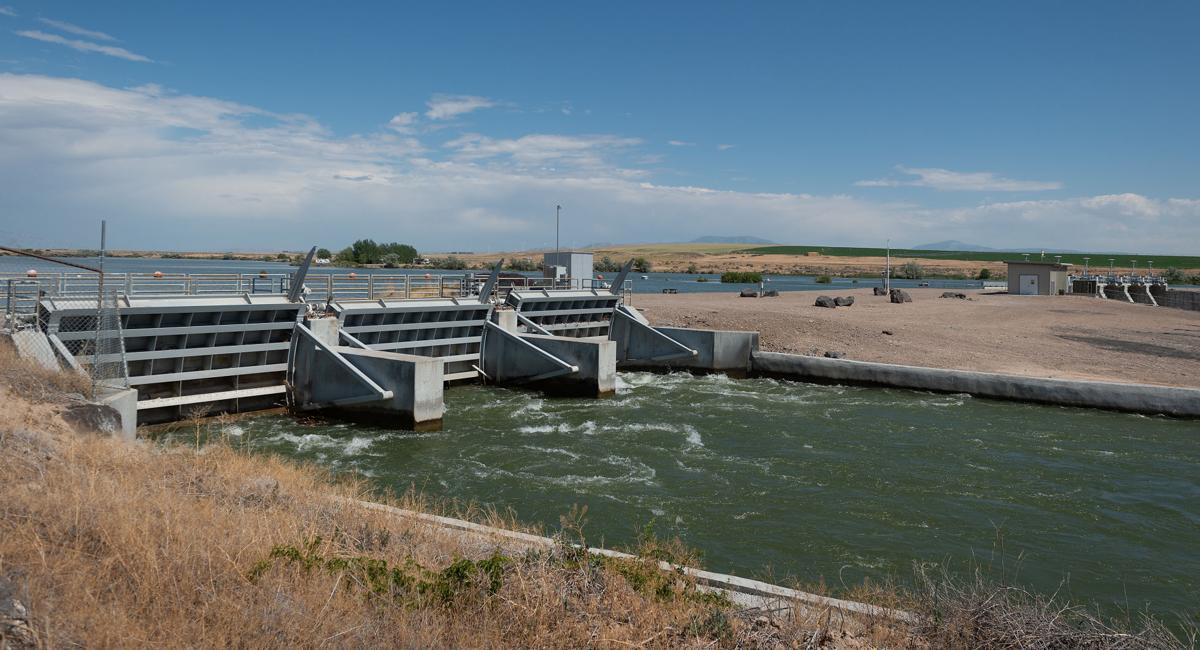 Water flows through a canal linked to Milner Dam on Wednesday near Hazelton. 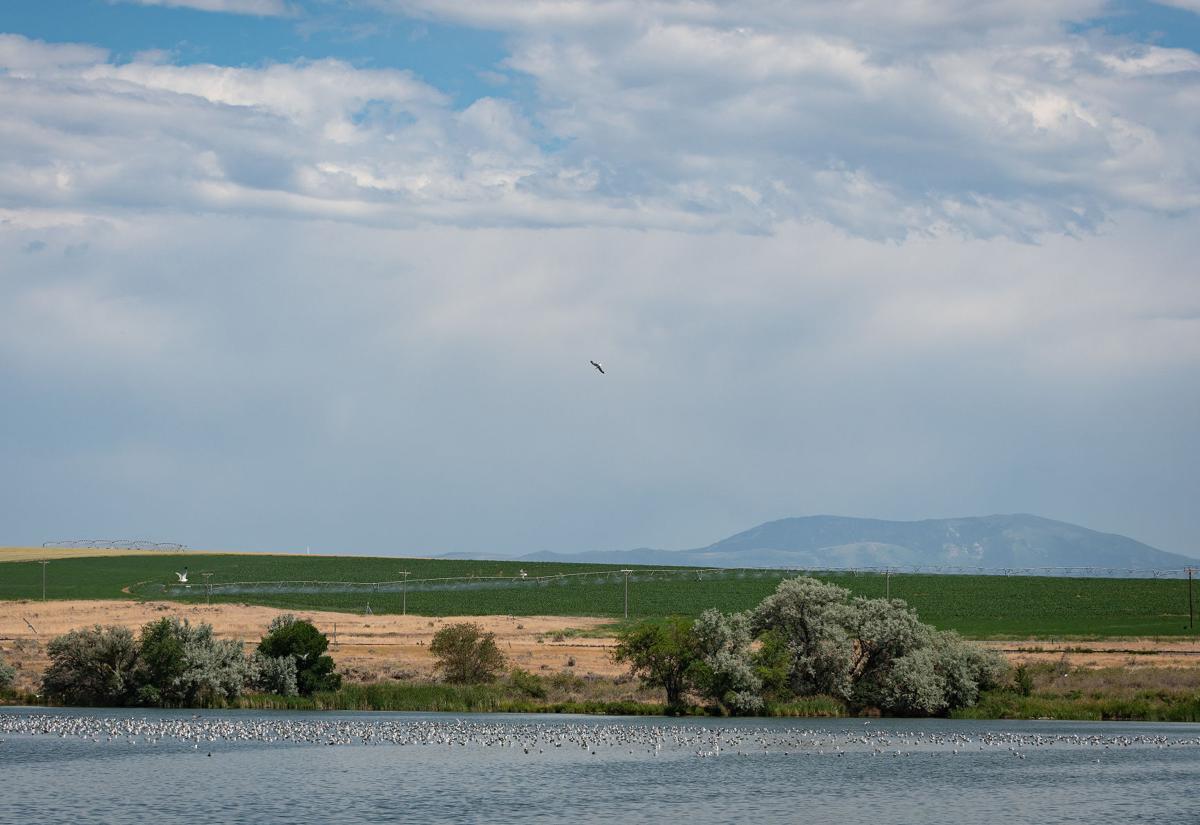 Birds mill around near Milner Dam on Wednesday, July 7, 2021, near Hazelton. 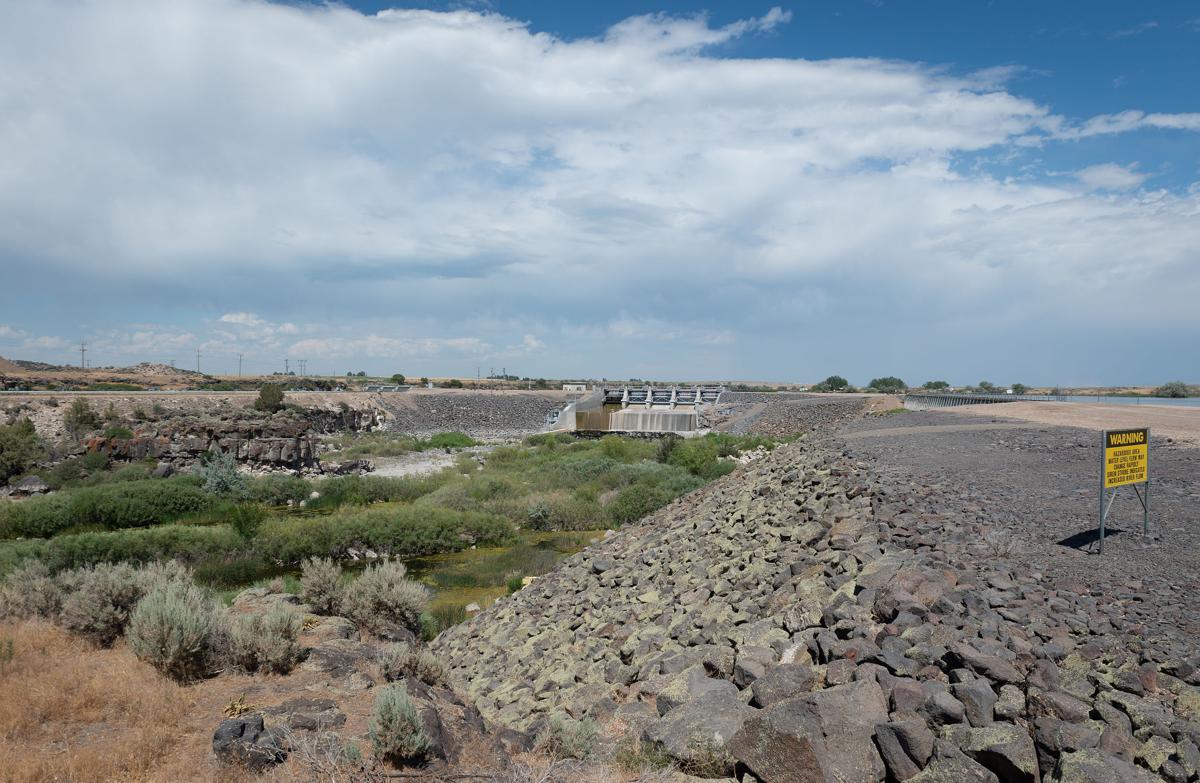 History on Milner Dam can be found around the area.

TWIN FALLS — The Bureau of Reclamation is sending 17,300 acre-feet of water down the Snake River to help migrating salmon.

This flow follows the bureau’s release of 214,000 acre-feet down the Boise and Upper Snake river systems earlier this year as part of its salmon flow augmentation program.

The bureau began releasing this additional water June 28, and it will likely continue until July 12. This release is needed to make up for lower than anticipated water levels in the Payette River System, said Joel Fenolio, water management group operations team supervisor for the bureau’s Columbia-Pacific Northwest Region.

“What happened this year is the Payette missed the refill of (storage accounts in its reservoirs), which is the first time in the last 20 years,” Fenolio said.

This additional release is taking place later in the year than is ideal because the Payette River System did not reach the water levels the bureau anticipated. Jonathan Ebel, a staff biologist with the Idaho Department of Fish and Game, said earlier releases better align with peak migration of chinook and steelhead in the river.

The water released earlier this year was helpful for salmon migration, Ebel said. But, due to the timing and the relatively low volume of water, it is difficult to determine how much this recent release will help.

The additional water could help cool down the river system as the Snake River is running a few degrees cooler than the Salmon River, which could help the fish, Ebel said.

Low water levels and warm air temperatures have heated up the water in the Salmon River to temperatures not usually seen this early in the year. The water in the river at the point where it meets the Snake River is 75 degrees. At this time last year, it was 64 degrees, which is a lot friendlier for fish.

“The hotter temperatures are not good for the salmon,” Ebel said.

The bureau has released water down the Snake River to help migrating salmon since 1991. This process has changed over the years and currently takes place in accordance with the National Oceanic Atmospheric Administration’s 2008 biological opinion.

Under this opinion, the bureau aims to release 487,000 acre-feet annually sometime in early summer. But given the levels of drought the Pacific Northwest is facing, Fenolio said the agency is lowering its target to 427,000 acre-feet this year. This additional release is needed for the bureau to reach that number.

The bureau has rights to the water it releases for this augmentation program. This includes water the agency owns outright or leases from irrigators. Fenolio said the bureau cannot force people to give up their water rights.

The additional water the bureau is releasing this year is coming out of a storage account reserved for drier years. This will have no effect on what is available for other water users, said Brian Stevens, water operations group manager for the bureau’s Snake River Area Office in Heyburn.

“There’s no way it would affect the irrigators,” Stevens said.

Although the bureau has a right to send this water downstream, the release is happening at an awkward time, said Jay Barlogi, general manager of the Twin Falls Canal Company.

A few weeks ago the company announced it would begin reducing water delivery from 3/4 inch per share to 5/8 inch effective July 6 due to the ongoing drought.

This release will not affect the water available for the company’s shareholders, but it does send a mixed message to people, Barlogi said.

“In each reservoir, everyone has their own bucket of water,” Barlogi said. “This water doesn’t come out of our bucket, but it doesn’t look right to folks.”

John Lind, general manager for the Burley Irrigation District, is also concerned about the optics of the situation.

“You’re telling farmers and other landowners they are cutting back, while water for other purposes is being sent out into the ocean, in essence,” Lind said.

Lind does not anticipate the district implementing mandatory cutbacks on allotments this year, although the district would welcome any volunteer reductions in water use.

Lind said the district is on board with the salmon flow augmentation program overall. But he is concerned about future additional releases if the next few years are as dry as this one.

“It doesn’t mean less water for us,” Lind said. “We just feel like it’s not a good precedent to send additional water out of the reservoir system.”

Editor’s note: This story has been updated to include comments from Jonathan Ebel, staff biologist with the Idaho Department of Fish and game.

PHOTOS: Milner Dam over the years

One minute after gates open at Milner

Congressman Mike Simpson made his way through the Magic Valley this week to discuss his proposal for breaching the four dams on the Lower Snake River as a way to end years of lawsuits and save a species heading toward extinction.

Water flows through a canal linked to Milner Dam on Wednesday near Hazelton.

Birds mill around near Milner Dam on Wednesday, July 7, 2021, near Hazelton.

History on Milner Dam can be found around the area.