Become a Member
Read Today's E-edition
Share This
Q&A: La Nina's back and it's not good for parts of dry West
0 comments
Share this
1 of 2 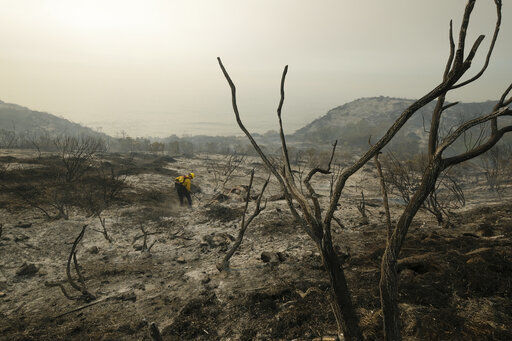 In this Wednesday, Oct. 13, 2021 file photo, County of Santa Barbara Fire Department firefighters extinguish a roadside fire next to train tracks off of the U.S. 101 highway in Goleta, Calif. 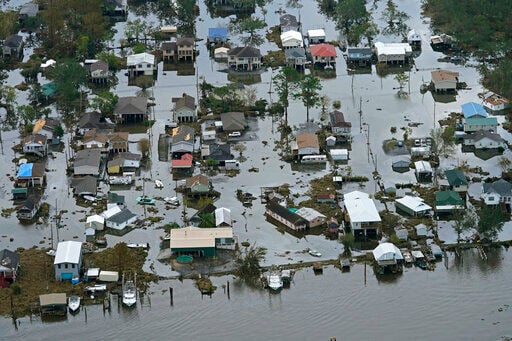 In this Wednesday, Sept. 1, 2021 file photo, floodwaters slowly recede in the aftermath of Hurricane Ida in Lafitte, La.

For the second straight year, the world heads into fall and winter with a La Nina weather event. This would tend to dry out parts of an already parched and fiery American West and boost an already busy Atlantic hurricane season.

Just five months after the end of a La Nina that started in September 2020, the U.S. National Oceanic and Atmospheric Administration announced a new cooling of the Pacific is underway.

La Nina’s natural cooling of parts of the Pacific is the flip side of a warmer El Nino pattern and sets in motion changes to the world’s weather for months and sometimes years. But the changes vary from place to place and aren’t certainties, just tendencies.

La Ninas tend to cause more agricultural and drought damage to the United States than El Ninos and neutral conditions, according to a 1999 study. That study found La Ninas in general cause $2.2 billion to $6.5 billion in damage to the U.S. agriculture.

How strong and how long will it last?

There’s a 57% chance this will be a moderate La Nina and only 15% that it will be strong, said Mike Halpert, deputy director of NOAA’s Climate Prediction Center. He said it is unlikely to be as strong as last year’s because the second year of back-to-back La Ninas usually doesn’t quite measure up to the first.

This La Nina is expected to stretch through spring, Halpert said.

What does this mean for the West?

For the entire southern one-third of the country and especially the Southwest, a La Nina often means drier and warmer weather. The West has been experiencing a two decade-plus megadrought that’s worsened the last couple of years.

“Good for them, probably not so good for central, southern California,” Halpert said.

The Ohio Valley and Northern Plains could be wetter and cooler. La Nina winters also tend to shift snow storms more northerly in winter while places like the mid-Atlantic often don’t get blockbuster snowstorms.

What about Atlantic hurricane season?

During last year’s La Nina, the Atlantic set a record with 30 named storms. This year, without La Nina, the season has still been busier than normal with 20 named storms and only one name left unused on the primary storm name list: Wanda.

The last couple weeks have been quiet but “I expect it to pick up again,” Halpert said. “Just because it’s quiet now, it doesn’t mean we won’t still see more storms as we get later into October and even into November.”

La Ninas tend to make Atlantic seasons more active because one key ingredient in formation of storms is winds near the top of them. An El Nino triggers more crosswinds that decapitate storms, while a La Nina has fewer crosswinds, allowing storms to develop and grow.

What about the rest of the world?

Much of both southeast Asia and northern Australia are wetter in La Nina — and that’s already apparent in Indonesia, Halpert said. Central Africa and southeast China tend to be drier.

Expect it to be cooler in western Canada, southern Alaska, Japan, the Korean peninsula, western Africa and southeastern Brazil.

The largest dairy transport company in the U.S. has started construction on a new facility in Jerome.

Not just for beer: New plant gives farmers another reason to grow barley

Most of the Magic Valley's barley goes to making beer, but that might soon change, and "it all started with a lot of good old American elbow grease and an idea."

Seth Meyer was appointed USDA’s Chief Economist in January of 2020, returning to USDA after two years. Prior to his return, Seth was a researc…

While some vineyards saw 25% decrease in yields, a local Buhl vineyard saw three to four times the fruit.

"It creates diversity in the soil and in someone's pocketbook as well."

CHAMPAIGN, Ill. — The days are numbered for a 1920s-era concrete feed mill that was a landmark near the University of Illinois Urbana-Champaig…

In this Wednesday, Oct. 13, 2021 file photo, County of Santa Barbara Fire Department firefighters extinguish a roadside fire next to train tracks off of the U.S. 101 highway in Goleta, Calif.

In this Wednesday, Sept. 1, 2021 file photo, floodwaters slowly recede in the aftermath of Hurricane Ida in Lafitte, La.