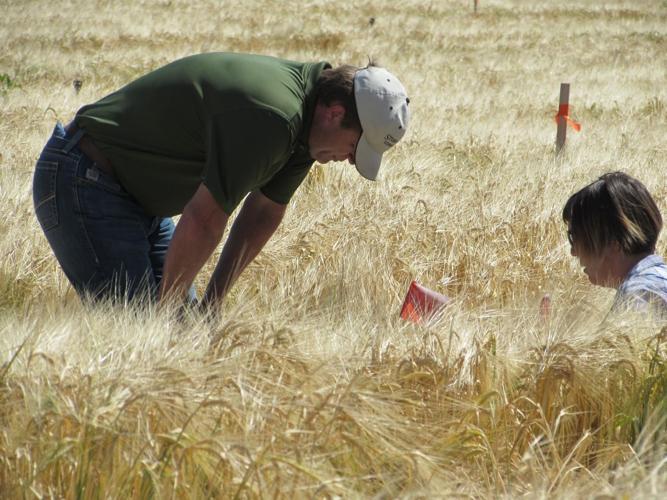 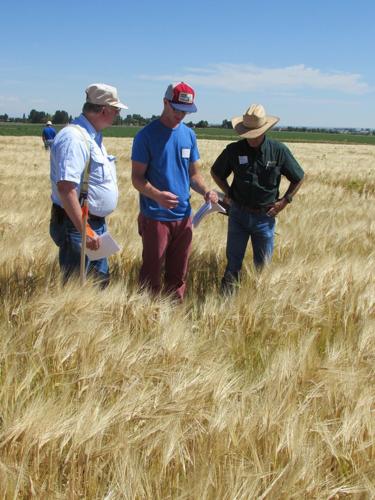 David Graybill, a graduate student with the University of Idaho, discusses soil nitrogen mineralization with Liddle Offenbacker, left and Steve Hines, right, during a recent tour of a long-term manure study. Offenbacker is with the USDA Natural Resources Conservation Service in Aberdeen and Hines is the UI Extension educator in Jerome County.

CINDY SNYDER For the Times-News

KIMBERLY • Researchers are just three-eighths of the way through a long-term manure study but some of the early results have got them re-thinking long-held assumptions about nutrients in high desert soils.

One of those assumptions is that it’s hard to boost organic matter in southern Idaho fields. Organic matter comes from decaying crop residue or plant matter. The deep, dark, rich color of Midwestern farmland is a result of high organic matter.

But, researchers with the University of Idaho and federal Agricultural Research Service are seeing organic matter levels steadily increase in plots that have received manure annually from about 1.3 percent to 2 percent at the lowest manure application rate (20 tons per acre) and as much as 2.8 percent at the highest rate (60 tons per acre).

Fields receiving manure applications every other year showed a bump after the first year. Those levels remained steady in 2014 and 2015 for the 20-ton and 40-ton per acre rates, but are still increasing at the 60-ton per acre rate.

Soil scientists have long thought phosphorus binds so tightly to soil particles that farmers and researchers don’t have to worry about moving through the soil profile. But soil tests from plots at the long-term manure study near Kimberly indicate phosphorus is moving into the second foot of soil.

For the first two years of the study, soil phosphorus levels remained below the 40 parts per million threshold set by the state’s nutrient management guidelines. This year, levels exceeded that threshold in plots that have received the two heaviest manure applications both annually and biennially.

She is curious to see whether the grain crops grown this year will pull enough phosphorus from the soil to drop the levels back below the threshold and if the levels drop in the biennial plots after taking a year off.

Half the plots were planted to wheat this year, with the other half planted to barley. Next year, potatoes will be planted in this year’s wheat plots with sugar beets following the barley. Another question researchers are asking is whether sugar beet tops plowed back into the plots are contributing to the rise in phosphorus.

Both potatoes and sugar beets require more irrigation water than grain crops, which may also have helped to push phosphorus through the soil profile. Moore is asking more questions than she has explanations for this season, but hopes to discover answers during the remaining five years of the study.

Researchers are also looking at nitrate mineralization in the soil. Mineralization rates in mid-July were already well ahead of the season-long accumulation in 2014. Kate Cassity-Duffey, a post doctoral candidate working on that portion of the study, thinks two weeks of triple digit temperatures in early July accelerated the mineralization process.

She hopes to show a relationship between temperature and mineralization rates so that growers can better time supplemental nutrient applications for maximum crop efficiency. Today farmers are left guessing when the nitrogen from manure or compost applications or cover crops will become available for crop use.

Another benefit to growers from this study may be improved nutrient guidelines. “We may need to revise the (UI fertilizer) guidelines to account for heavier manure applications and late season mineralization,” she said.

But that’s why researchers do projects like this — to see if what they thought was true, still is.

University of Idaho’s Center for Agriculture, Food and the Environment (CAFE) received a $1 million donation from Chobani, the food maker announced Wednesday.

While a wet start to the growing season may bring disease pressure, weeds will pose their own challenge in 2022.

"You could take a graduating class, graduating this year, and have them all have a job at this job fair," said one employer at the CSI Workforce and Development Job Fair last week.

Senior priority surface water users in the Eastern Snake River Plain region could face a 162,600 acre-foot shortfall this year, according to a press release from the Idaho Department of Water Resources.

SCRANTON, Iowa — Justin Robbins and his family place a priority on sustainability and leaving the land better than they found it.

Here are some money traps and how to avoid them

Here are some money traps and how to avoid them

Why you should start repaying your loans early

Why you should start repaying your loans early

Gas prices back on the rise in the United States

Gas prices back on the rise in the United States

David Graybill, a graduate student with the University of Idaho, discusses soil nitrogen mineralization with Liddle Offenbacker, left and Steve Hines, right, during a recent tour of a long-term manure study. Offenbacker is with the USDA Natural Resources Conservation Service in Aberdeen and Hines is the UI Extension educator in Jerome County.