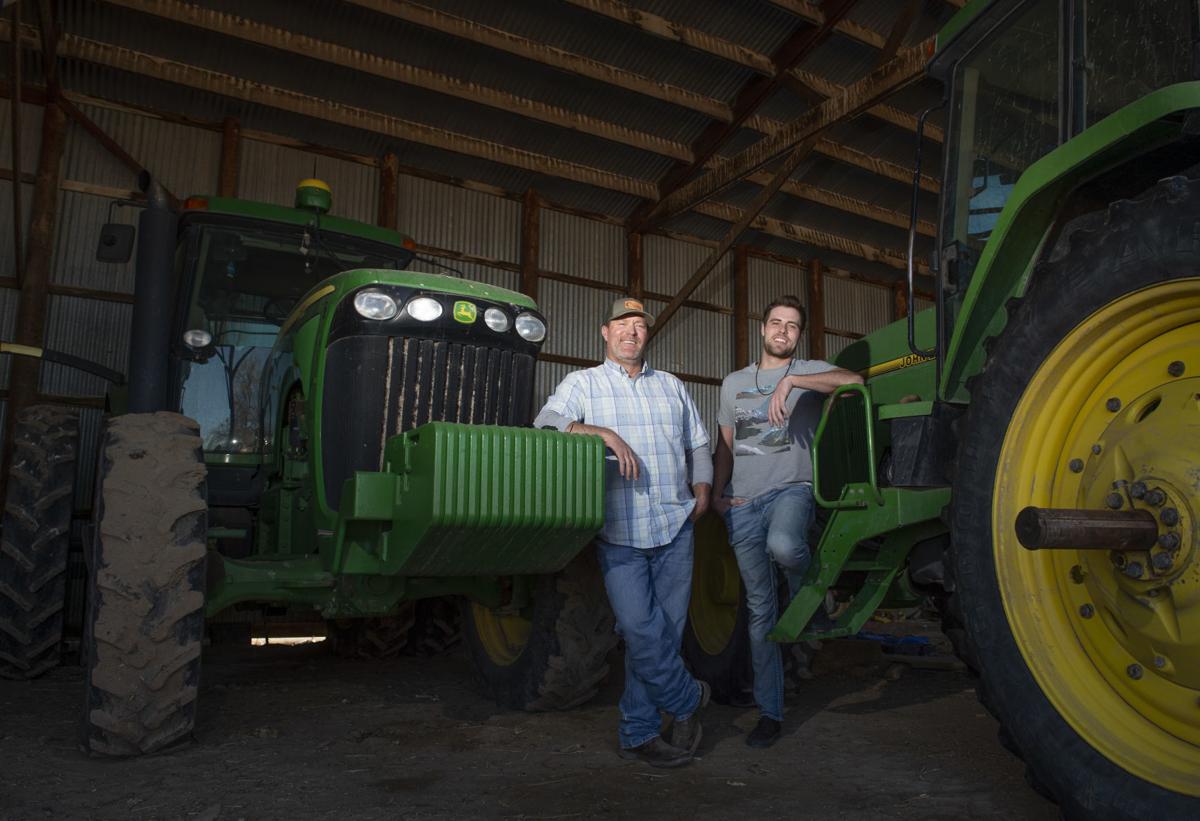 Grant Cummins and his son, Parker, have their photo taken with some of the tractors they use to farm mint Friday near Murtaugh. 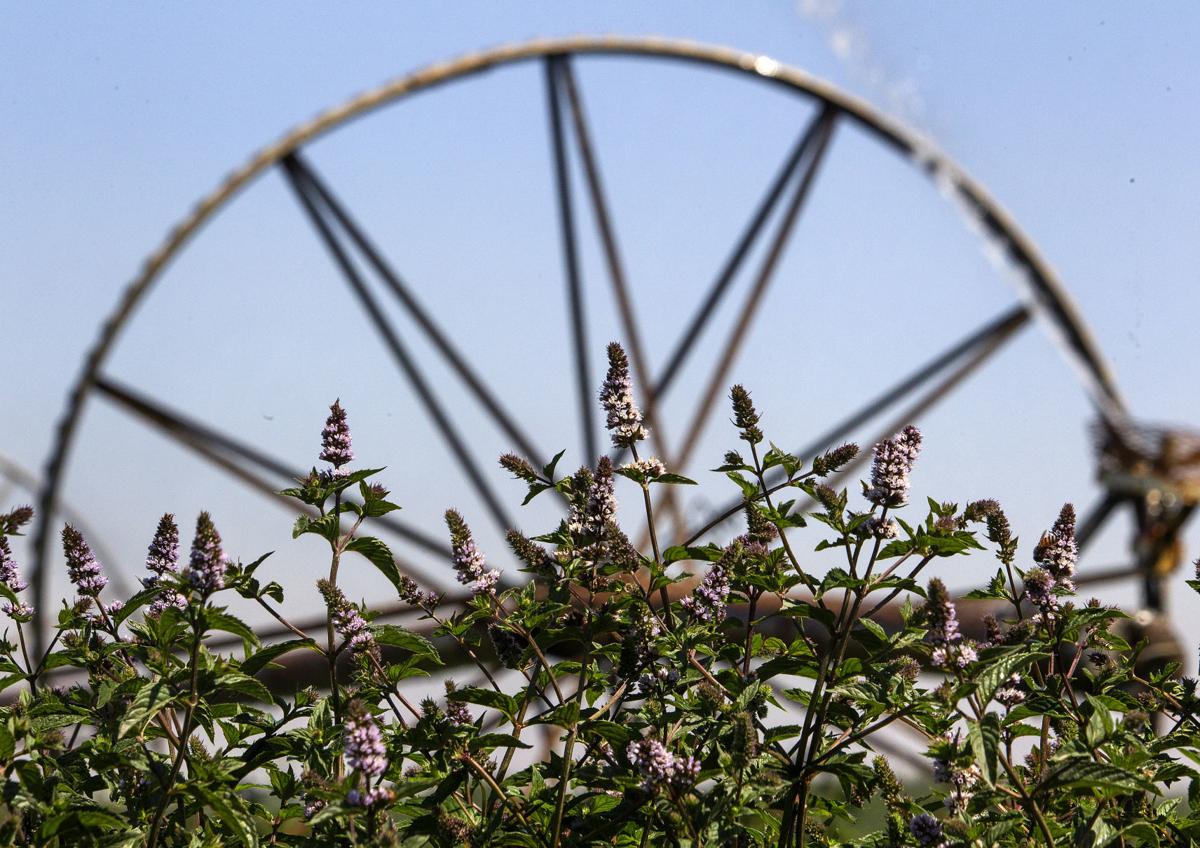 A wheel line shoots water onto a peppermint field July 29, 2016, south of Twin Falls. Each August, grower Grant Cummins swaths, dries and distills the crop to extract its oil. Each fall and again in the spring, Cummins digs certified rootstock from the field to sell to other growers. 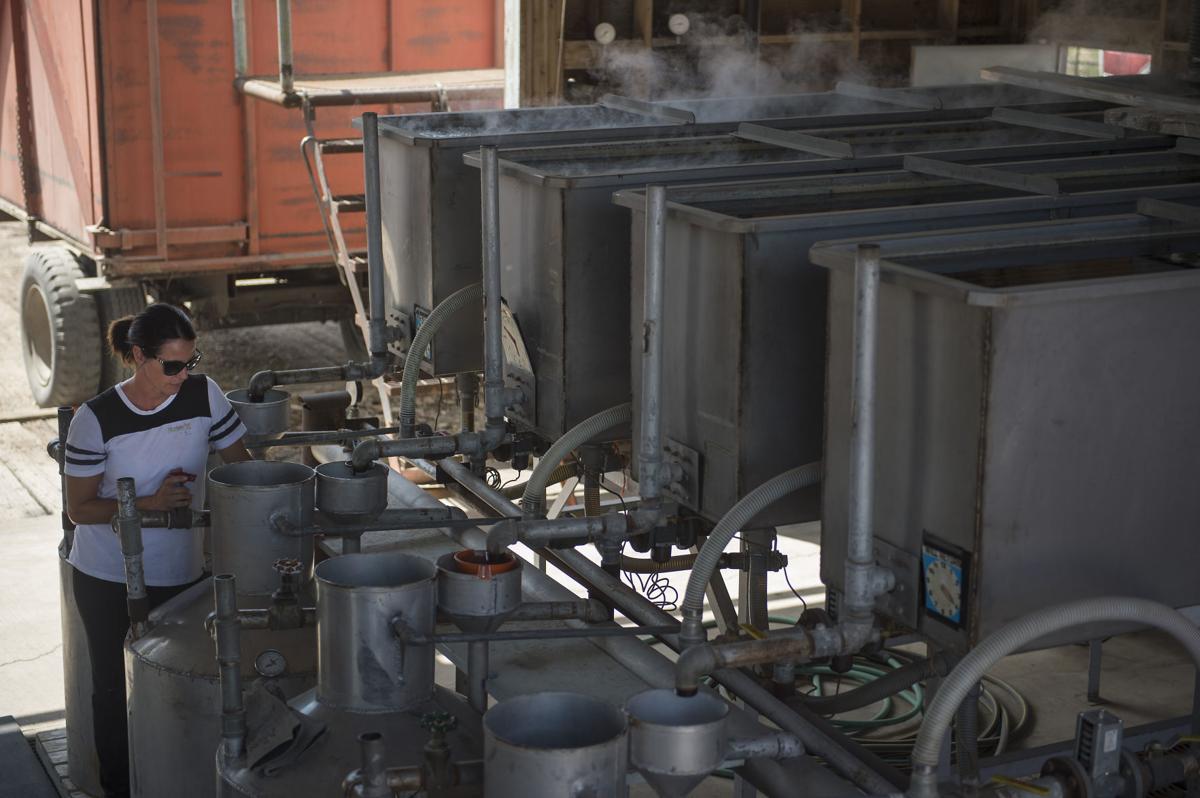 Leah Cummins keeps an eye on the still Aug. 30 near Murtaugh. 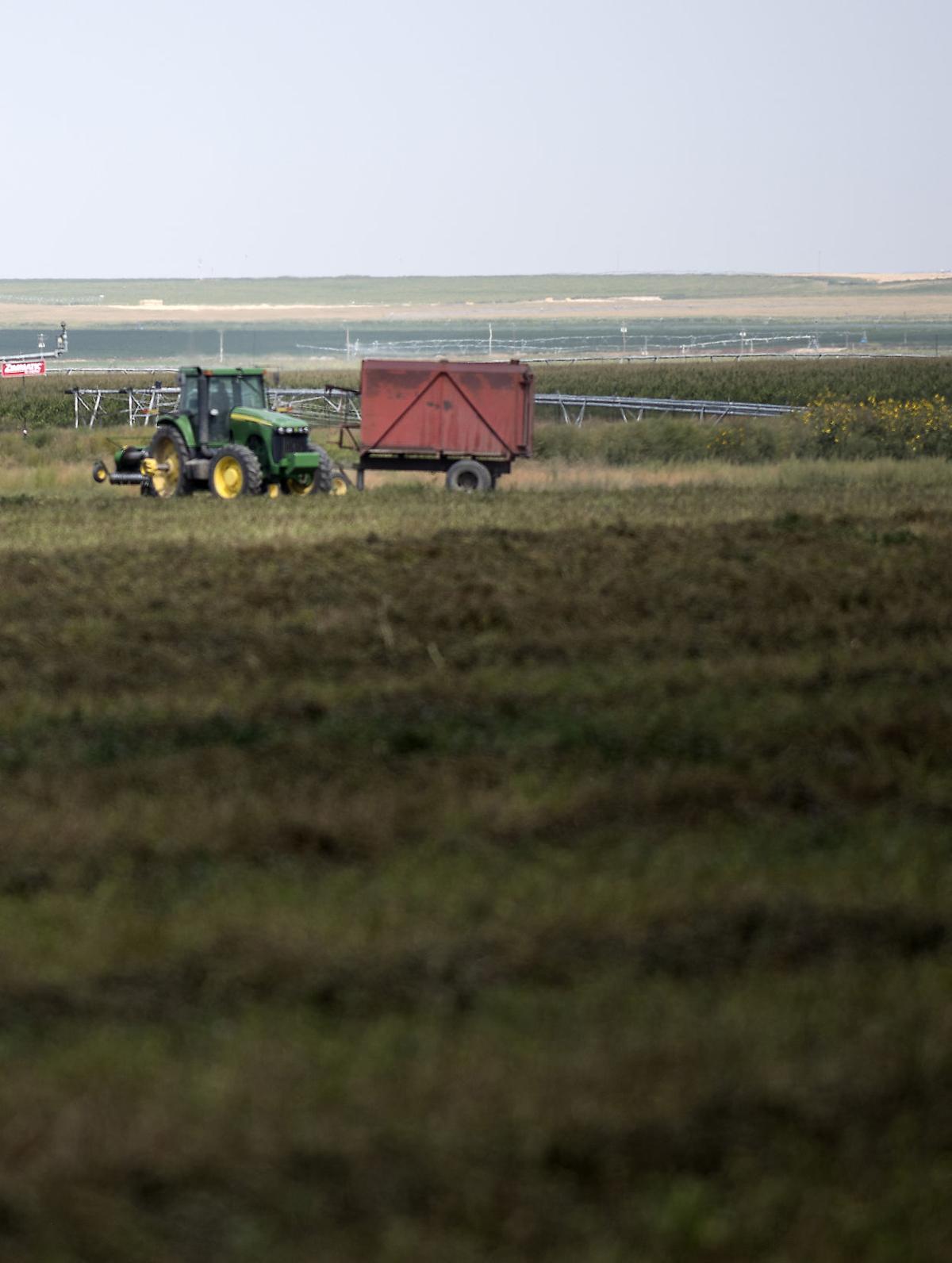 Mint is harvested Aug. 30 near Murtaugh. 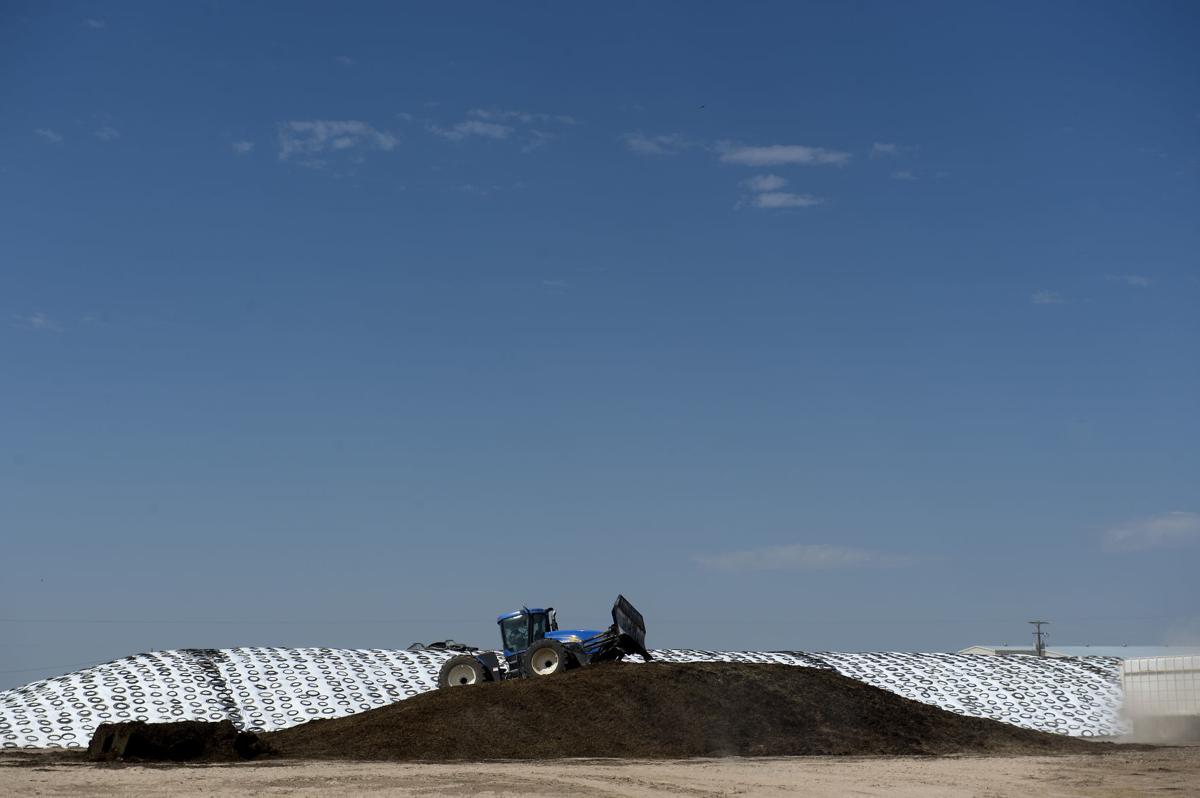 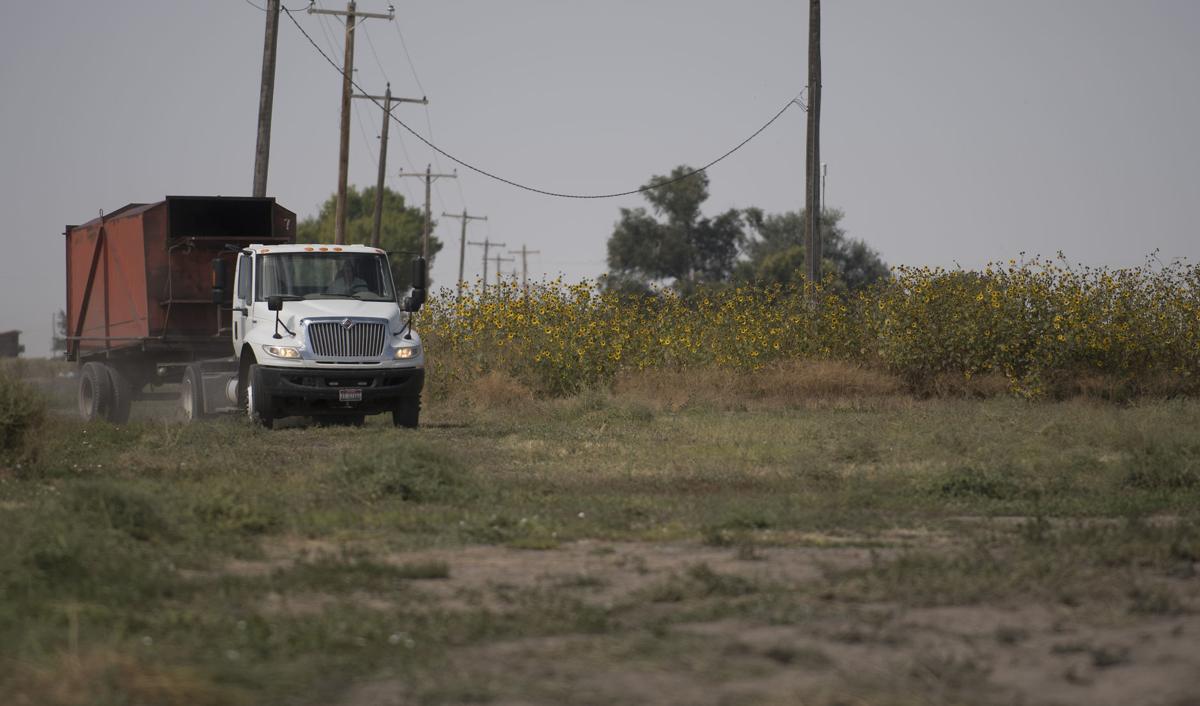 A truck enters a field to drop off an empty mint container Thursday, Aug. 30, 2018, near Murtaugh. 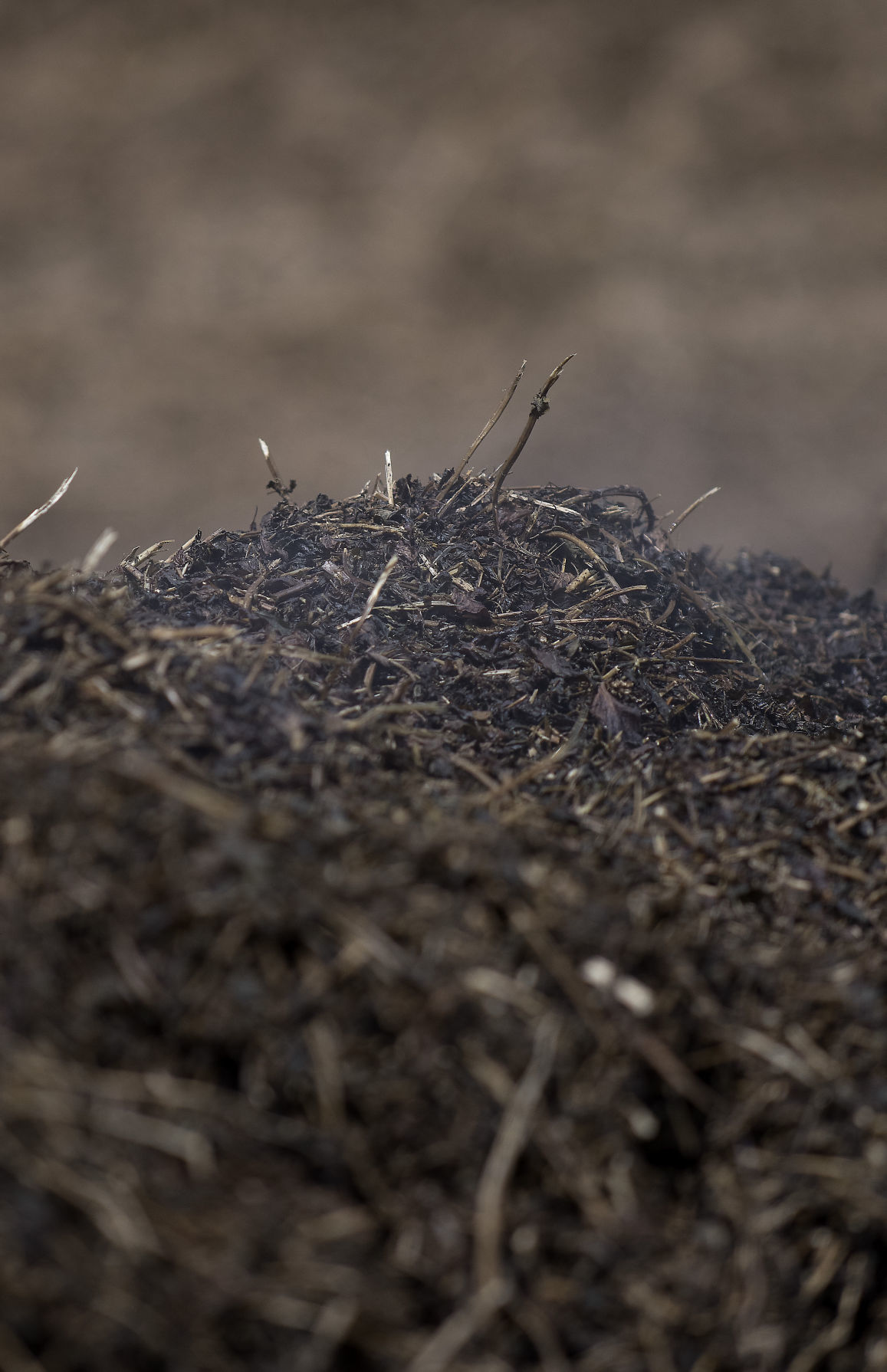 Steam rises from mint after being dumped Aug. 30 near Murtaugh. 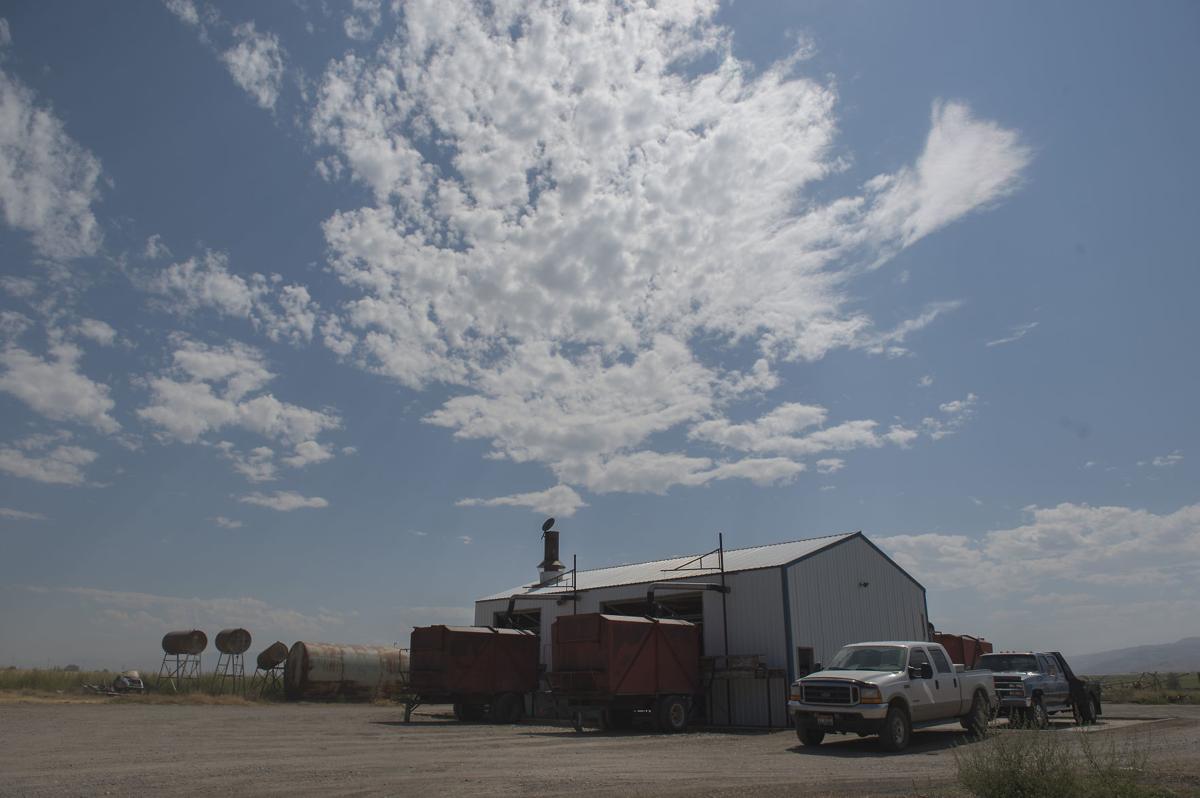 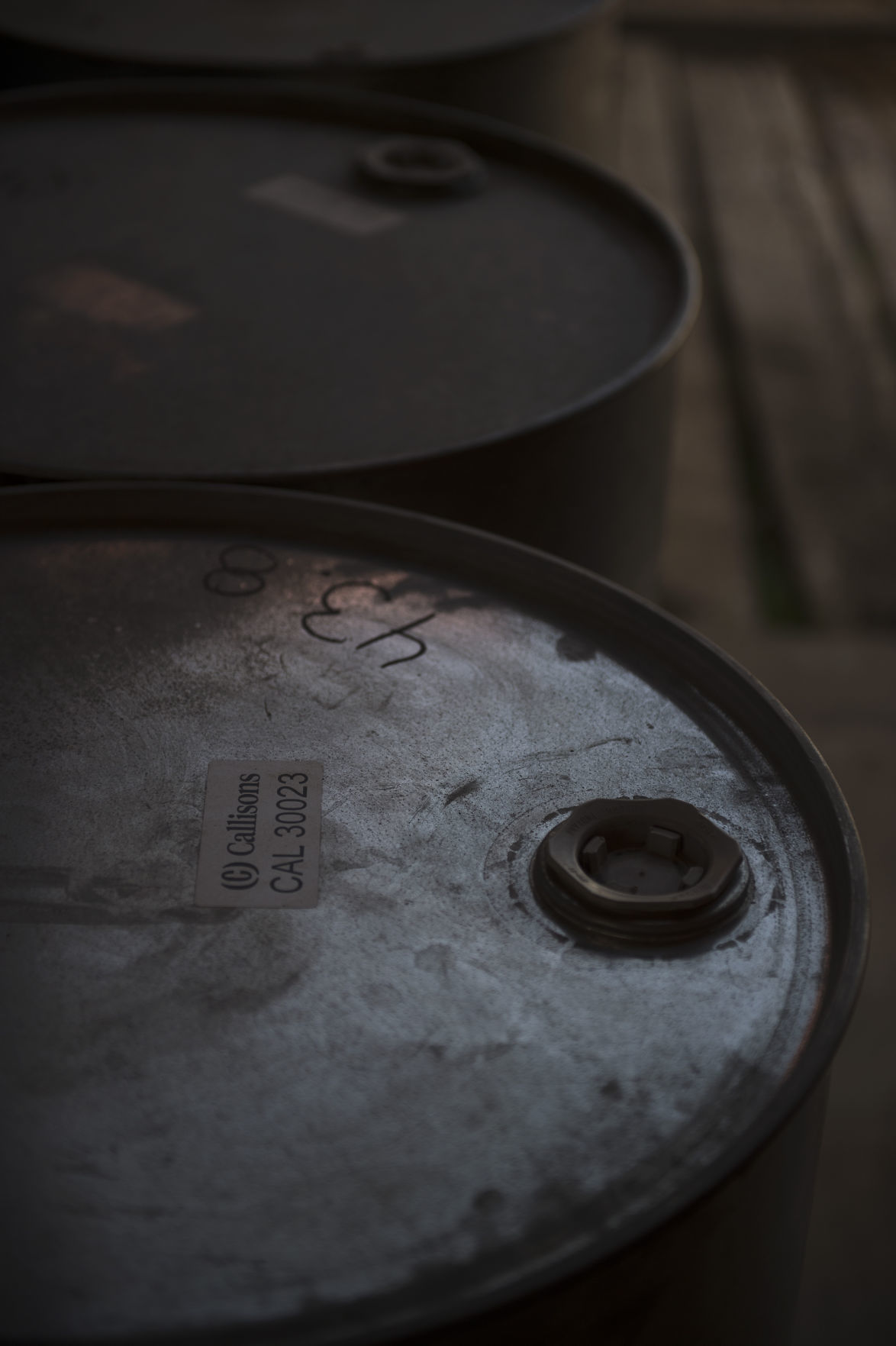 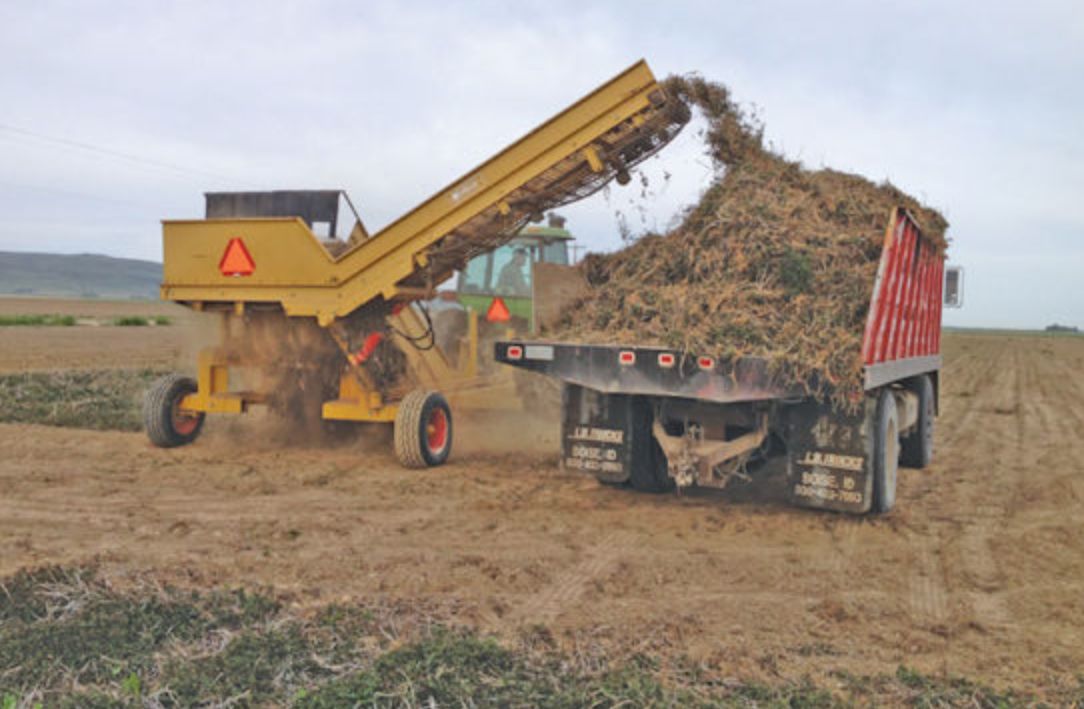 Grant Cummins digs black Mitcham peppermint rootstock May 25, 2014, from a field near Murtaugh. The certified rootstock is whisked away to a waiting semi-trailer then raced to another mint grower in northern Idaho.

Grant Cummins and his son, Parker, have their photo taken with some of the tractors they use to farm mint Friday near Murtaugh.

A truck enters a field to drop off an empty mint container Thursday, Aug. 30, 2018, near Murtaugh.

KIMBERLY — You may not recognize a mint farmer by the looks of him, but his aromatic crop is unmistakable. Its sweet, spicy-cool scent makes mint one of man’s most valued herbs.

Black Mitcham peppermint resembles alfalfa in the field, but its dark green foliage puts off an odd purple hue, puzzling those unfamiliar with the crop until they get a whiff of it. The essential oil distilled from the leafy plant packs a powerful punch: One single drop of peppermint oil is enough to flavor 125 candies.

“The oil is so pure that if you dip your finger in it and taste it, it will take your taste away for half the day,” said Chad Neeley, president of the Idaho Mint Growers Association.

Idaho ranks second nationally in peppermint oil production, according to the U.S. Department of Agriculture, and third nationally in overall mint production. Some 16,000 acres are grown in the state.

Still, the amount of mint grown in Idaho is a drop in the bucket compared with the hundreds of thousands of acres of potatoes and sugar beets grown here, making Grant Cummins’ crop of peppermint a novelty rather than a staple.

A niche market is a narrowly defined group of potential customers that — like the mint market — has specific needs, said Julia Oxarango-Ingram, a rural economic developer based in Shoshone.

Niche farming has become a lifestyle for many as they adapt to a non-traditional business model.

“I know that these kind of niche farmers are looking at other structures, like employee-owned or co-ops,” Oxarango-Ingram said. “A lot of the niche businesses are turning to a new business model in ag.”

The Kimberly grower’s opportunity came more than 10 years ago when longtime mint-grower Ray McFarland put his Murtaugh-based mint operation up for sale. Cummins traded in his spud crop for the specialty crop.

“Mint growers have their own community,” Neeley said.

About 90 percent of all mint oil produced goes into candy, gum and toothpaste, and the other 10 percent is used for medicinal purposes. Extracting oil from the peppermint crop, however, is only part of Cummins’ business.

Cummins, Neeley said, is one mint grower who has gone “all in” by growing and selling certified rootstock in addition to producing oil.

The plants used for oil production don’t grow from seed. Peppermint is a perennial, so the roots survive from year to year, and from field to field. But Idaho mint growers who also sell certified rootstock — growers such as the 49-year-old Cummins — are on a short list.

Cummins “thins” his crop twice a year, and sells and ships his certified rootstock to other growers. He harvests the roots early in the fall or in the spring when the plant is just waking from its winter dormancy.

A disc harrow slices the ground ahead of his tractor and a rototiller on his mint digger chops and pulls pieces of roots from the soil. A conveyor belt deposits the loose roots in a truck that runs alongside the tractor.

The rootstock is whisked away by truck and planted in another grower’s field — a dozen miles away or maybe 400 — for future candy canes and mint juleps.

The root-digger leaves a small portion of the rootstock in the field, which will rapidly regenerate and be ready for mint oil harvest in August.

In late March, Cummins receives and plants “nuclear” rootstock — first generation plants grown under sterile conditions in a greenhouse to reduce disease — into a “virgin” field where mint has never been grown before.

Nuclear plants are delivered on flats each spring, like bedding plants at a nursery, he said.

“It takes all day to plant a half mile,” he said of the labor-intensive job. He plants four acres of “plugs” each year.

The following October when there’s a chill in the air, he digs and replants the plugs into a 40-acre field. The mint crop will then stay in the same field for two years during a typical rotation, Cummins said. He follows the mint crop with dry edible beans, usually pinks.

Each year, Cummins plants new nuclear rootstock to replace the 40-acre field that just fell out of the mint phase of the rotation, keeping about 100 acres of mint growing at any time.

Mint growers need disease-free rootstock, Neeley said. Because of its elevation, the Magic Valley is free of many of the diseases that typically hit the crop, giving Cummins an advantage over many mint growers in other areas of the state.

Verticillium wilt in mint — a fungus — is not an issue in the Magic Valley as it is in Neeley’s neighborhood in the Treasure Valley.

Because mint is so volatile, the grower’s ability to harvest the plant and distill the oil depends on his access to specialized equipment.

Neeley and Lete grow 700 acres of their own mint and process 1,500 acres for other mint growers who don’t have their own still.

When the field is ready, Cummins will swath the mint and sweep the crop into windrows where it will cure for a few days. A tractor-drawn harvester will chop the windrows and deposit one ton of mint “hay” into a special mint trailer that is hauled to his distillery, a converted metal shop near Murtaugh.

Cummins then hands the reins to his wife, Leah, who runs the still assisted by various family members.

She attaches hoses to the trailer and shoots live steam from a boiler through the chopped mint. The mixture of steam and vaporized oil collects inside a coil, then drips into a separator. The oil, which floats on the water, is tapped from the top and stored in a drum.

The steamed mint is hauled — still in the mint trailer — to a field where it is dumped and tilled under as “green manure,” or to a silage pit where it is turned into fodder for dairy cattle.

As with any novelty or specialty crop, there is a unique relationship between the grower and the grown. Growing mint is not for everyone, Cummins said.

Mint grows like a weed, but its planting and harvesting is laborious.

“The payoff is pretty good,” he said, “but not like a potato crop.”

What led Cummins to peppermint?

“I had the opportunity,” he said.

How far can mint oil stretch?

A 400-pound drum of mint oil will produce approximately:

Broken down further, one pound of mint oil will produce approximately:

Broken down even further, one ounce of mint oil will produce approximately:

Broken down even further, one drop of mint oil will produce approximately:

BILLINGS, Mont. — The Trump administration on Friday finalized changes to sweeping federal land use plans for Western States to ease energy in…

We can deliver obituaries to your email. Sign up here.