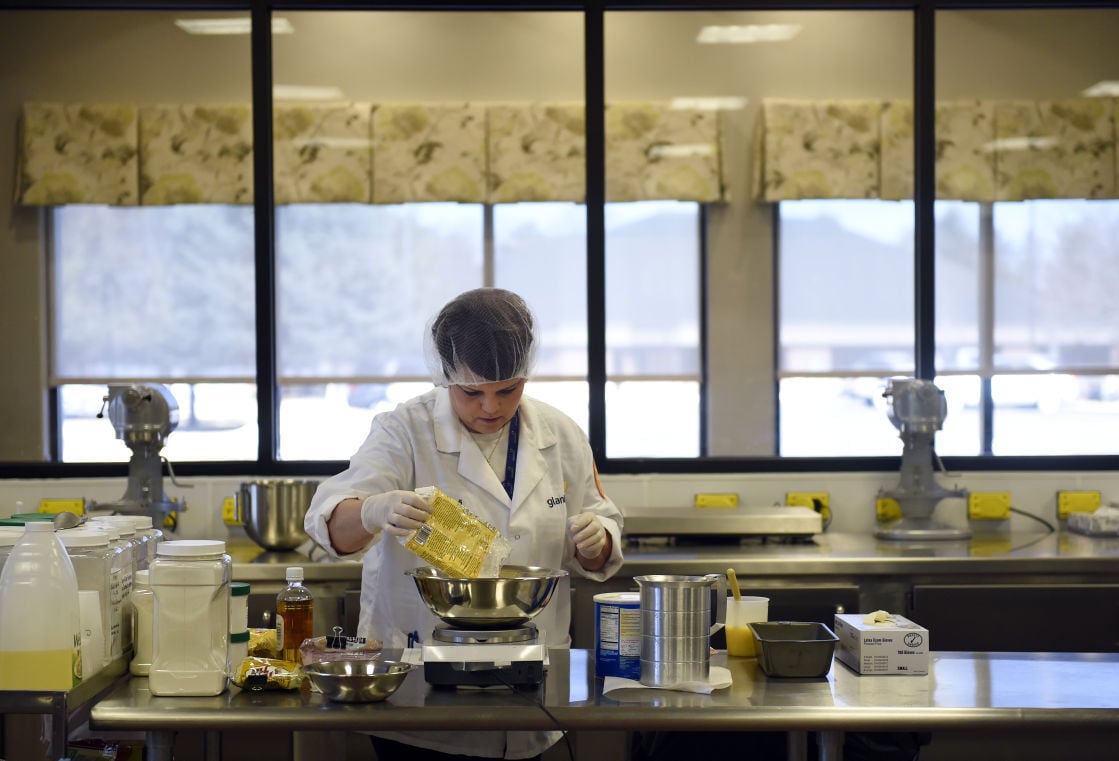 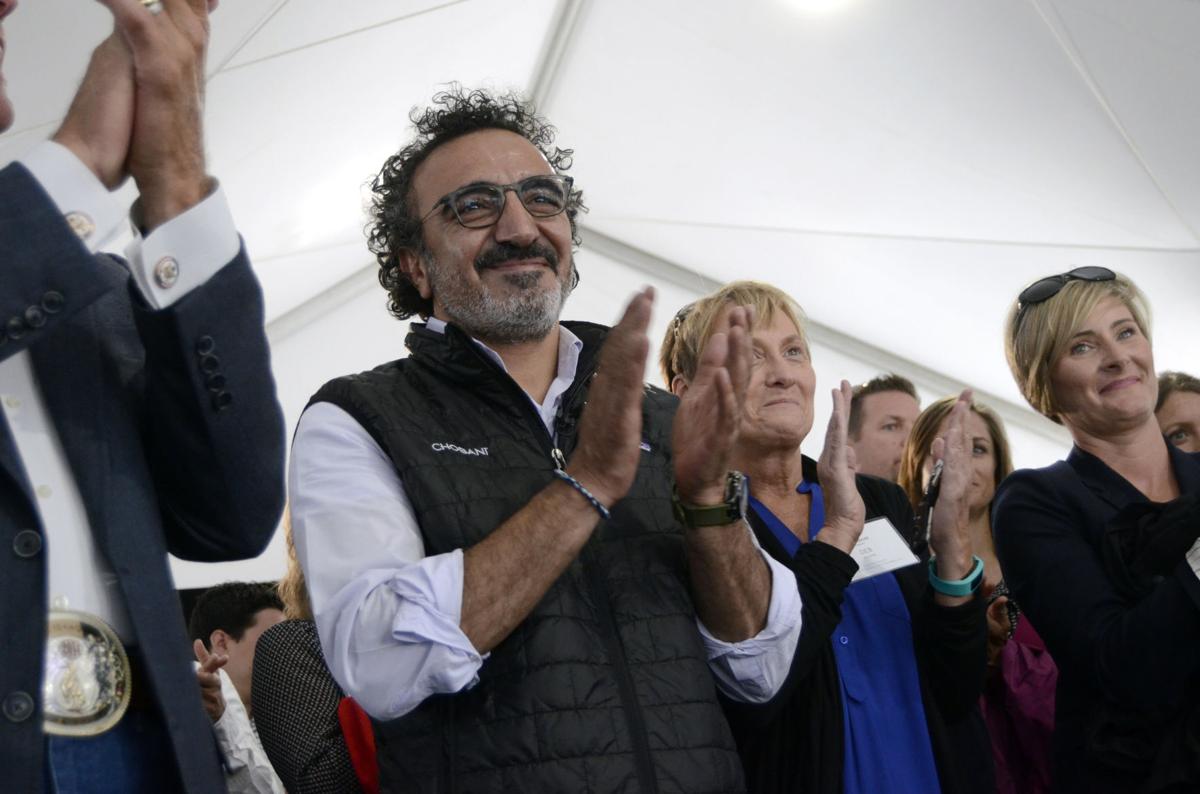 Chobani CEO Hamdi Ulukaya listens to Twin Falls Mayor Shawn Barigar speak in 2016 in Twin Falls. A proposed food innovation center and business incubator would give entrepreneurs access to equipment to test their ideas and capital to bring their new products to the marketplace. 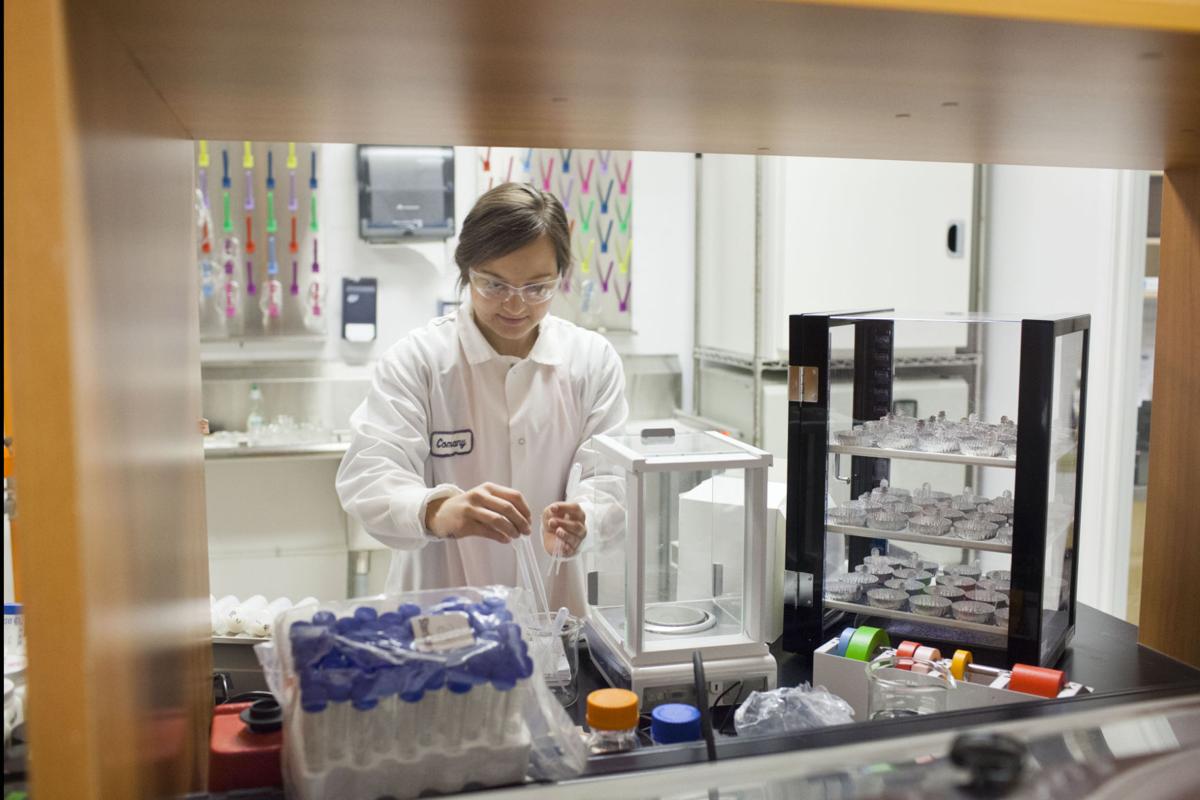 TWIN FALLS — The Magic Valley is already one of America’s biggest agricultural hubs, but a new project could take the region’s food innovation capabilities to the next level.

A team representing economic development groups, colleges and the dairy industry has commissioned a feasibility study to see if the Magic Valley would be a good place for a food innovation center and business incubator.

The food innovation center would give entrepreneurs a physical space to test their ideas. It would include specialized equipment — picture a commercial kitchen and rooms for research and development. It could have office space, and come staffed with specialists able to provide marketing guidance, scientific expertise and more.

Individuals and small businesses with ideas indirectly linked to food — a logistics solution, or a new way to use drone technology for instance — could use the innovation center, too. The building could be a sort of Swiss Army knife for food innovation.

The business incubator component would provide money to turn those ideas from mere concepts to marketable products.

Southern Idaho Economic Development Executive Director Connie Stopher said she thinks the innovation center and incubator could attract food businesses to the Magic Valley. She pointed out that the Magic Valley has a ton of big food processors. The region does big ag really well. But an innovation center and incubator could bring new kinds of food businesses and help the region produce the next big thing in food.

A small food-based business can’t afford its own large research and development facility, Stopher explained. If there were a funded, communal one, it could foster creativity, give food entrepreneurs a chance they wouldn’t otherwise have had.

The project is still in the early stages. The feasibility study will determine whether or not a food innovation center and business incubator could be sustainable here long term.

If it happens, the project could help Magic Valley agriculture expand and diversify.

“How do we grow the next Chobani?” Stopher said. “There are people out there in our community that have wonderful food ideas, but they don’t know how to take them to the next level. They know that they can make a product that can be on store shelves, but they either need the business help, they need the food science help, or they need both.”

Jeff McCurdy was excited about the food innovation center and business incubator idea when he took the Region IV president and CEO job about a year ago. But he was a bit surprised to find out a bunch of people seemed to have come up with the same idea already on their own. He realized it might be possible to get the project started relatively quickly, rather than five or six years down the road. So he put together a team to see if an innovation center and business incubator would be possible.

Is the Magic Valley market big enough to support it? Would there be enough interest? The feasibility study — paid for by a $25,000 Chobani grant, a $20,000 U.S. Department of Agriculture grant and $5,000 each from Region IV, Southern Idaho Economic Development, Dairy West and Business Plus — should answer those questions. The study is expected to have some answers in February and it should wrap up by June.

Right now it’s unclear exactly what the facility would look like. KRNLS, the Pittsburgh-based firm conducting the study, will have to figure out what kind of equipment the center would need and how big it would have to be.

There are three potential sites for the facility so far. It could be in downtown Twin Falls, on the CSI campus or part of the planned Idaho Center for Agriculture, Food and the Environment (CAFE) facility in Jerome at the U.S. Highway 93 and Interstate 84 intersection.

McCurdy said the innovation center cost won’t be known until the project committee has a better sense of what it’ll include.

KRNLS Principle and Co-founder Olga Pogoda said that a food innovation center affiliated with Rutgers University in New Jersey cost $15 million (the plant-based meat substitute used in the Impossible Whopper was developed there). She said she hopes the Magic Valley facility won’t cost as much.

Adding a food innovation center and business incubator would check a lot of economic development boxes.

Stopher noted that it could convince foreign companies to come to Idaho. Maybe an international company has been thinking about coming to the U.S., but isn’t ready to build a 1-million square-foot facility. The innovation center would solve that problem by giving the company the tools it needs to do testing, allowing it to prepare its products for the American market.

It would also be a boon for small businesses trying to expand or try something new, Stopher said. A home business, or a business with a small facility, could use the expensive, specialized equipment to prepare its products for wider distribution or benefit from the expertise of the facility’s staff and educators.

Providing small businesses with those resources would give the local economy a boost.

Jenn Nelson has wanted a food innovation center in the Magic Valley for years. The Dairy West senior vice president of innovation partnerships sees a lot of ways south-central Idaho’s dairy industry can grow, diversify and make its products more attractive to consumers.

The Magic Valley dairy industry is huge, with nearly half a million cows, but it’s primarily known for cheese and powdered products. Nelson sees opportunities for new marketing strategies. Is there a way to reinvent the gallon milk jug, or create new packaging that helps dairy sales? The food innovation center would help entrepreneurs come up with answers to those questions.

“I think consumers are asking for new things every day,” Nelson said. “Without innovation, we really don’t have new products.”

McCurdy emphasized the job growth potential of the food innovation center and business incubator. If this space helps mom and pop shops innovate, develop new ideas and hire a few more people, that improves the region’s quality of life, he said. He added that more job options will help keep Magic Valley kids from moving away after college, too.

Diversification of the Magic Valley’s agriculture industry could be beneficial, too. For instance, the Magic Valley dairy processors primarily produce cheddar and different milk-based powders. And adding new non-dairy products, made out of staple Magic Valley crops, could help the region as well.

“More outlets for what (farmers) can produce is great,” University of Idaho College of Ag Director of Development and Capital Projects Analyst Jim Miller said. “Developing a new type of food out of a current product — that’s a good way to increase the producer’s outlets.”

The food innovation center and business incubator would simply fill a lot of the Magic Valley’s needs, Stopher said.

“Hamdi (Ulukaya) from Chobani said that we are the Silicon Valley of food,” she said. “And I believe that to be true, but for us to actualize that we have to have innovation.”

Editor's note: This story has been updated to include more information about the groups that funded the feasibility study.

BUHL — The Magic Valley dairy industry has gone through brutal lows and record highs during the COVID-19 pandemic.

Guess what Chobani's making now (Hint: It's not yogurt)

The Greek yogurt giant is continuing its expansion outside of the yogurt aisle.

Meat and Potato Company is a new Twin Falls business with an honest name. The idea, as the name suggests, is simple: Customers can buy local, restaurant-grade meats and potatoes online.

Lincoln County residents will soon have to travel outside of the county for all in-person banking needs.

Chobani will host its first virtual job fair from 11 a.m. to 1 p.m. Tuesday.

A feasibility study has narrowed down the potential locations for a food innovation center in the Magic Valley.

Chobani CEO Hamdi Ulukaya listens to Twin Falls Mayor Shawn Barigar speak in 2016 in Twin Falls. A proposed food innovation center and business incubator would give entrepreneurs access to equipment to test their ideas and capital to bring their new products to the marketplace.