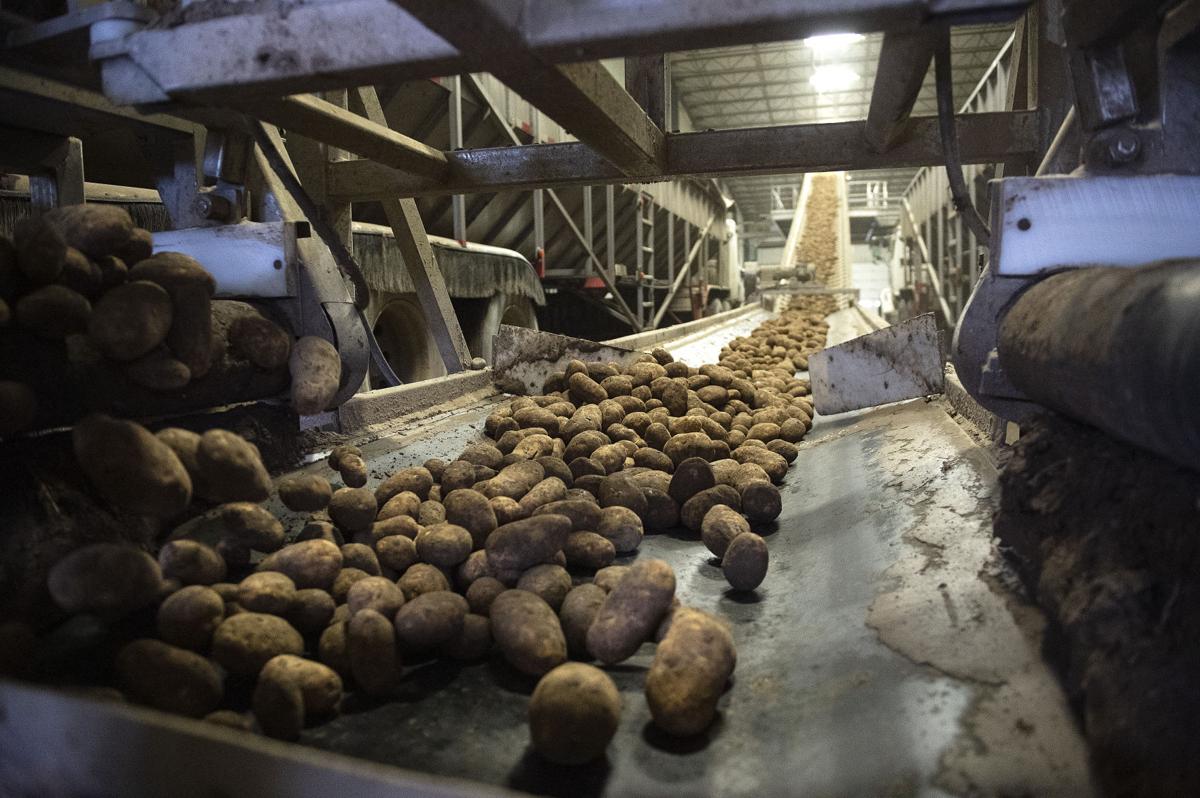 Potatoes go up a conveyor to be graded during a 2019 tour of Mart Produce in Rupert. The Idaho potato industry did well overall in 2020, but it wasn't smooth sailing. 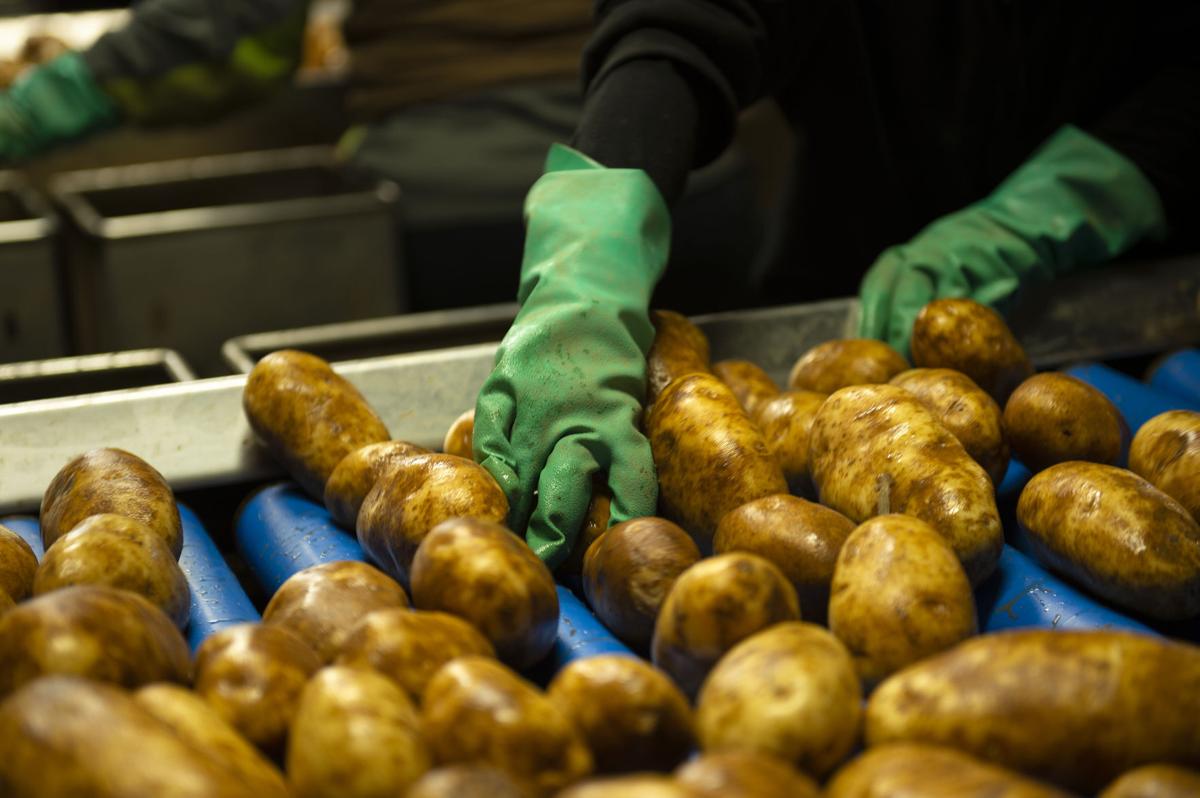 Employees pull potatoes that don't meet their standards in 2019 at Mart Produce in Rupert.

TWIN FALLS — The Idaho potato industry ended up doing well in 2020, despite the pandemic.

The industry set an all-time record for cash receipts according to University of Idaho economists. Potatoes brought in $1.08 billion in 2020, a 13% increase compared to the year before.

But those record revenues came with a lot of stress and didn’t benefit everyone equally. At different times of the year certain sectors within the potato industry flourished while others saw demand for their products grind to a halt. Many processors temporarily stopped buying potatoes or shut down entirely. Packing sheds, which had plenty of potatoes, had to come up with new ways to keep spuds on grocery store shelves. Struggling farmers received millions of dollars in COVID-19 aid from the federal government both in direct payments and food box purchases.

Potato farmers had high hopes at the start of 2020. Then the pandemic dashed those high hopes. And right when some growers were experiencing the bleakest days of their farming lives, a summertime craving for fast food fries brought back demand to something approaching normal.

In the end, it was a roller coaster year that ended up being a net positive for most Magic Valley potato producers.

In 2019, many Idaho spud farmers were once again getting disappointingly low prices for their potatoes. For several years in a row farmers had grown too many spuds. There was an oversupply, but demand hadn’t budged, so prices stayed persistently low.

But bad weather ended up being a blessing for some.

The spring of 2019 was cold, plus a freeze during the fall harvest damaged a significant chunk of the year’s crop. Those weather conditions decreased production.

In agriculture, one farmer’s bad luck is often another’s profit, so while some growers — in eastern Idaho for instance — were hurt by the bad weather, the ones who got their potatoes out of the ground undamaged reaped the rewards brought by undersupply. For the first time in a while, many Magic Valley growers were excited about the value of their potatoes.

“It was the strongest grower return we’ve seen since I’ve been growing spuds — for 49 years,” Hardy said. “We had enough potatoes to get us through the year, returns were really good and it looked like clear sailing.”

Not every Magic Valley potato farmer necessarily benefited from those higher prices.

Hardy is part of the Sun Valley Potatoes co-op in Paul, which sells about 80% of its fresh potatoes to the food service industry (restaurants) and the rest to grocery stores. But Hardy estimates about 75% of growers in the region sell their potatoes to processing plants like McCain Foods or Lamb Weston. Those farmers typically sign contracts that lock in their prices.

For farmers selling their potatoes on the fresh market — the kinds of potatoes that go to grocery stores and restaurants — prices in early 2020 had risen more than 50% compared to the year before, from the $7 range per hundred pounds to the $12 range.

When the pandemic first began wreaking havoc in the U.S., Sun Valley potatoes was doing OK.

But then in May the restaurants shut down completely.

Roughly half of Idaho’s potatoes end up as french fries. The Magic Valley’s home to a handful of processing plants, so the percentage is even higher here.

Americans do most of their french fry eating in restaurants. So when pandemic lockdowns began and restaurants closed, demand for fries shriveled up.

French fry processors filled their warehouses, but no one was buying. Processing either slowed to a trickle or, for some companies in the Magic Valley, stopped entirely.

Even contracted growers, farmers who had assumed they’d be paid for their potatoes no matter what, found processors invoking the act-of-God clauses in contracts and literally returning spuds.

The outlook was dire for processors and their growers. The grocery store side of the potato industry was booming, though.

People still had to eat, even if they couldn’t do it in restaurants. Consumers flocked to grocery stores, and when they did, they bought potatoes. Lots of potatoes.

“Potatoes seemed to be the first thing that came to mind, because they store well, they’re versatile — you can make just about anything out of them — and so consequently the supermarket shelves emptied out in a hurry,” Hardy said.

At one point grocery stores ran out of potatoes. On the surface, that seemed strange. There wasn’t a shortage of spuds, and many growers had extra potatoes because of the lack of food service demand.

You’d think it’d be simple to reroute potatoes intended for restaurants toward grocery stores. But it isn’t. Restaurants and processors buy bigger spuds, which make for longer french fries. Grocery stores aren’t used to those massive taters. And people usually want to buy a small bag at the grocery store. So packing sheds had to either package their spuds differently or find grocery stores willing to take on different sizes and quantities of spuds.

“We were having a hard time converting,” said Oakley farmer Ryan Cranney, who sells to both processors and the fresh market. “You usually don’t buy 50 pounds at a time at the grocery store.”

Even with the uptick in grocery store demand, farmers still had millions of pounds of potatoes that they thought they’d have to either throw away or turn into cattle feed.

So some, like Cranney, decided to donate them. In April, Cranney put a massive pile of spuds in a field, posted a picture of it on Facebook, and told people to help themselves. The post blew up. Hundreds of people from all around the country drove to Oakley to fill up their cars and trucks. National media outlets did stories on Cranney’s spud pile.

Cranney estimates he donated about 30,000 100-pound sacks of potatoes. He expects those spuds helped feed thousands of families.

“As I did the math, it really started to blow my mind a bit,” he said.

The whole donation experience was incredibly positive, Cranney said. He made new friends with people from all over the country and the world.

“Everybody was down and depressed and gloomy, and this brought a sense of something good to people,” Cranney said. “It just kind of gave people hope that there are good things in the world still.”

“When fast food came back, it came back with a vengeance,” Hardy said.

Processors who had returned potatoes to growers just a few weeks ago turned around and called the growers up, asking if they still had their spuds.

For the most part, farmers still did. Cranney said he was mainly out of potatoes at that point, but the donations didn’t end up causing him any significant financial hardship. The amount that people took from the pile might have fed thousands of people, but it was still a small portion of Cranney’s crop.

The fast food boom helped prices rebound. They didn’t climb back to the winter $12 highs but they were still strong, at around $8.50, Hardy said. He explained that the 2019 crop, on average, fetched about $10 per hundred-pound sack. That’s still an excellent year.

University of Idaho Extension Agriculture Economist Ben Eborn said it’s difficult to predict what 2021 will bring for the industry. He noted that demand should be up, but processors are being conservative at the moment.

There are several positive signs for the potato industry. For one, commodity prices are up for wheat, corn, beans, sugar beets and alfalfa. Some farmers who might have grown potatoes will probably set aside some of their acreage for those crops.

But Hardy and Cranney said they’re a bit worried.

Sun Valley Potatoes is having its growers cut back production 10% this year. Hardy said the co-op is telling its growers it doesn’t know how emphatically food service demand will come back in 2021, if it ever comes all the way back.

And prices are back down closer to where they were before the bad weather year in 2019, in the $6-dollar range.

Spud prices are in the cellar: Experts say too many farmers are growing potatoes

Eborn said he sees some signs that farmers might grow too many potatoes in 2021, which would lead to oversupply and lower prices.

“The truth is, with all the government payments farmers received over the last year, I kind of think they’re feeling they were more profitable than they were in reality,” he said. “And when they feel like that, they always overproduce, especially potato farmers.”

“It really is pretty amazing how quickly the potato — and dairy — industry recovered,” Eborn said. “It’s a big sector in the state and in the country, but it’s pretty nimble still.”

The Times-News reached out to Eagle Eye Produce, McCain Foods, Lamb Weston and Idahoan Foods but did not hear back from any of them in time for this story.

How to have financial flexibility

How to have financial flexibility

New job? The right thing to do with your 401k

New job? The right thing to do with your 401k

Magic Valley farmers could have a better-than-average earnings this year.

Did the pandemic play a role in Idaho bean acres being up 38% this year?

People have been eating a lot more beans during the pandemic, but that's probably not the reason prices and acreage are up so much this year.

The Magic Valley's coldest business can hold a lot of frozen fries.

About 50 farmers showed up at the 270,000-sack cellar Friday in Jerome to get a look at the new kind of potato storage.

Other Magic Valley ag sectors have gone through historically bleak stretches during the pandemic. But for many in aquaculture, there hasn't been any relief.

A company wants to build more potato cellars. But neighbors say the ones there weren't built correctly.

A representative with Eagle Eye Produce withdrew the company's application for a conditional use permit to build two new potato cellars during this week's Planning and Zoning Commission meeting.

Potatoes go up a conveyor to be graded during a 2019 tour of Mart Produce in Rupert. The Idaho potato industry did well overall in 2020, but it wasn't smooth sailing.

Employees pull potatoes that don't meet their standards in 2019 at Mart Produce in Rupert. 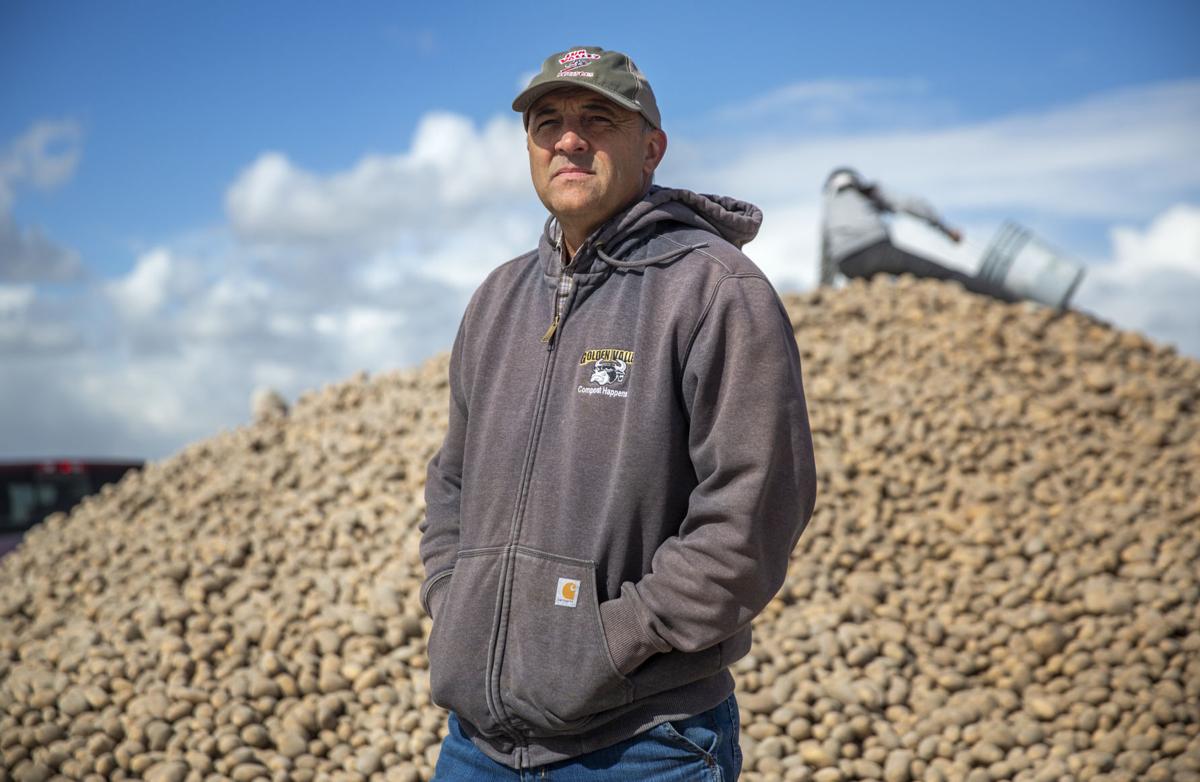 Ryan Cranney poses for a portrait in April next to a mound of potatoes he's made free to the public. Cranney says the coronavirus has decimated restaurant sales, leading to a shortage of buyers for spuds and forcing him to dump 500,000 pounds of potatoes. 'A lot of people that are coming here haven't been coming for themselves,' he says. 'They're grabbing them for people in need.' 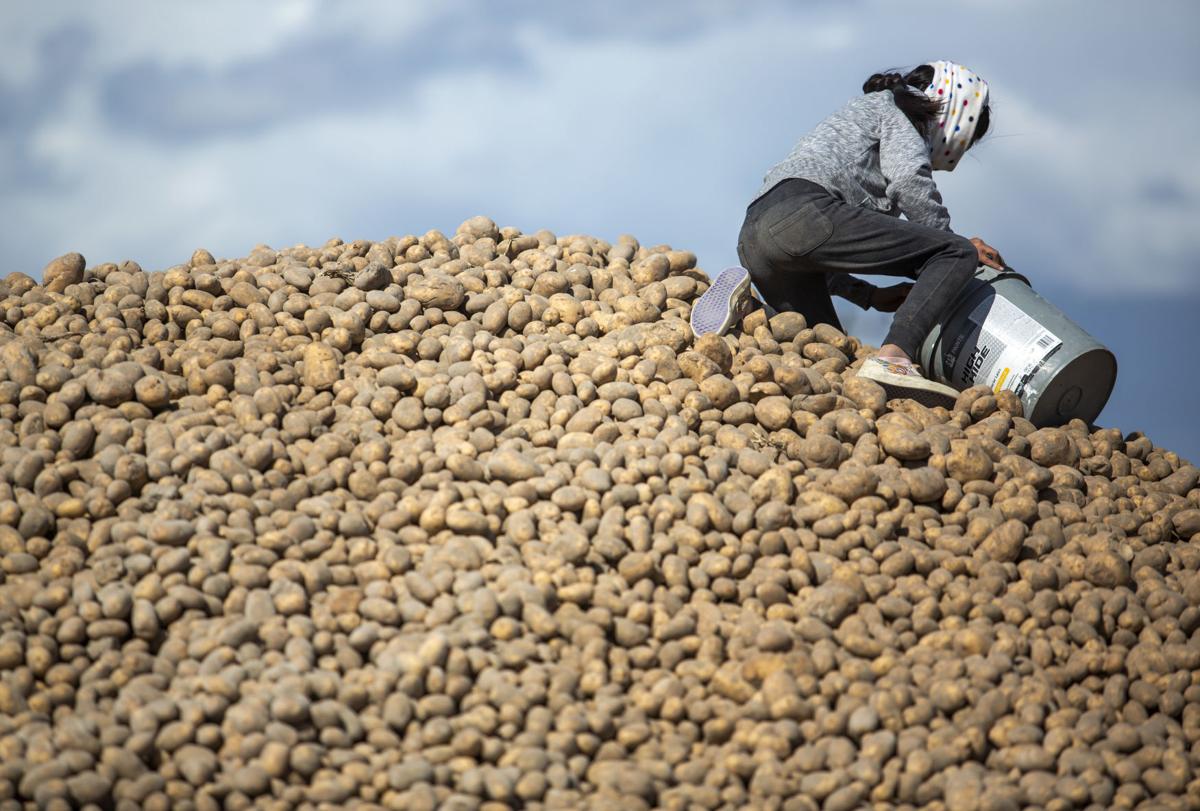 A child scoops potatoes into a bucket to take home with her in April at Ryan Cranney's farm in Oakley. 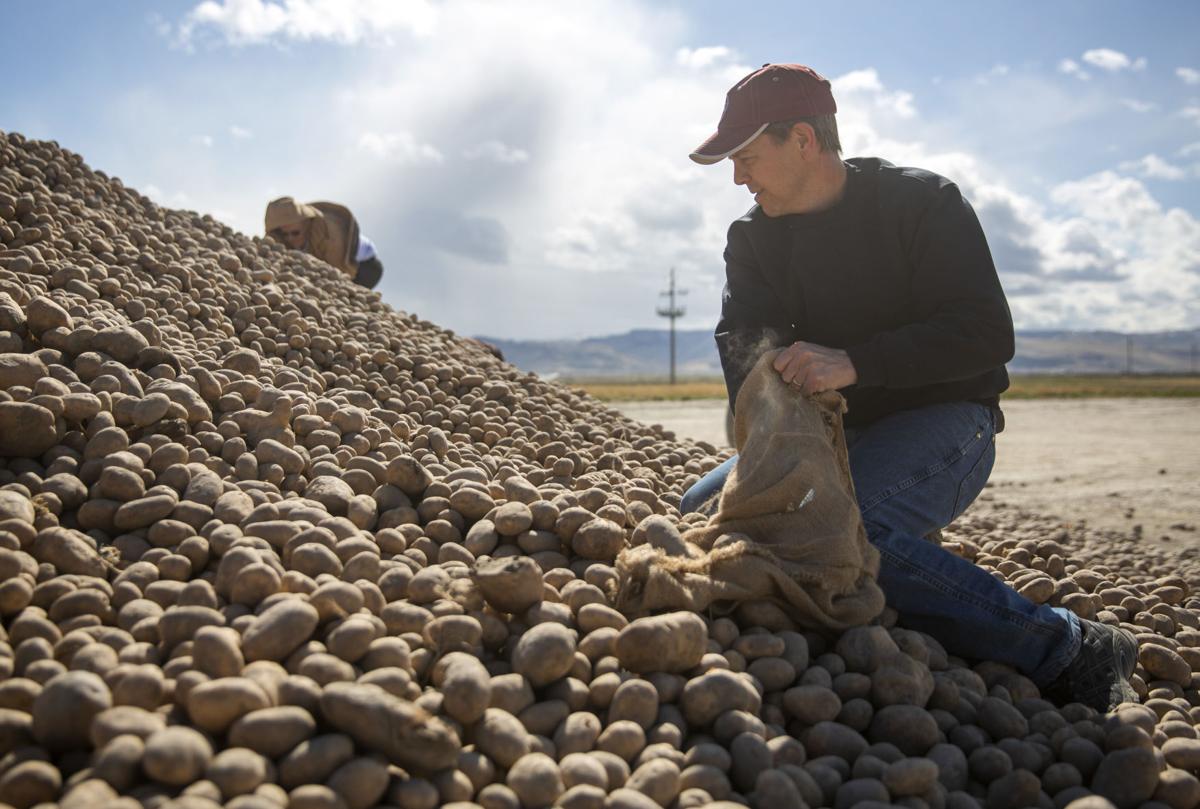 Joe Jaques, of Kimberly, fills a burlap sack with potatoes in April at Ryan Cranney's farm in Oakley. Restaurant closures left Cranney with nowhere to sell his potatoes, so he donated half a million pounds of them. Hundreds of people, from miles around, filled up their vehicles with the spuds.