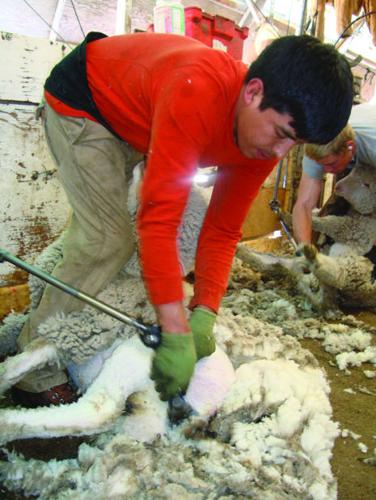 Laborers are seen shearing some of Henry Etcheverry’s sheep. 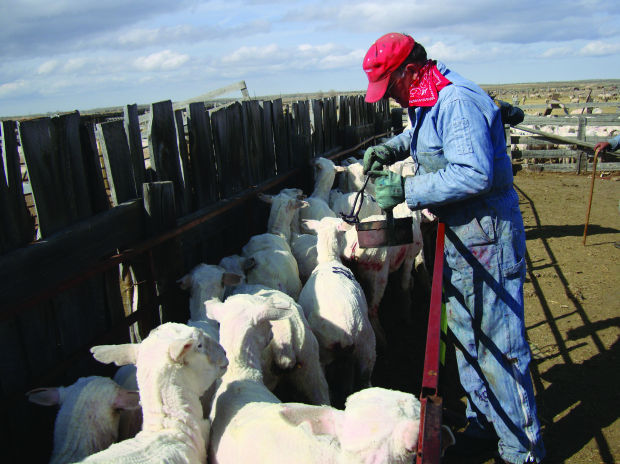 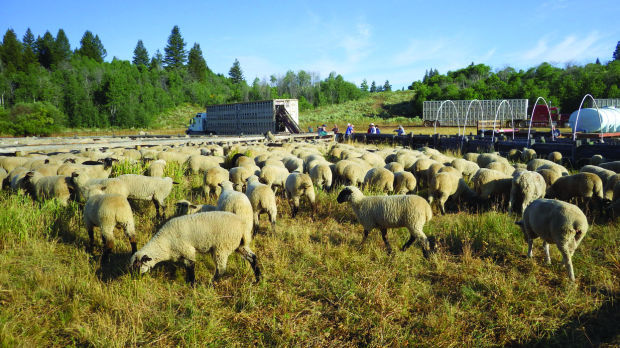 Henry Etcheverry’s sheep are held in a corral before being loaded onto trucks headed for market.

RUPERT • Henry Etcheverry is a busy guy in early August, when he’s shipping lambs to market. In a matter of a few weeks, he’s got to drive seven bands of sheep to three sheep corrals scattered throughout the mountains of southeast Idaho.

He said he likes how his lambs look on shipping day in the Port Neuf Mountains. “I think they look well. I’m pleased,” Etcheverry said.

How big are they? “I don’t want to guess. I’m superstitious. I’ll tell you in about two hours.”

Etcheverry is proud to be one of the last Basque sheep ranchers still operating in Idaho. He’s proud of his heritage, proud to be growing a sheep business that his father, Jean Pierre, started from scratch.

“I’m very proud of their hard work and heritage,” he said. “Men like my dad. These people who had a gleam in their eye: ‘I’m going to do better, I’m going to make something of this. I can do it.’ They’re driven people. And that’s what I think America was made of.”

Etcheverry’s work ethic runs deep, but he’s also a creative 21st-century businessman, being a large supplier of quality wool to Pendleton and selling his lamb through Mountain States Co-op. Both suppliers pay a premium price for Etcheverry’s quality wool and lamb.

“It has been a very good vehicle to market sheep,” Etcheverry said. “I’m proud of our animals, and I believe in getting paid f

or what you’ve got. If you’ve got good animals, you should be rewarded.”

Under the arrangement with Mountain States, Etcheverry has to pay the costs of feeding the lambs in feed yards until they’re slaughtered. “A lot of guys who are shipping get their check today,” he said. “I have to wait for maybe a month to get my checks, but my checks are a hell of a lot bigger. I put more money into them because I put on another 30 to 40 pounds. But It’s been a great deal.”

Mountain States has two brands offered in grocery stores and on the web called Shepherd’s Pride and Cedar Springs.

The lamb sold through Mountain States is raised

by sheep ranchers in the High Plains and Mountain West. The co-op was started by Wyoming sheep ranchers as a way to fetch better prices for their lambs. Several multinational companies who control a large part of the meat market typically pay rock-bottom prices for lamb, while charging high premiums for the product.

“We were at the mercy of a few people,” he noted. “They thought there was a better way. It was a high-risk deal, and it cost quite a bit of money to get in. But it’s worked. It’s really worked, much to the chagrin of many, because they wanted us to fail.”

Etcheverry has been supplying wool to Pendleton for many years.

“I’m one of the largest suppliers of pendleton wool, domestic,” he said. “I felt I could do something more for my wool. All of the pennies add up at the end of the year. Pendleton is very particular. But what the hell, you’ve got to take it off anyway, you might as well do it right. Keep it clean.”

Etcheverry’s Columbia Rambouillet ewes produce the wool that’s sold to Pendleton. He sells about 80,000 pounds of wool to them on an annual basis.

“Henry is the consummate sheep man, taking all into account, the animals, the men, the land and his family to operate one of the largest sheep ranches in Idaho. Pendleton depends on this kind of quality wool for its iconic fabrics, made in the USA,” said Dan Gutzman, wool buyer for Pendleton.

“It’s a medium-grade wool,” he said. “It’s not fine fine, and it’s not course. Fine fine goes into a suit, or a ladies garment. My wool probably goes into shirts and what not.”

Etcheverry said he takes extra care to make sure the wool he sells to Pendleton is clean of debris. “Plastic is a terrific sin if you get that in the wool. It doesn’t comb. It gets into the fabric, and it’s a mess. You’ve got to be vigilant and watch out. You’re assuming responsibility for what you’re selling. I’m not trying to bury it with someone else’s wool, I like that, because I’m accountable.”

Etcheverry operates out of a base ranch north of Rupert, near the edge of the Minidoka desert. He winters his sheep at the Rupert ranch, trails the ewes and lambs through the desert in the spring, and then trucks them to the summer range in the Port Neuf Mountains and other locations in southeast Idaho. He has a summer home base in Lava Hot Springs. He employs about 20 people in the winter and 10 in the summer.

“Where the feed is, there’s no better anywhere,” he said. “We had lambs yesterday that were weighing 150 and one quarter,” noting that is a very good number compared to the competition.

“The feed has a lot of strength, and you’ve got a lot of variety.”

Etcheverry’s herders run the sheep over the countryside one time and move on. “Once over lightly is our philosophy. There’s so much forage left in some places you can’t tell that we’ve even been there.”

John Huarte, a Basque businessman from California, has been tagging along with Etcheverry as he works on shipping lambs to the market.

“It’s very interesting for me,” Huarte says. “My father was Basque and farmed citrus in California. In memory of my dad, I wanted to come here and associate with some Basque people in this country. It’s great fun to be here and watch the celebration of shipping. It’s kind of a harvest of sorts. Lots of friends come here, other farmers and ranchers — kind of social deal — but they help out each other, and you need a lot of hands to move all these sheep.”

Huarte met Etcheverry at the Basque Museum several years ago. Huarte was the guest speaker. It turns out that Huarte played quarterback for Notre Dame and won the Heisman Trophy in 1964.

“That was a wonderful honor,” he said. “And then I was in pro football for 10 years, mostly a backup career. But there I acquired the money to start Arizona Tile, which has turned into quite a large granite and marble and ceramic distribution company with 25 branches in the seven western states.”

“Most of the Basques that I know are pretty high energy — proud of their heritage and real good workers!”

In a matter of a few hours, Etcheverry and his helpers fill the sheep trucks with lambs, and move on to the next task, branding and worming. Henry’s daughter, Dominique gives them shots to prevent worms. She helps her dad at all of the lamb-shipping locations in August, separating the lambs and ewes when they load the trucks, and then move on to the next task, culling, branding and worming the ewes.

She also runs a graphic design business where she lives in Star.

“Being able to help my parents on the ranch is when I feel most myself — wearing my work boots and doing physical work side-by-side with my dad,” Dominique Etcheverry said. “Working with the sheep reinforces my love of the business, the outdoors and our family’s heritage. It’s really an honor to be involved.”

At the end of the day, it’s rewarding for Etcheverry to get all of this work done. “Today, if these lambs weigh well, what more reward or gratifying is that? It’s what I’m trying to accomplish and achieve,” he said. “And when we achieve it, it makes you feel good. Because you had to work dang hard to get there. You don’t make good lambs just by showing up. You’ve got to work at it every day.”

Steve Stuebner is the writer and producer of Life on the Range, an educational project sponsored by the Idaho Rangeland Resource Commission. See more at www.lifeontherange.org.

A farmer for life

How inflation is impacting the way people spend their money

Major credit card mistakes to avoid when times are tough

Major credit card mistakes to avoid when times are tough

US economy shrinks for a second quarter, fuelling recession fears

US economy shrinks for a second quarter, fuelling recession fears

Laborers are seen shearing some of Henry Etcheverry’s sheep.

Henry Etcheverry’s sheep are held in a corral before being loaded onto trucks headed for market.