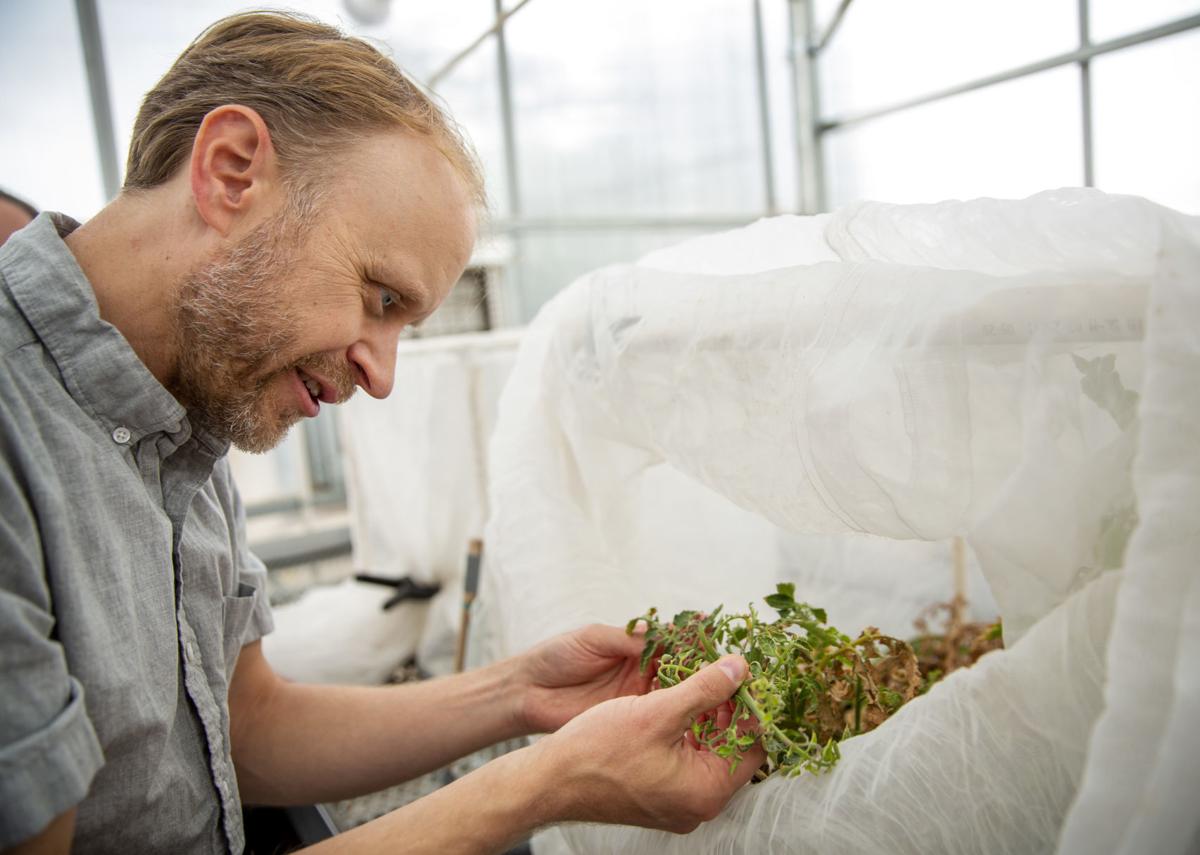 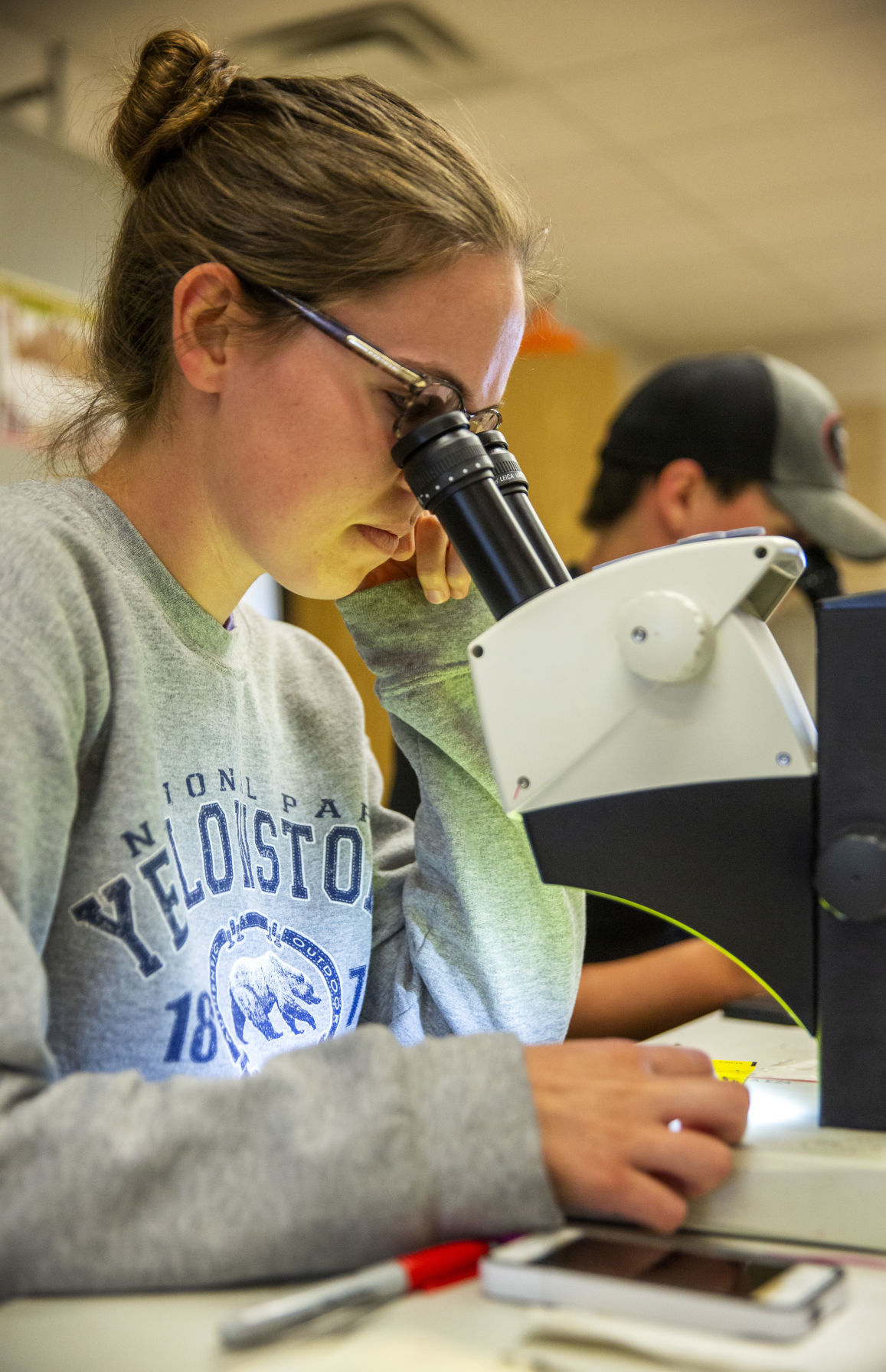 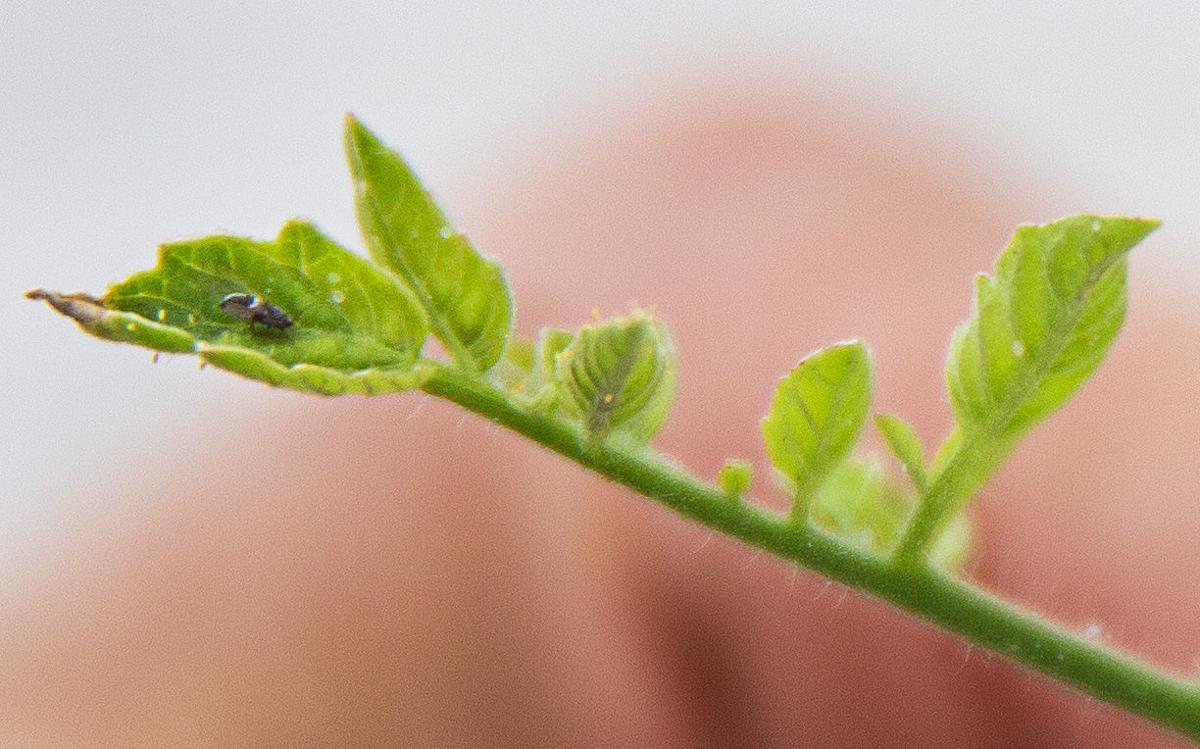 A potato psyllid hangs out on the leaf of a plant Aug. 7, at the University of Idaho Kimberly Research and Extension Center in Kimberly. 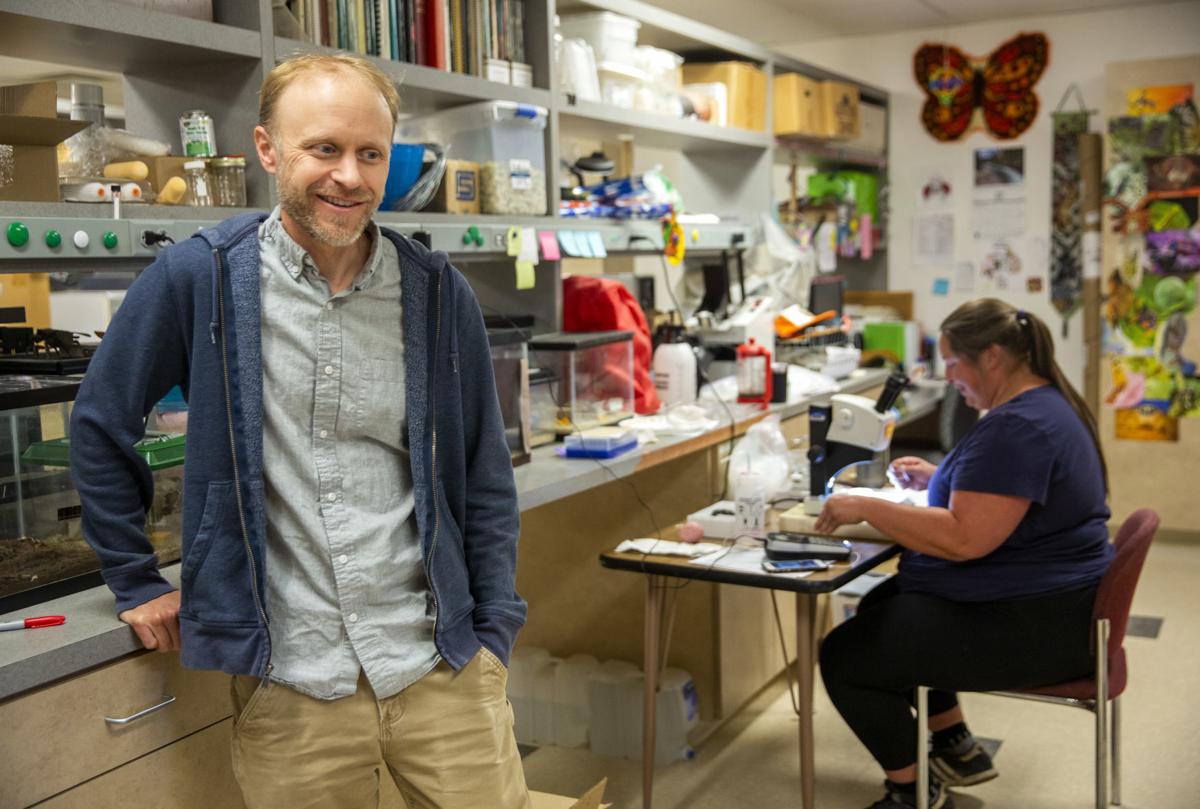 They’re looking for a particular pest as they work their way through these fly-paper covered cards, an insect that can damage potato crops. Steiner and Mangum are hunting for a needle in a haystack: the tell-tale, white abdomen stripe of a potato psyllid.

“You hate the color yellow after a while,” Mangum said.

They find fewer than one of the cicada-like insects per card. The potato psyllids are like pinhead-sized Waldos hidden among hundreds of flies, lady beetles and thrips. The work is made harder because most of the insects have been squished into the card in transit.

These insects are an annual pest for farmers because they can carry liberibacter, the bacterium that causes zebra chip disease in spuds. Infected potatoes can’t be sold, and spraying for potato psyllids increases growing costs.

University of Idaho Associate Professor of Entomology Erik Wenninger and his lab are monitoring the pests in fields throughout southern Idaho and studying them at U of I’s Research and Extension Center in Kimberly in order to improve potato psyllid defense strategies. In July, the lab found liberibacter-positive psyllids in two fields in Twin Falls County.

For much of the growing season every summer, the team pores over more than 320 sticky traps a week, collected from 83 potato fields, and sends every psyllid it finds to Moscow for liberibacter testing.

Wenninger said that, while he’s learned a lot about psyllids, they’re a tricky pest to combat.

“So far we haven’t found any sort of smoking gun in terms of what is the source of potato psyllids,” he said.

To stop a pest

Wenninger and his team have been studying potato psyllids since 2012, just a year after liberibacter-infected potato psyllids showed up in Idaho and began spreading zebra chip in Gem State fields.

There are a few prongs to Wenninger’s lab’s research. In addition to monitoring fields for potato psyllid abundance and liberibacter presence through the growing season, Wenninger and his team are striving to figure out the best way to spray for the pests.

The team raises potato psyllids on greenhouse spuds, then exposes healthy plants to the infected insects. From there, Wenninger and his team try different methods and strategies for potato psyllid-cide.

In some ways, studying potato psyllids is more difficult than working with better-known pests such as potato beetles, wireworms and aphids. Wenninger said he has struggled to find the sweet spot when infecting potatoes. It’s hard to pinpoint the ideal number of infected psyllids to put on a plant for research purposes.

It has also been a challenge for Wenninger to figure out the best time of year to spray for the pests.

“That’s what growers really want,” Wenninger said. “To know what works to kill this, and when do I spray it?”

The insects look like mini cicadas. Their large, translucent wings are each the size of their whole torso and extend backward beyond their abdomens. They’re only pests on potatoes, crop-wise, but live on other host plants, too. Wenninger is also studying host plant usage in order to better understand how to manage the species.

During the summer, potato psyllids live about three weeks, but adults survive through the winter.

“If you’re an adult really late in the season you could live six months, and just be chilling out on a host plant, waiting for it to warm up,” Wenninger said.

Zebra chip, which was discovered in the mid-1990s in Mexico, is bad for farmers because it makes potatoes taste funny, although diseased potatoes aren’t dangerous to eat. Wenninger has tried fries and chips made from zebra chip diseased spuds.

“It just tastes like a burnt chip,” he said.

There are a lot of reasons to devise new strategies for preventing zebra chip. For one, spraying for pests is expensive, so refining insecticide application tactics can save farmers money.

It’s not all about helping farmers’ bottom lines though. Spraying for pests negatively impacts beneficial insects, species that actually help farmers. And because insects like potato psyllids reproduce every three weeks, spraying too often can help the species gain new resistance to insecticides.

The fewer farmers spraying “in case,” the better, Wenninger said.

Potato psyllid numbers in Idaho fluctuate from year to year. This year has brought relatively high potato psyllid abundance, but so far the number of liberibacter-infected insects isn’t a cause for worry.

“If we end up getting more bacterium than we’ve seen so far, it could be concerning,” he said.

CropLogic hasn't had a Magic Valley presence for long, but the New Zealand-based company is helping farmers track soil moisture in real-time, which leads to bigger yields.

Spud prices are in the cellar: Experts say too many farmers are growing potatoes

While potato economics are incredibly complex, the low prices have one primary cause: “We have too many people selling the same thing.”

Chobani cut the ribbon Monday on it's $21 million Innovation and Community building in Twin Falls.

Fighting for farmers: Burley man to work in China for Foreign Ag Service

BURLEY — When he was 8, his pig was the Cassia County Fair grand champion. He grew up near Burley and graduated from Declo High School, then r…

About 50 farmers showed up at the 270,000-sack cellar Friday in Jerome to get a look at the new kind of potato storage. 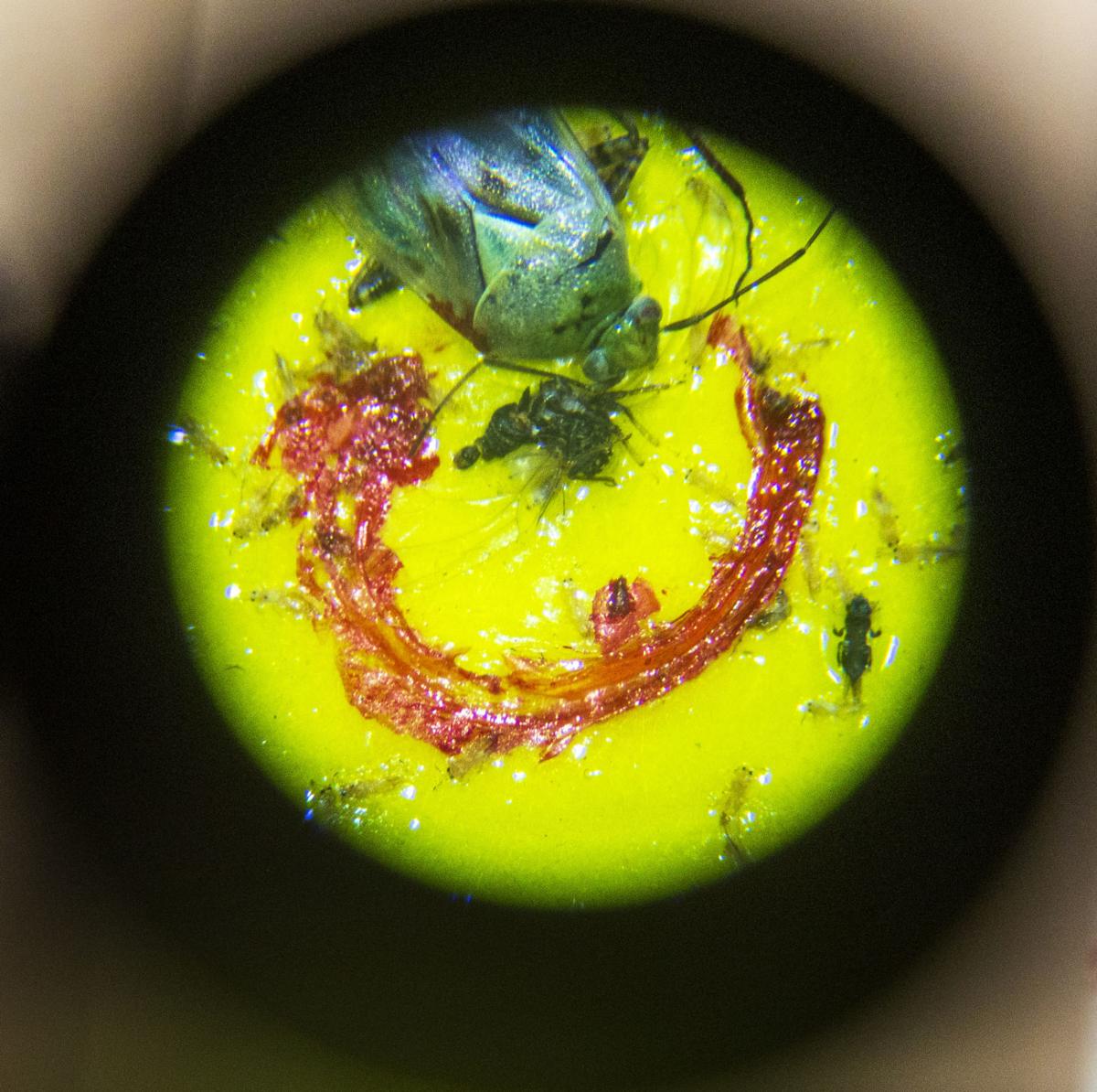 Wenninger's team sorts through hundreds of sticky trap cards every week during the growing season, on the hunt for potato psyllids. Identifying a squished potato psyllid among hundreds of other insects takes patience and a practiced eye.

A potato psyllid hangs out on the leaf of a plant Aug. 7, at the University of Idaho Kimberly Research and Extension Center in Kimberly.