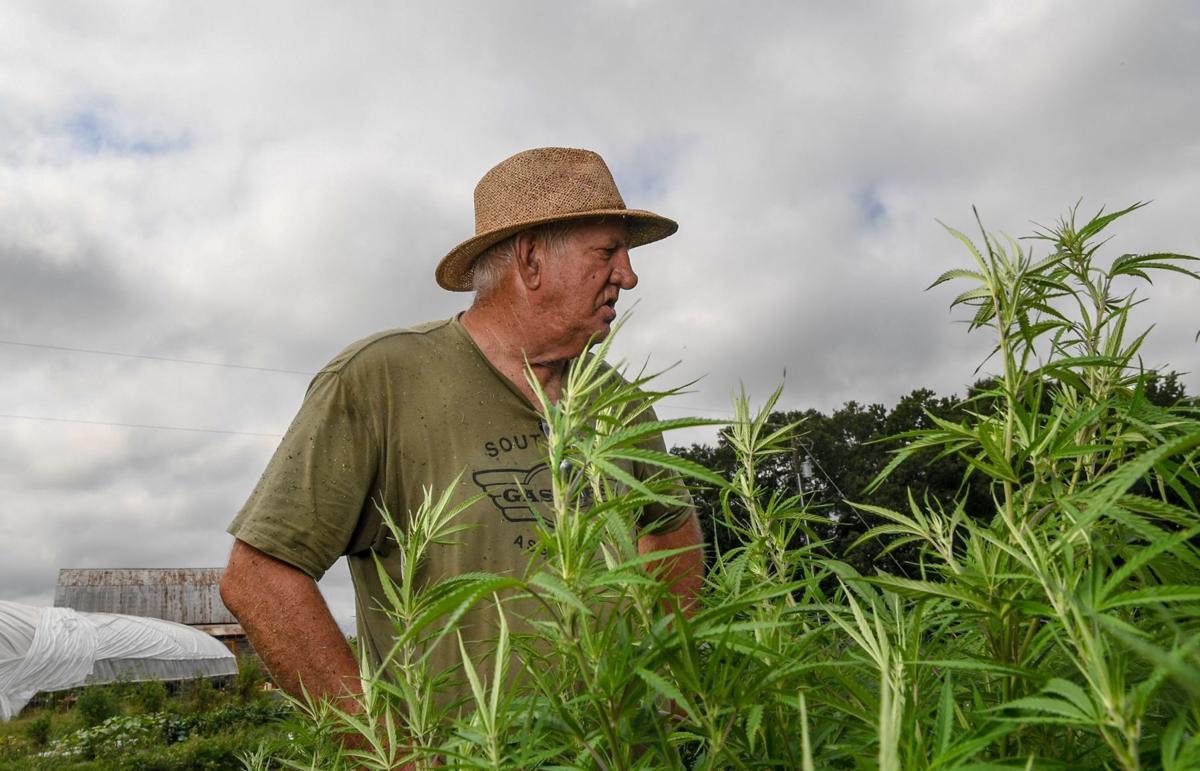 Windrows of hemp stretch for acres in September in an Alberta, Canada field. Hemp production is illegal in Idaho, but legal in 47 states and widespread in Canada.

BUHL — Magic Valley farmer Tim Cornie took a trip to Alberta, Canada, in September. He drove more than 3,000 miles in four days with one specific goal: To learn about hemp from Canadian farmers and researchers.

And he learned a lot.

“I came back thinking (hemp) was a very viable thing for Idaho,” Cornie said.

Cornie, and his cousin Kurt Mason, are farmers and owners of 1,000 Springs Mill, a new food company in Buhl that specializes in organic and non-genetically modified foods. They want to grow hemp essentially like a grain in the Magic Valley and sell the seeds as food.

But Idaho law won’t let them, even though hemp production is legal at the federal level and in 47 states.

While hemp looks like marijuana and smells similar, it contains less than 0.3% THC, the chemical that gives marijuana its psychoactive properties. Marijuana contains up to 30%.

Cornie said he thinks anti-hemp sentiment is driven by misunderstanding, not common sense. If more people knew the differences between the two plants and the advantages of growing hemp, he suspects there’d be less opposition to legalization. He said there’s no reason to take a moral stance against hemp.

“If you’re going to get high on it, you might as well smoke alfalfa,” Cornie said. “That’s the truth. Just roll up alfalfa and smoke it, you’ll get higher off that than you will hemp.”

2020 could be the year Idaho legalizes the versatile crop, which, among many other applications, can be eaten as a protein-rich food, used as a construction material or made into paper.

Rep. Dorothy Moon, R-Stanley, is expected to bring forward a bill that, if passed, would make Idaho the 48th state to allow hemp production.

And if the Legislature legalizes the plant, Cornie and Mason think farmers will be ready to take advantage.

“I think they would start growing it this spring if they could,” Cornie said. “The valley needs another commodity.”

Hemp advocates say the crop has thousands of uses. And as more people try to eat healthier, hemp’s value as a food is increasing.

It’s often called a superfood. The seeds are rich in important unsaturated fats, full of fiber and protein-dense. The oils can be eaten, too, or used to relieve aches and pains — without making users high.

Cornie noted that hemp and marijuana can’t typically coexist in a field, so he doesn’t see how legalizing hemp opens a door for illegal marijuana cultivation. The two plants can’t be grown in the same place, because they’ll pollinate each other and result in useless hybrids.

“There’s no way anyone would plant marijuana in a hemp field,” Mason said.

Even though they’re in the same genus, the practical applications are completely different, and the two plants don’t have much to do with each other, Cornie said.

“I don’t want them to legalize marijuana in Idaho,” he said. “To me, (hemp) is a food and a commodity and that’s it.”

Hemp production has exploded in recent years, but Idaho hasn’t participated in the boom. There are just three states that haven’t legalized hemp in some way: Idaho, South Dakota and Mississippi. Much of the hempseed products sold in grocery stores are grown in Canada, which has been growing hemp since the 1990s.

Mason said he thinks Idaho is missing out by not allowing producers to try their hands at hemp.

“I think it would be awesome,” he said about legalization. “It would give farmers another cash crop to grow.”

Growing hemp for seeds can be lucrative. Mason said a pound of hemp seed can fetch about a dollar, and each acre can muster between 1,500 and 2,000 pounds. When you factor in equipment, water, fertilizer and labor costs, hemp compares favorably with other crops. Plus, the processing of the plant requires adds value.

Idaho farmers wouldn’t need any new equipment to plant or harvest it, except for a drier — once the plant has been cut, the farmer has to get the moisture content down. At $60 an acre to plant, Cornie said hemp is cheaper than corn.

There are other advantages to hemp as a crop. It’s good for soil health, adding nitrogen to farmland. Cornie said it grows fast and tall, takes relatively little water to grow and typically doesn’t require pesticides or herbicides — it can outcompete weeds.

Plus, Cornie said that south-central Idaho’s dry climate and sandy, silt-loam soils would be perfect for hemp.

Attitudes about hemp have changed dramatically in recent years. But Idaho’s softening stance toward could be mostly driven by federal changes.

The 2018 Farm Bill, signed by President Donald Trump, removed hemp from the schedule 1 substances list — heroin, ecstasy and LSD are schedule 1 drugs — allowing for hemp production throughout the country. In October, new federal rules prevented states, such as Idaho, from prohibiting hemp transportation.

But the Farm Bill required each state to create its own hemp rules. Idaho hasn’t yet created those rules, even though hemp legalization bills have appeared before the Legislature each of the past few years. Some politicians have voiced concerns about state law enforcement’s abilities to police marijuana if hemp became legal.

Idaho State Patrol declined to talk to the Times-News about hemp enforcement in Idaho because of an ongoing court case.

Even though Idaho hasn’t yet legalized hemp, there are signs that could change this year. Opposition to legalization isn’t particularly strong.

Rep. Dorothy Moon, R-Stanley, who has supported hemp legalization in the past in addition to putting forth this year’s bill, said she thinks hemp legalization is building momentum, due in part to blessings from Gov. Brad Little and prosecutors throughout the state.

Little has said that his concerns with hemp center around enforcement and transportation issues.

“I am not opposed to a new crop such as hemp,” Little said in November. “We need to be sure the production and shipping of industrial hemp is not a front to smuggle illicit drugs into and around Idaho.”

Sen. Jim Patrick, R-Twin Falls, said he expects the Legislature to pass hemp legislation this session. But he doesn’t think hemp is a miracle crop.

“They say it’s going to save farms, but If you look at the other states it hasn’t because you got to have a market,” Patrick said.

He added that some farmers have grown hemp only to find the yield wasted when they couldn’t find a processor. Cornie and Mason said their business could handle hemp hearts and seeds, but they aren’t aware of any nearby processor that could handle hemp grown for construction materials or oil.

Mason said if hemp were legalized this Legislative session, he’d expect maybe a dozen or so Magic Valley growers to give it a try in 2020. Growers would probably start small, and learn how to grow the crop here. There would be a learning curve as farmers figured out the idiosyncrasies of hemp.

“They’re going to have to do a lot of research,” Mason said.

A new farmworker bill would help Magic Valley farmers find legal workers, and would also give existing workers a path to legal status.

You may have heard that it was a bad year for potatoes, and while stores probably won't run out of french fries, the impact on farmers is more complicated.

We’re the fastest-growing state — again. Could that mean another Idaho voice in Congress?

It's official: A bill that would legalize hemp in Idaho was introduced Tuesday.

Battered, fried, consolidated: Two of America's biggest fish farmers — both operating in the Magic Valley — are now one company.

Windrows of hemp stretch for acres in September in an Alberta, Canada field. Hemp production is illegal in Idaho, but legal in 47 states and widespread in Canada.