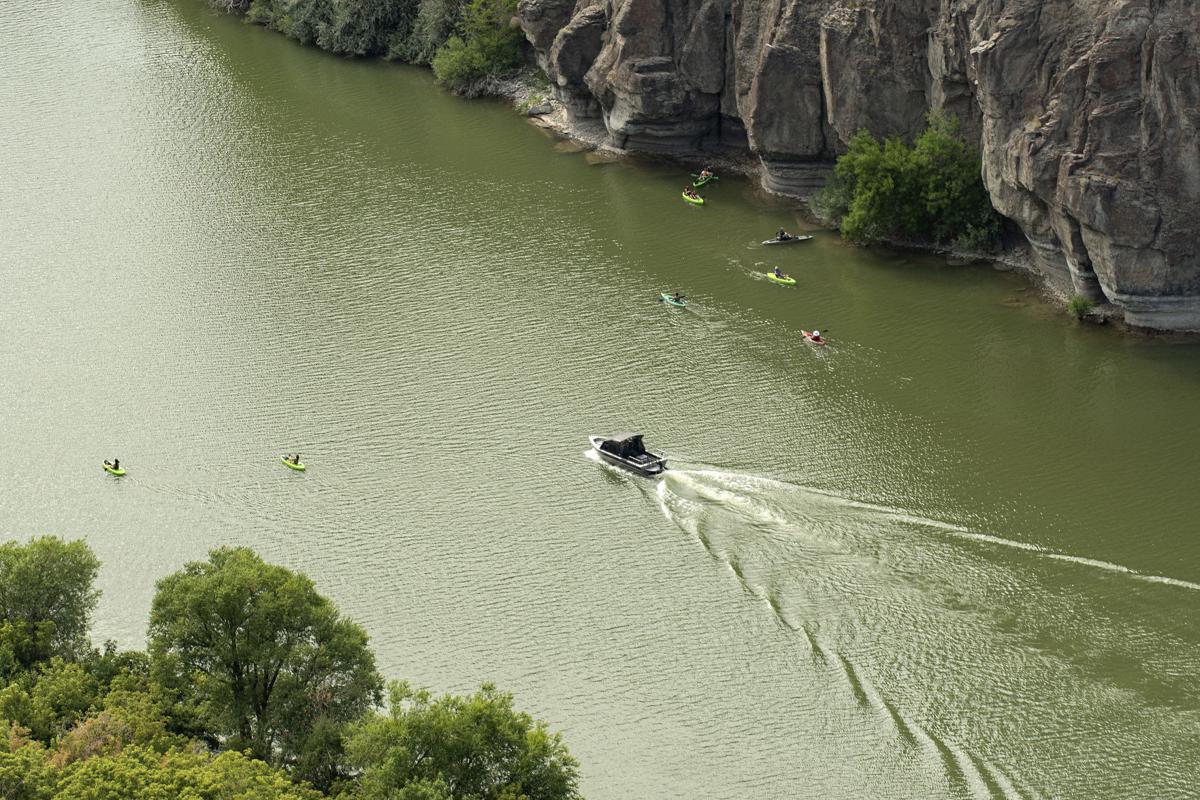 Kayakers and boaters are seen on the Snake River on Thursday in Twin Falls. The Idaho Conservation League says that manure management practices have to improve in order to reduce Magic Valley water pollution. 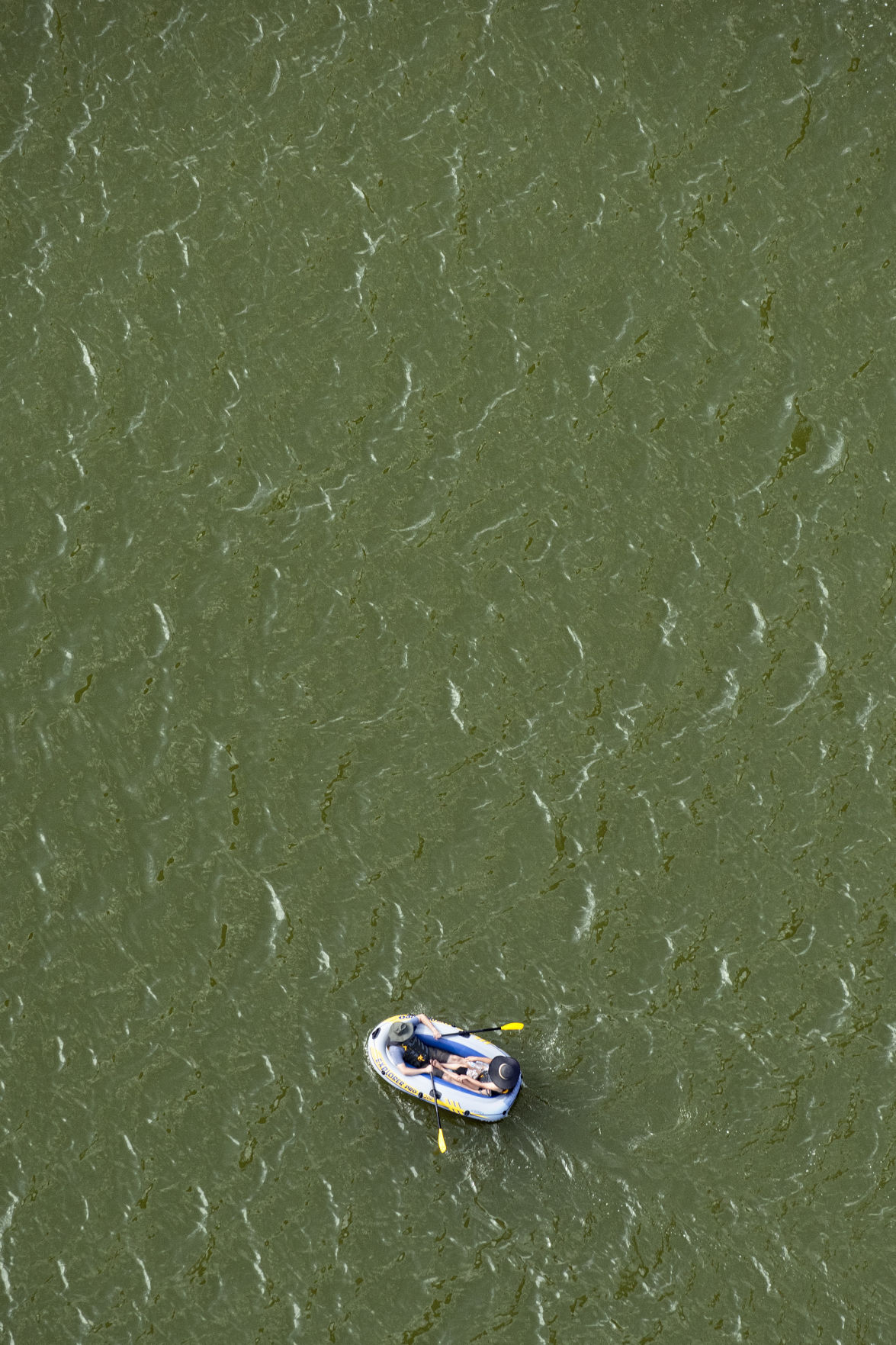 A small raft floats along the Snake River on Thursday in Twin Falls. The Idaho Conservation League says Magic Valley water quality is getting worse because too much manure from dairies is being applied to farmland.

TWIN FALLS — Magic Valley groundwater is getting worse and excessive fertilizer use is to blame, according to the Idaho Conservation League.

Extra nutrients in water might not sound like a big deal. But they can lead to excessive plant growth — toxic algal blooms for instance, which can kill fish and make swimmers sick. High nitrate levels in drinking water could also lead to negative health effects for people who drink that water decade after decade.

The conservation group’s report says manure from dairy cows is responsible for the Magic Valley’s groundwater pollution. Most of the region’s dairy manure ends up being spread on agricultural fields as fertilizer.

“As long as there are 425,000 dairy cows here there’s going to be 50 million pounds of dairy waste a day and we’re going to have to figure out something to do with that,” Johnson said. “It’s not all on the dairy industry, but at least some of it is.”

In the past few decades the Magic Valley has become one of America’s biggest dairy producing regions. Idaho is now the country’s third-biggest dairy state, and 70% of that dairy comes out of south-central Idaho.

Manure is a great fertilizer. But there are a couple of reasons it might not always be applied to land in the right amounts, Johnson said.

First, manure is heavy and bulky. In most cases, dairymen want to apply their manure to nearby farmland, or sell it to someone who owns farmland nearby. When a dairyman has to ship manure farther, he loses money.

Because of that, there are relatively strong incentives to use manure as locally as possible. There might not be as many incentives to apply that manure in the right amounts. In many instances, applying extra fertilizer doesn’t harm crops much, if at all, even if the crops can’t use it up.

The Idaho State Department of Agriculture inspects all dairies to ensure they don’t use too much manure on their own farms. Idaho Dairymen’s Association CEO Rick Naerebout said the state inspects each dairy an average of five times a year to make sure they’re adhering to an approved nutrient management plan. Those plans prevent dairymen who also farm from over-applying manure, Naerebout said.

“There’s no ag industry more regulated than the dairy industry,” he said.

That level of oversight doesn’t exist for non-dairymen, however. If a dairyman sells his manure to a third-party, the third-party doesn’t have the same application restrictions.

Still, Naerebout said he doesn’t agree with the claim that excessive manure use is the definitive cause of high nitrate and phosphorus levels. In general, one cow produces in a year enough manure for one acre of farmland. Naerebout pointed out there are 2.1 million irrigated acres of ag land in the Eastern Snake Plain Aquifer area.

“Clearly there’s enough acreage there to have a balanced nutrient management system,” he said.

The problem with nitrates

The primary issue with excess phosphorus is harmful algal blooms. Nitrates contribute to algal blooms too, but they can also affect people more directly.

Federal drinking water standards set a 10 milligrams per liter cap on nitrate levels. Above that threshold and infants can get sick with blue baby syndrome —if an infant ingests too much nitrate it can have difficulty transporting oxygen throughout its body.

But that 10 milligram standard was set half half a century ago, specifically for blue baby syndrome, Johnson said. There isn’t a huge amount of good information on how long-term nitrate exposure affects adults, but there have been scientific studies that suggest long-term exposure to nitrate levels higher than 2 milligrams per liter can lead to an elevated risk for colorectal cancer, thyroid disease and neurological birth defects.

In a non-agricultural area, a background nitrate level might be 0.05 milligrams per liter, Johnson said. Most parts of the Magic Valley have nitrate levels in the 2 milligram range or higher.

That’s not crazily high, Johnson said — it’s comparable to other agricultural regions throughout the U.S. But because of the Eastern Snake River Plain Aquifer’s geology, any negative effects of high nitrate levels won’t be felt equally throughout the Magic Valley. It depends on how the groundwater flows.

People who get their water from a city as opposed to a private well have some of that nitrate filtered out, but Johnson said levels that high should still be cause for concern.

Naerebout said the report is frustrating because it failed to recognize the Idaho dairy industry’s efforts to protect the environment.

“We feel like we are doing our part to be good stewards of the land,” he said. “We take water quality very seriously.”

The Idaho Dairymen’s Association has invested $2 million toward the Idaho Center for Agriculture Food and the Environment (CAFE). University of Idaho researchers working at the CAFE will be studying new ways to turn manure into sellable products. In the future, there could be manure processing operations on individual dairies that turn cow waste into different types of fertilizer than can be marketed more widely.

Research at the CAFE could make manure more valuable, which might change how it’s used here.

“To be able to have manure be a revenue stream on the dairy is a vision of the industry,” Naerebout said.

Naerebout also emphasized that the Idaho Dairymen’s Association encourages farmers to plant cover crops and till their fields less often. Cover crops and conservation tillage can help reduce the amount of nitrogen and phosphorus that leach into groundwater.

Virtually everyone agrees that increasing the use of cover crops and conservation tillage would help both farmers and the environment. Both of those practices help fight erosion. The main snags are the up-front cost and education.

“If your family’s been farming a certain way for generations it can seem like a big risk, financially and otherwise, to all of the sudden stop tilling your fields every winter,” Johnson said.

Naerebout said it’s also frustrating that the ICL points a finger at dairy when the cause of the nutrient pollution isn’t clear. Groundwater data shows the presence of elevated nitrate and phosphorus levels, but the data doesn’t reveal the source. Synthetic fertilizers and non-dairy manure could be playing a big role, too, Naerebout said.

“Manure is the original organic fertilizer,” he said. “It’s not this scary, negative thing the report makes it out to be.”

There are a few ways to solve the excessive nutrient problem, Johnson said. The state should keep ramping up groundwater monitoring capacity. On top of that, more farmers need to plant cover crops and practice conservation tillage. Plus, the state should establish a singular regulatory agency to monitor manure use more closely and transparently, tracking the fertilizer even when it leaves a dairyman’s land.

“There’s definitely improvements we can make,” Johnson said. “The goal here is to make sure everyone’s accountable.”

Toxins are now at dangerous levels at Mormon Reservoir.

A new plan for cleaning up Twin Falls' groundwater

Most people probably agree groundwater pollution is a serious problem in the Magic Valley.

Dry times: Idaho snowpack below average so far this winter

Idaho is having a drier-than-normal winter, which could cause significant drought conditions in the Magic Valley this summer.

Out of the blue? Aquatic plants threatening color of Blue Heart Springs

The Idaho State Department of Agriculture found a native and an invasive plant at the beautiful spot.

Officials are preparing to remove an invasive plant that is making Blue Heart Springs less blue.

Kayakers and boaters are seen on the Snake River on Thursday in Twin Falls. The Idaho Conservation League says that manure management practices have to improve in order to reduce Magic Valley water pollution.

A small raft floats along the Snake River on Thursday in Twin Falls. The Idaho Conservation League says Magic Valley water quality is getting worse because too much manure from dairies is being applied to farmland.