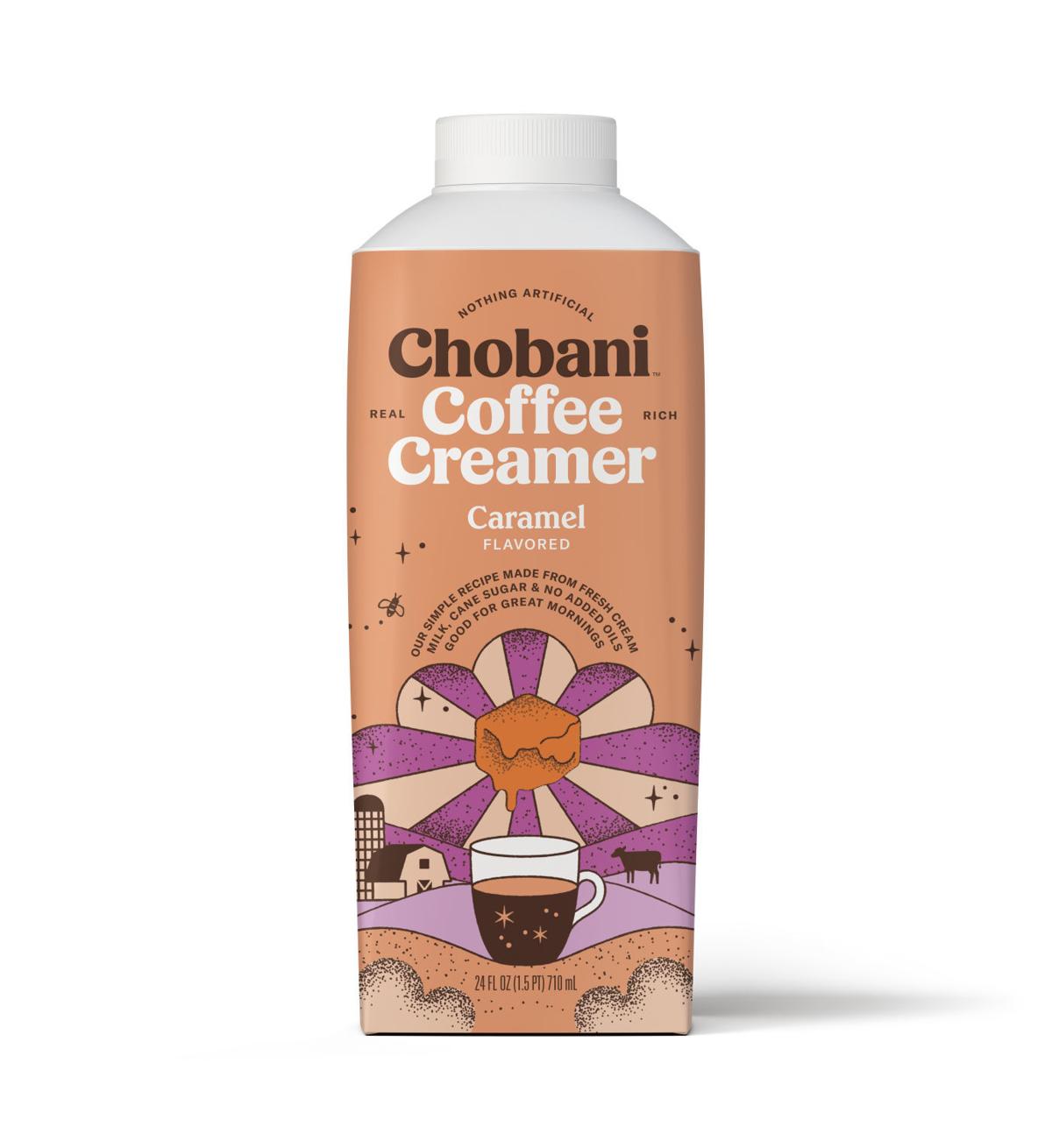 Chobani says its line of creamers is made with natural, simple ingredients, unlike traditional oil-based creamers. 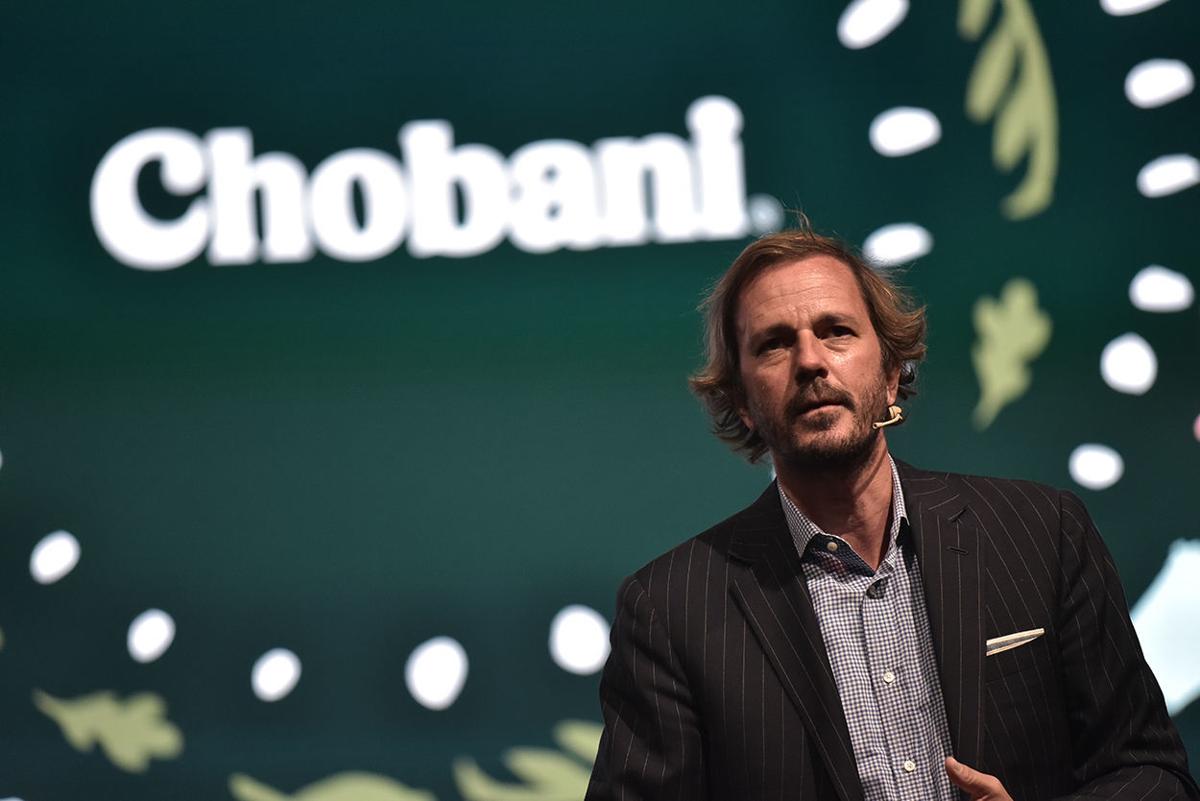 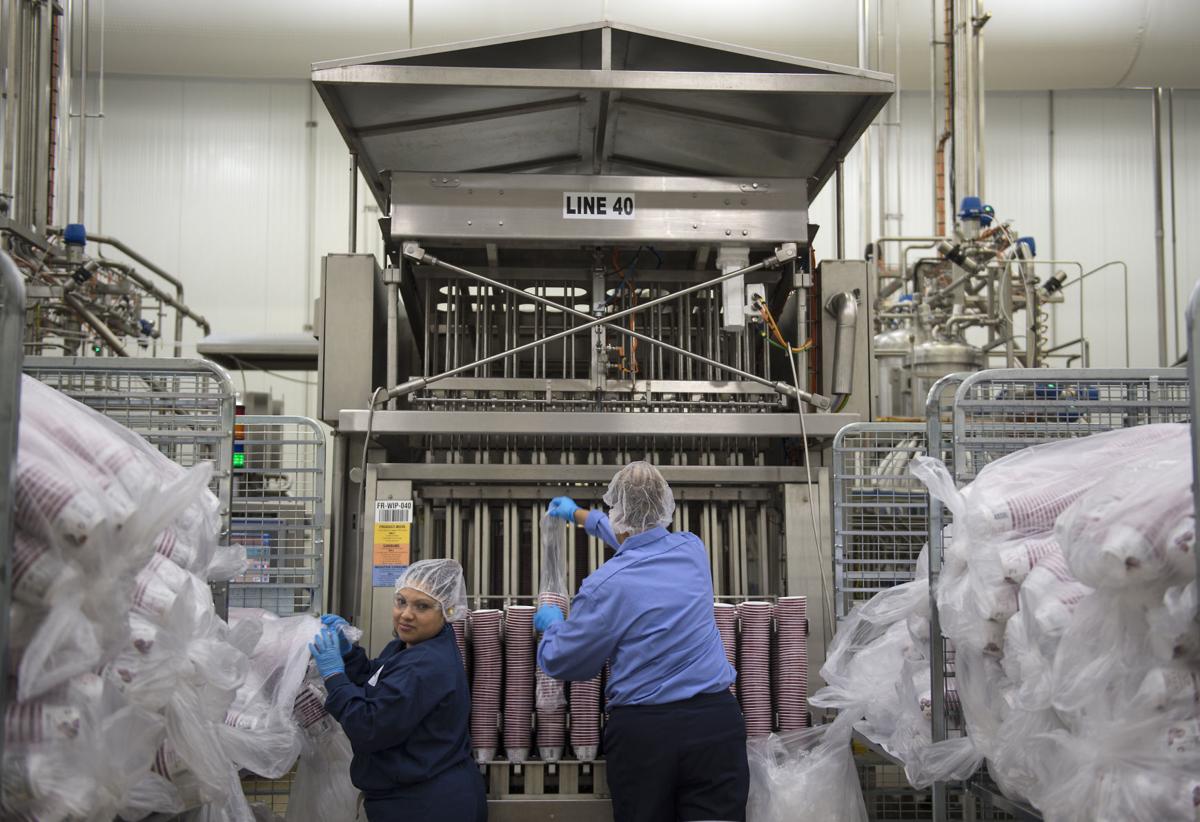 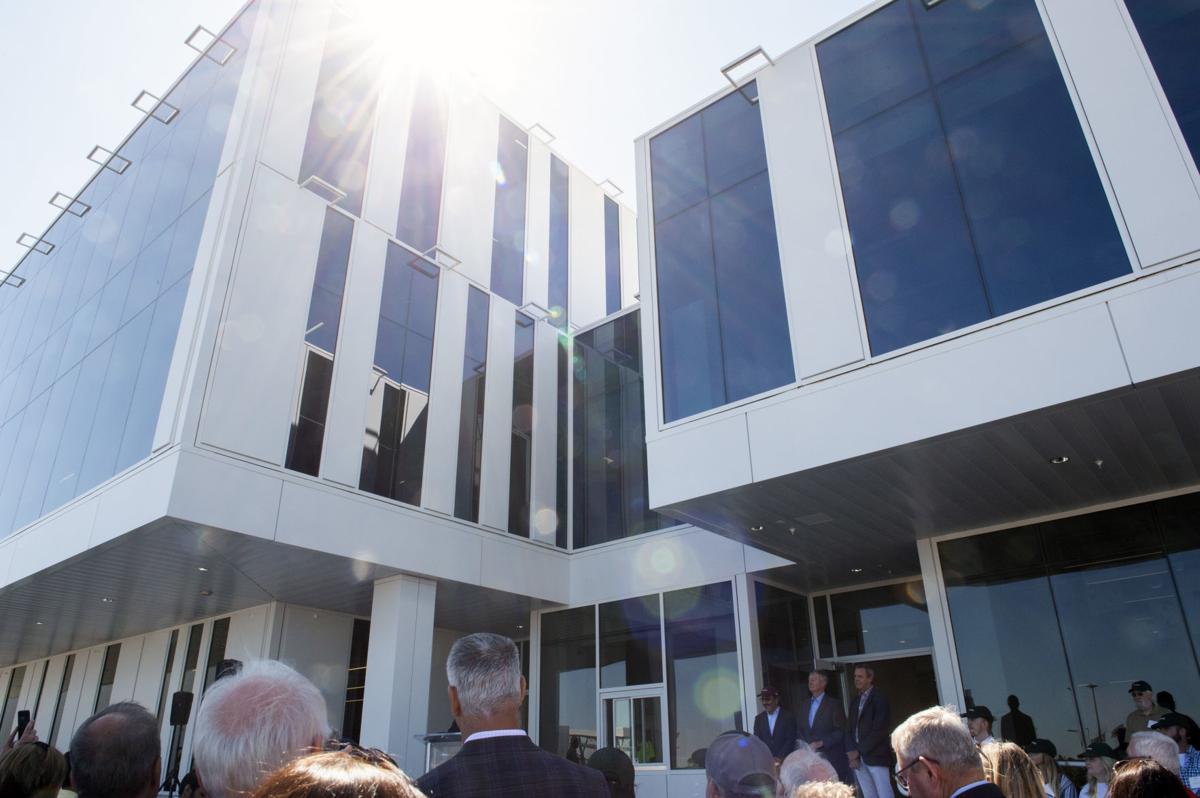 Now it’s diving into plant-based foods in earnest with a heap of oat-based drinks and blends — yogurt alternatives. The company is unveiling more than two dozen products Monday, including dairy coffee creamers and Greek yogurts with oatmeal, too. Some of the foods will hit shelves this month, while others will debut in January.

“We’ve been thinking about oats for a while,” Chobani President Peter McGuinness said. “We kind of think they’re the king of the plant-based world.”

Plant-based milk and yogurt alternatives have been exploding in popularity in recent years. McGuinness said within the plant-based sector, oats are becoming popular quickly.

“Cashew never took off,” he said. “Soy is declining dramatically. Almond is plateauing because of its nutritional delivery, taste and environmental impact because it takes so much water.”

Oat drinks started emerging a couple of years ago, and have become especially trendy in fancy coffee shops. Demand for non-dairy products for coffee has been growing rapidly.

Oat drinks and blends are more nutritious than other plant-based alternatives, McGuinness said. They’re tastier too, and it’s easier to get better textures with oats.

McGuinness said that sales for oat-based drinks are going to continue growing exponentially in the next few years.

Chobani’s oats are organic and sourced from Canada, specifically Saskatchawan. In addition to being organic, the oats are air and sun dried. McGuinness said that it’s possible the company could source oats from the Magic Valley in the future.

“The whole notion that you have to do plant-based at the expense of dairy is nonsense,” McGuinness said.

In McGuinness’ eyes, it’s important to distinguish between plant-based drinks and milks, and plant-based blends and yogurts. It’s not that one is better than the other, they’re just different, he said.

You won’t find the word “milk” on Chobani’s new oat drinks, and you won’t see “yogurt” on the oat blends. That’s a deliberate choice.

“We are purposefully not calling it milk,” McGuinness said. “That (would be) irresponsible.”

Chobani’s Twin Falls plant, the largest yogurt plant in the world, needed new equipment in order to bottle the oat drinks and creamers, which will be sold in cartons.

The company didn’t divulge the exact cost of the additions, but called them a significant investment. Chobani hired new workers in order to handle the expansion as well, but did not specify a number.

It’s been a busy year for new Chobani flavors. In addition to unveiling coconut-based foods, the company has also started selling yogurt will less sugar, Chobani Gimmies — a children’s product — and yogurts with nut butters. That’s in addition to a Farm Batch charity flavor.

McGuinness said Chobani’s market share for yogurt is higher than ever, and added that yogurt sales are on the rise again after some down months.

“There’ll be a lot of other things beyond oats,” he said. “It was never our ambition to end with yogurt.”

Shoppers will be able to buy Chobani Oat Drinks in four flavors: Plain, vanilla, chocolate and plain extra creamy. A 52-ounce carton will cost $3.99 at most stores. McGuinness said there were 125 iterations of the oat drink before the company settled on the final drink. There will also be a Chobani Oat Drink Barista Blend, which will appear in coffee houses in December.

There will be four Oat Blend flavors: Vanilla, strawberry vanilla, blueberry pomegranate and peach mandarin. The oat blends are packaged like yogurts. Those hit shelves sooner, starting this month, and come with a suggested retail price of $1.99. There will also be an oat blend with crunch, coming in strawberry granola crunch, blueberry almond crumble and peach coconut crunch. Those will appear in stores this month with a suggested $1.99 price tag.

Chobani is also launching dairy-based creamers, which will come in four flavors: caramel, sweet cream, hazelnut and vanilla. Those will sell for $3.99 a bottle and will go on sale in January.

Milk prices are good today, but five years of low prices have taken a toll on the dairy industry and Idaho dairies are feeling the pain.

Milk and cookies (but not for Santa): New Chobani flavor to help farmers

Chobani is launching a new limited-edition charity yogurt flavor in an effort to provide some farmers with a bit of relief from low milk prices.

When a group of dairy families opened Idaho Milk Products a decade ago, the company faced a murky future at best. Ten years later, after a $30 million plant expansion, it looks like the gamble is paying off.

Crash near Kimberly results in fatality

A juvenile died after being thrown from a vehicle during a crash on Idaho 50 near Kimberly.

Albertsons plans to bring Plated meal kits back to stores

Albertsons has announced that it will no longer sell Plated kits online but will bring them back to stores as part of the Boise grocery chain’s private label lineup.

Some car folks aren't impressed. But people are already reserving the car at the Twin Falls dealership.

A man charged with multiple drug and firearm felonies could face life in prison if convicted.

A Hailey man died after driving his Jeep off the side of Idaho 75.

For the first time, a Twin Falls canal is getting a plastic liner to stop leaks

“This is the leakiest stretch of our canal and it has been for 100 years. You can’t afford to leak as much as you used to, because water’s more valuable.”

Twin Falls retailers hire a whole bunch of workers to keep up with the chaos of holiday shopping.

Taking on big business: How Magic Valley shops compete against the chains

Big chains have been closing their Magic Valley stores as more people shop online. But some local retailers are fighting back — and succeeding.

A Buhl winemaker managed to make a rare and valuable barrel of ice wine this year.

Jerome County has given Agropur a tax exemption on the $15.4 million the company spent on its dairy processing plant this year.

After a few months of good prices, milk values have taken a tumble on the open market, in part due to the coronavirus outbreak.

Chobani is launching a PB&J yogurt and is donating all proceeds from the product to a national food bank organization.

Chobani is already the second biggest oat drink company in America — even though Chobani Oat has only hit shelves in November.

Chobani has a new non-dairy fermented drink and a modified yogurt that's lactose-free and protein-rich.

Chobani will have two new pumpkin spice products in stores this fall, along with two returning, seasonal, yogurts. 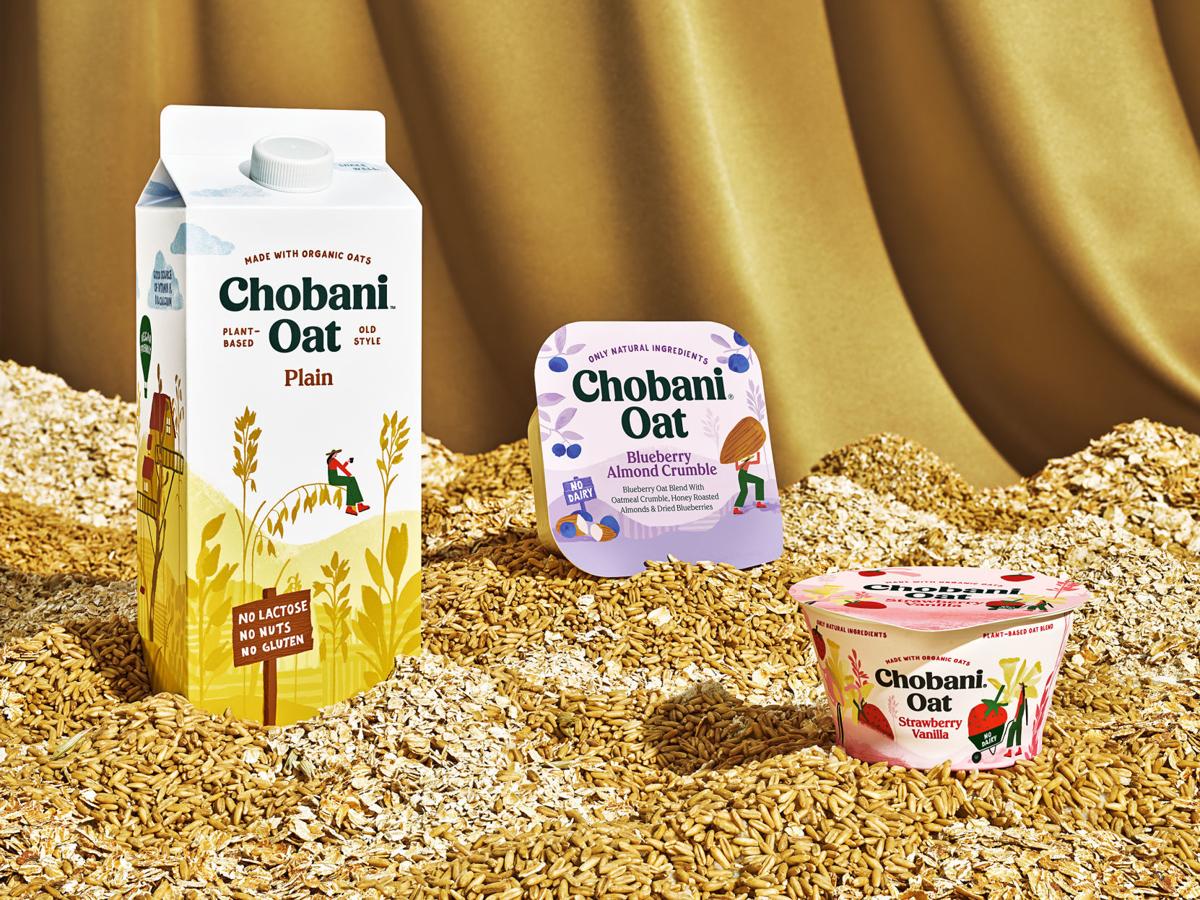 Chobani is unveiling a host of oat-based products. It's the company's second foray into plant-based foods.

Chobani says its line of creamers is made with natural, simple ingredients, unlike traditional oil-based creamers. 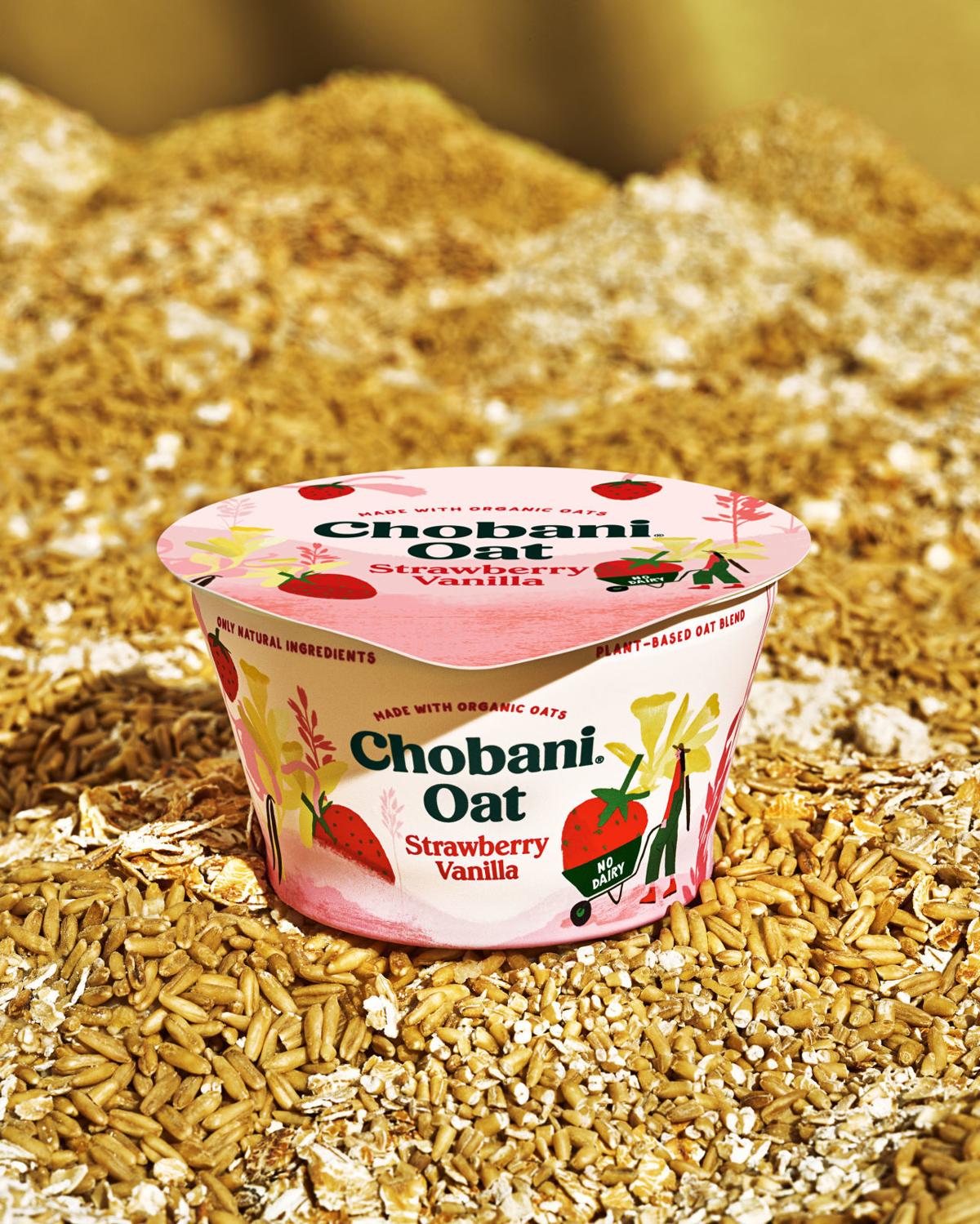 Chobani isn't calling its new oat blends and oat drinks yogurts or milks. 'We are purposely not calling it milk,' Chobani President Peter McGuinness said. 'That (would be) irresponsible.' 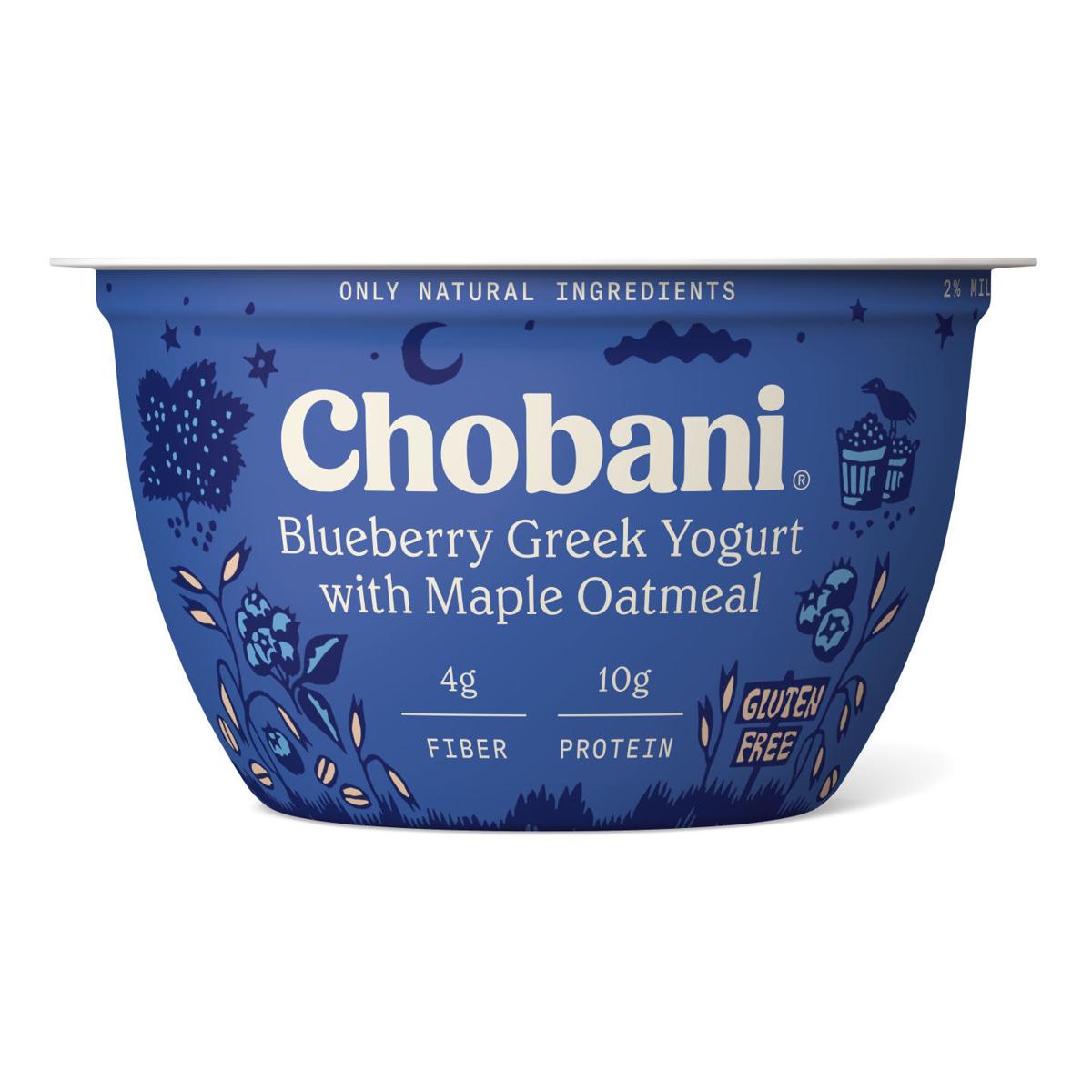 In addition to launching a host of oat-based products, Chobani is also unveiling Greek yogurts with oatmeal at the bottom. 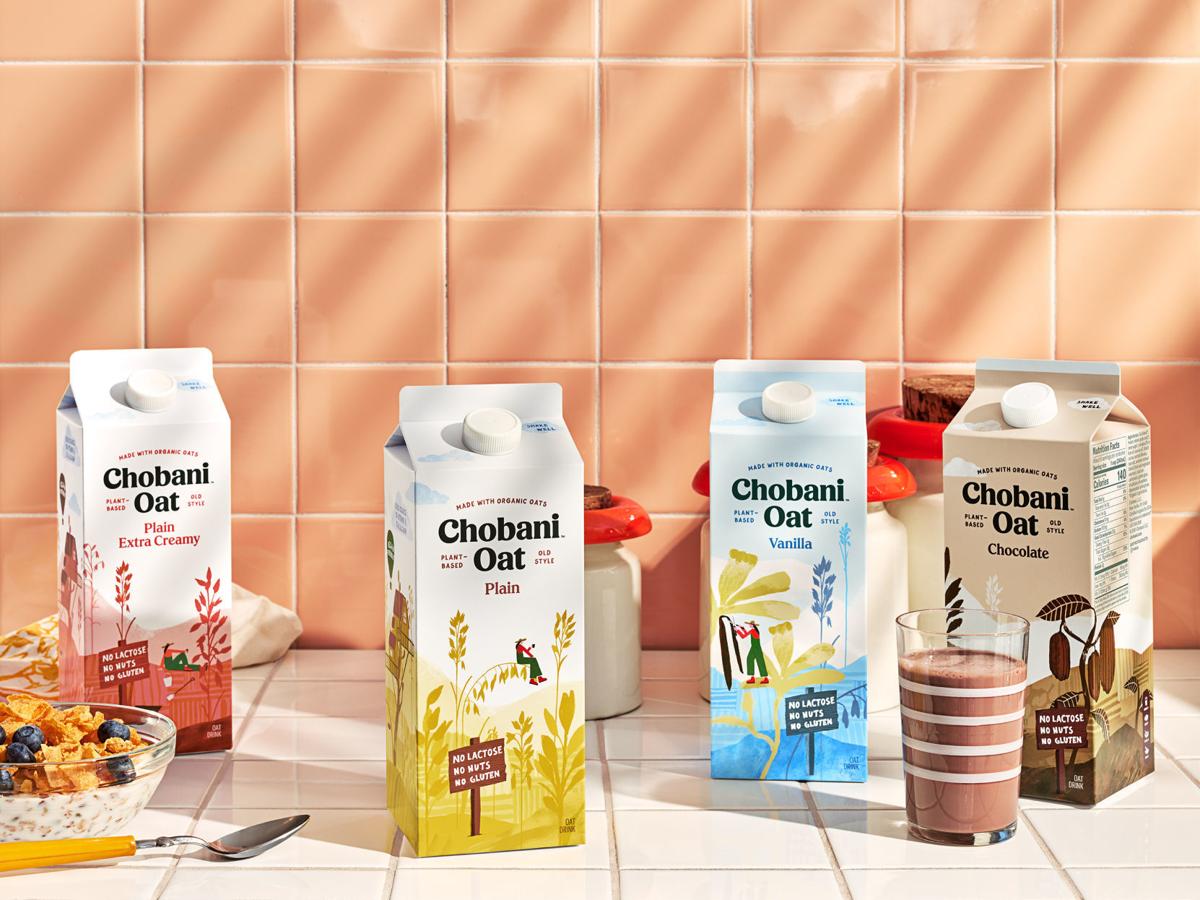